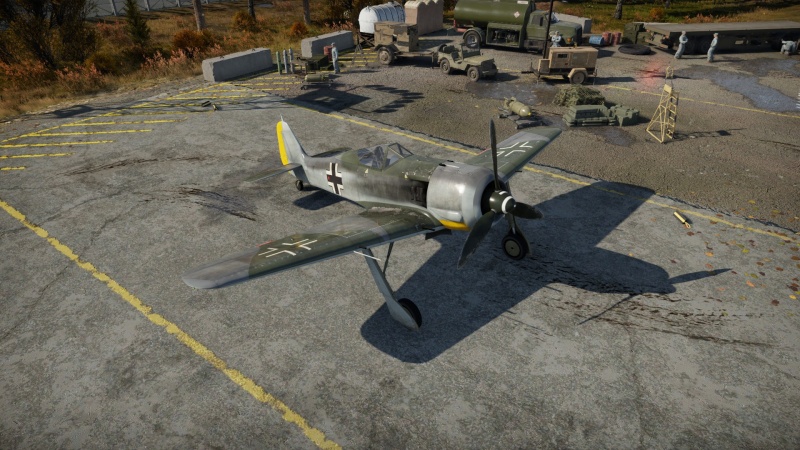 The best belts for the 7.92 mm MG 17, depending on your intended target:

The best belts for the 20 mm MG 151, depending on your intended target are:

The Minengeschoß (HEI) round is the star performer for this gun, so the belts that maximize that round are usually the best.

In the Modifications menu, both cannon are only listed as "Offensive 20 mm"; the MG 151 is on the left and the MG FF/M is on the right.

The A-4 is a punishing Boom & Zoom fighter. The armament is fantastic and dive speed/top-speed is very good. Use this to your advantage. As should be familiar now with the previous Focke-Wulf (and future models), the turning capabilities of this plane are very poor. Dogfighting is not recommended with the Fw 190.

The 190-A4's weapon set is fantastic, too. Four 20 mm cannons are more than enough to rip any plane to shreds and the backup MGs, while not particularly damaging against other fighters at this tier, are great for strafing light ground targets like AA guns. Your firepower is only rivalled by the Airacobras and the twin-engine heavy fighters.

Some planes, you might see which are very deadly opponents are the: Spitfires, Typhoons, Beaufighters, Mustangs, Yakovlevs, B-17s, XP-50s and the Wellingtons These planes should not be underestimated, they can all fight this aircraft extremely well.

After shortcomings of the A-1 were identified, the Fw 190 was continuously improved. This led to the following variants:

The Fw 190 A-4 saw combat extensively on all fronts: