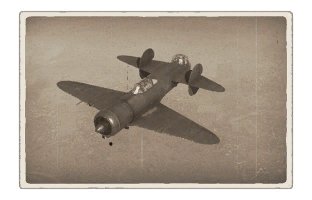 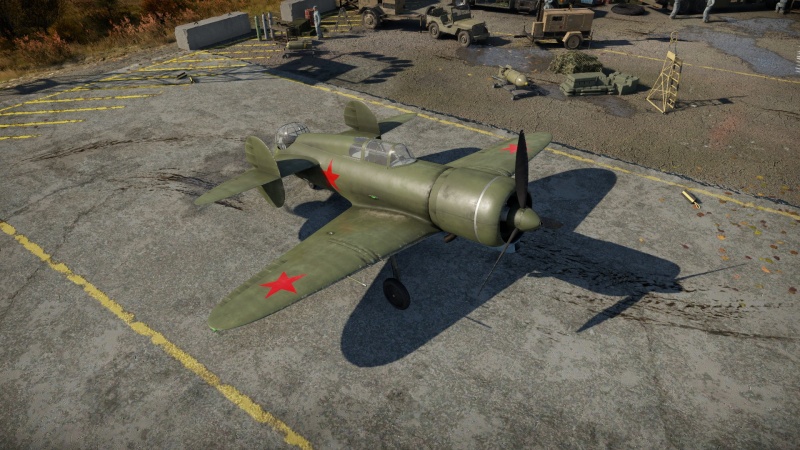 The Tandem MAI is a premium gift rank I Soviet strike aircraft with a battle rating of 2.0 (AB/RB/SB). It was introduced in Update 1.77 "Advancing Storm" during the 2018 Chronicles of World War II.

Tandem MAI is a tricky plane to learn at first; it has the speed to match most enemy fighters that it will face at the battle rating, but the manoeuvrability of the aircraft does not make it a great dogfighter. It can make small short turns to the side (a few degrees) but after a while it will have lost a lot of its speed, become heavy, and turning will be a slightly harder task to do which ruins its decent manoeuvrability fast. The climbing of the Tandem MAI is not the greatest but since it is given an attacker spawn so much climbing is not needed to be done for it. It can dive excellently and get out of dives easily.

Tandem MAI has an 8.5 mm steel plate on the backrest for the pilot and not anywhere else on the aircraft. This exposes the engine to be prone to getting shot out by enemy fire from the ground and air. It also leaves a lot of the internal structure exposed to damage, but even with the lack of armour plates and general armour, the Tandem MAI can take a heavy beating and still be fine to fly around with. One drawback with the Tandem's armour and survivability is the gunner is exposed to enemy fire from any angle. The gunner cupola and the area of plane where the gunner is placed not having any sort of protection makes the gunner survivability low. Its fuel tanks are self-sealing, and have a neutral gas pressurization system. Both fuel tanks are located in front of the pilot.

The Tandem MAI is armed with:

The Tandem MAI has four 7.62 mm ShKAS machine guns comparable to the I-16 and the I-153 in terms of firepower. The ShKAS have a high rate of fire and with four of them, they will make quick work of any enemy planes the Tandem MAI will face.

The Tandem MAI offensive armament gets to pick from 4 belts of choosing: Default, Universal, Tracers and Stealth belt, all of which are very effective against enemy aircraft.

Tracer or Universal belts are recommended for higher chance of setting the enemies on fire which is especially effective against bombers.

Stealth Belt are also a great recommendation, as a well-planned surprise attack will tear the enemy plane into shreds which will also take those who are not paying attention to surroundings by surprise.

The Tandem MAI can be outfitted with the following ordnance:

The Tandem MAI is defended by:

Defensive armament on the Tandem MAI is a single ShKAS (7.62 mm) gun that is in a cupola on the furthest back on the plane with a exposed gunner which makes it important to have a relative good gunner crew for it with preferably high vitality, fire accuracy and fire precision. The ShKAS defensive turret get three sets of belt to pick from Default, Armoured Targets and Universal belt. It is recommended to use the Universal belt to easily down enemy planes.

Tandem MAI is an excellent interceptor aircraft with an air spawn it can intercept most enemy fighters before they achieve the altitude to be out of its reach. Four 7.62 mm ShKAS to overpower the enemy slower rate of fire machine guns with its own high rate of fire makes it an excellent head on vehicle but comes with the high risk of getting its engine get shot out or damaged that will force you to return for a repair.

Missing an enemy and let it come from behind would worry any fighter/attacker/bomber mostly those with small arc of the defensive guns or no guns at all. But not for the ShKAS on the Tandem MAI. It can attack enemies from most angles except where the twin stabilizers are and directly below. But it has a great arc of fire to ward off any possible attack from the rear.

Ground attacking is not out of the picture for it but with a low capacity of bombs and small bombs makes it not the most efficient attacker role but it can be done and will need to be able to land the bombs as close as possible to the targets. If not it has four excellent ShKAS to take out light targets; for example, Howitzers, AAA guns, Armoured Cars and Trucks.

The Tandem MAI, also known as the MAI Sh-Tandem of Sh-MAI, was an experimental ground attack aircraft designed during the late-1930s by Pyotr Dmitrievich Grushin (1906-1993) at the Moscow Aviation Institute (MAI). An alternative way of thinking in the development of the Shturmovik or ground attack/light bomber plane, the Tandem MAI featured an unusual front- and back-wing configuration, with the stabilizers being nearly as large as the wings themselves, and providing 45% of the lift. This had the advantage of creating an aircraft with a center of gravity which was further aft than with conventional aircraft, allowing ordnance to be installed in the main fuselage. The aircraft unusually also had elevons: both the front- and rear wing were equipped with combined aileron/elevators.

Due to the unusual placement of the vertical stabilizers in a crucifix configuration on the horizontal stabilizers, this left the rear fuselage free for the installation of a turret. This in turn gave the added benefit of a single gunner being capable of defending a very wide area around the aircraft's rear gunner, rather than the conventional design of a single rear gunner whose field of fire was partly blocked by the aircraft's fuselage.

Three prototypes of the Tandem MAI were built between 1937 and 1939, with the aircraft being flight-tested by Pyotr Mikhailovich Stefanovsky (1903-1976). It built from a conventional, light wooden monocoque frame with plywood/Bakelite covering: this allowed for a quick construction, with the first prototype being built by an 18-man team in just 45 days. The aircraft was supposed to be powered by the 1,100 hp Tumansky M-88 air-cooled radial engine, but due to its unavailability the prototypes were powered by the 950 hp Tumansky M-87A.

The first prototype was built as a single-seat unarmed concept tester, which showed the viability of the design. This prototype passed its preliminary flight tests by January 8th 1939. Subsequently the aircraft was developed into its definitive two-seater form, with a cockpit which was set slightly more rearwards, and the tail gun turret installed. This second prototype was finished by late summer of 1939, with state tests held in September and October of 1939. The state tests concluded on October 10th, after 51 flights had been made. The results were disappointing: it was noted that the changed configuration over the single-seater greatly impacted on the type's performance. The aircraft had longitudinal stability issues and poor rudder response; it had poor take-off performance; the cockpit was found to be cramped; and the tail turret design imposed a severe speed penalty on the design. The test report suggested changing the tail turret to a tapered conical design. Most seriously, the front wing and landing gear were found to be insufficiently strong.

A third prototype was built with a number of improvements, such as a different installation of a structurally strengthened front wing to improve take-off performance. However, by this time interest in the Tandem MAI had waned, especially given its armament of four fixed and one trainable ShKAS machine guns and 200 kg of ordnance was seen as insufficient for future attack aircraft. Accordingly, all further development of the MAI Tandem was halted.