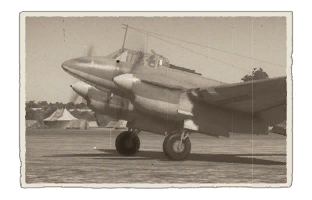 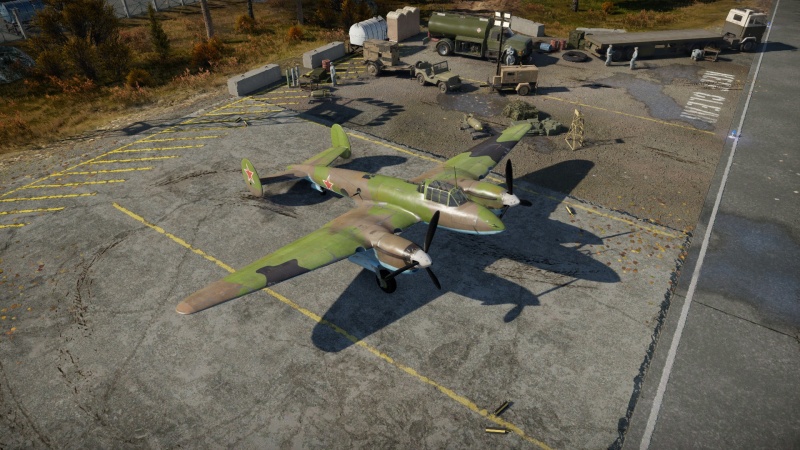 The Pe-2-205 Peshka is a premium gift rank III Soviet bomber with a battle rating of 3.7 (AB/SB) and 4.0 (RB). It has been in the game since the start of the Open Beta Test prior to Update 1.27. It was available for purchase in the store as a Peshka starter kit as soon as September 2012 until it was removed from the Gaijin store after the Clearance sale in November 2016. It was later obtainable from the Warbonds shop during January 2018 and was made temporarily available in-game for golden eagles (

The Pe-2 (or "Peshka", as it was nicknamed) is one of the fastest bombers in its battle rating. It relies on its speed and outstanding manoeuvrability (for a bomber) to evade interception. While its defensive armament is acceptable, it should only rely on its gunners as a last resort. The 12.7 mm UBT heavy machine guns covering the rear can be quite effective, but the waist 7.62 mm ShKAS machine guns are not very useful.

The Pe-2-205 can be outfitted with the following ordnance:

However, Germany launched the "Blitzkrieg" campaign in September 1939. Aside from their revolutionary usage of tanks, the campaign in Poland featured notable usage of Ju 87 dive bombers and showed their potential. Consequently, the Soviet authorities ordered the VI-100 to be redesigned as a dive bomber. Pressurization equipment and engine superchargers were removed, dive brakes were installed under the wings and the bombardier position was added to the nose of the aircraft(raising the number of crew members to three). A ventral bomb bay was added along with the two smaller bomb positions located at the rear of engine nacelles. Two rear-facing turrets, each armed by a single ShKAS machine gun, were installed to dorsal and ventral positions. Resulting aircraft, able to carry up to 1600 kg (3520 lbs) of bombs, was designated PB-100. The first prototype flew on 15th December 1940 and its performance (top speed of 540.7 km/h / 336 mph) was so good that Vladimir Petlyakov was released and the aircraft was named after him, thus receiving the designation Petlyakov Pe-2. The bomber was then rushed into serial production and deliveries to combat units began in the spring of 1941. The deliveries were, however, slow and by the time of the German invasion in June 1941, only about 458 Pe-2s were delivered.

By the summer of 1943, due to growing production volume and a general decrease in quality, the basic performance characteristics of production bombers had degraded to an intolerable level. The Factory No. 22 designers were tasked with drastically improving the quality of the bombers produced. The new chief designer, V. M. Myasishchev, was in charge of this work.

Crews noted the bomber's high manoeuvrability and survivability, the good field of view from the cockpit, and good stability during dives. At the same time, though, it was noted that the aircraft was rather difficult to pilot, especially when taking off and landing.