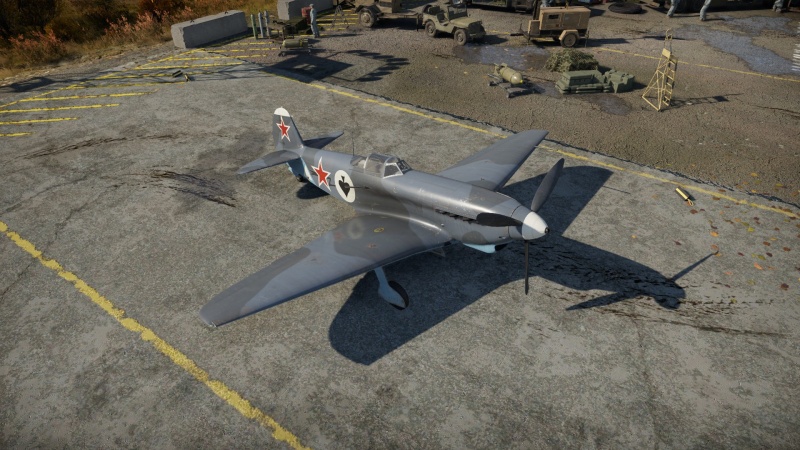 The plane is painted after the camouflage scheme of Soviet pilot Pavel Y. Golovachev in the 900th fighter squadron from February 1945 onward, where he piloted a Yak-9M plane during the Battle of Berlin.

Golovachev's Yak-9M is the only Yak-9M in the game. It features a distinct camouflage with pre-applied decals and text along the fuselage, setting it apart visually from its contemporaries. With a nose-mounted 20 mm and a 12.7 mm Berezin machine gun, it has a fairly effective armament for a Soviet fighter at this tier, though it is lacklustre compared to other nations.

The Yak-9M isn't the worst protected aircraft, but it isn't great either. It has some armour protection, and the fuel tanks are self-sealing. Most of the fuel tanks are located in the wings, and one is located beneath the pilot's seat in the fuselage, along with the oil cooler. All of the important modules are located in the inner wings or the front half of the fuselage. You can not rely on the armour of the Yak-9M, although it may save you on a rare occasion.

The Yak-9M cannot be equipped with bombs or any secondary ordnance, it should only be used an areal denial fighter to fight off enemy fighters and knockout bombers which pose a threat to the team capping the zones.

One of the advantages is the Yak-9M has a 20 mm shVAK cannon it can penetrate up to 27 mm, which is enough to knock out most enemy tanks by shooting at the roofs which are normally between 5-25 mm thick.

In a naval battles, the Yak-9M armament is enough to reap havoc upon the enemy patrol ships. The important factour is not to come in straight by instead climb and dive upon them like Zeus throwing a lighting bolt into the ground, when that bolt hits the ground it explodes! Make sure to lead the enemy ship and aim for the bridge, a few shots here with its 20 mm shVAK will sink the ship, if not cause major damage and knockout most of its crew.