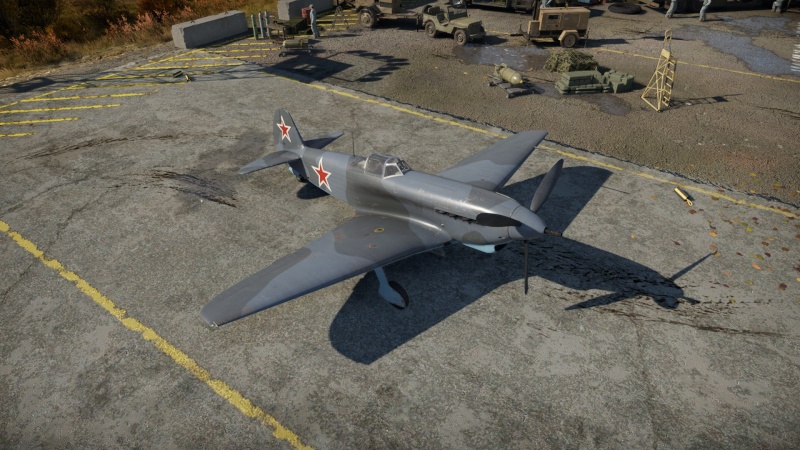 The configuration of the Yak-9K's engine is for excellent low altitude performance and manoeuvrability, though, without necessary turbo or superchargers, the aircraft's performance at high altitude suffers. The Immelmann speed of the Yak-9K is superior to the majority of comparable fighters at the same battle rating making it a capable dogfighter.

A Yak-9K offers good pilot protection, it is unlikely that a pilot snipe should occur. Due to strengthened structure and centralising of the critical components, it is a real possibility for a skilled pilot to clip an enemies plane with a wingtip and remain unscathed, either slicing the enemy's wing or disabling a propeller. Though the Yak-9K does have self sealing fuel tanks located in the wing, that does not preclude them from catching on fire.

The Yak-9K is armed with:

Most enemy fighters will be between 3,000 and 3,800 m, with bombers being around 4,000 to 5,000 m. It's important to use your height advantage, drop down from your height and and get behind the enemy. Once behind the fighter or bomber, do not engage until you are close enough to see their tails in your crosshair. Aim forward and fire only a single shot or a short burst which is no longer than two seconds. If you miss and they turn, pending how sharp the turn is follow them. If it's a very sharp turn do not turn with them, instead open the throttle and climb back up to gain a height advantage. Then either try it again or find a new bandit to knock out.

In ground and naval battles, the Yak-9K is able to destroy armoured targets with ease. It does not have any secondary armaments such as bombs or rockets. However, its 45 mm cannon is able to destroy heavy tanks. To do this, aim for the roof and dive straight down upon them like an angel that is fighting a demon. In ship combat, the 45 mm cannon is able to penetrate the decks of many heavily armoured ships, but you must aim for roof or sides of the ships. When handling smaller ships such as Patrol boats, do not fly in a straight line. Instead, zip up and down, left to right, then suddenly turn and shoot them. A single well placed shot will destroy their ammo racks and set the ship to visit Davy Jones' locker!