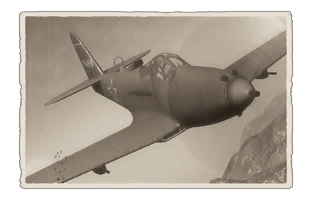 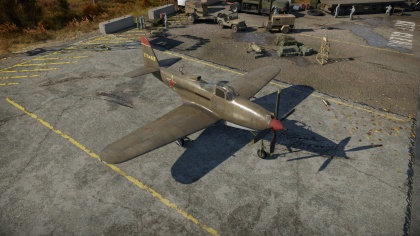 The ▂P-63A-10 Kingcobra is a premium gift rank IV Soviet fighter with a battle rating of 4.0 (AB/RB) and 4.7 (SB). This aircraft was introduced during Update 1.41 as a reward for the 2014 Summertime Madness event.

This aircraft is a good all-altitude fighter in Realistic battles. The P-63A-10 can out-climb most of its opponents, un-upgraded, although "sideclimbing" is recommended when the higher altitudes are reached. Its straight line speed, especially at higher altitudes, is respectable, competing with 109s of the tier. This aircraft has a poor turn-time at slower speeds, but as with most US aircraft, its high speed performance is significantly better than the aircraft it faces, making it a good boom & zoom aircraft. The improved 37 mm gun improves damage to aircraft, since the 4 x 12.7 mm Brownings are not greatly powerful at the higher tiers- the 37 mm gun compliments the 12.7 mms as a good bomber hunter, combined with the sleek profile of the aircraft. The aircraft is not intended, nor should be used, as a ground attack vehicle, since it can only carry one, 500 lbs bomb and the ammunition count for the 12.7 mm guns is not great, 250 rpg- the 37 mm gun can be used as ground attack, although this tactic isn't preferred by some as it reduces the ammo count as a whole for the aircraft, which is one of its limiting factors in combat. Tactically, the aircraft is good for small dives against turn-fighting opponents on the tail of your allies, from around 1,000 m or less above the target. Keeping any "side-climbers" down is normally good, since the speed and rate of climb allow the P-63 to catch these planes and send them back down.

The P-63A-10 (USSR) can be outfitted with the following ordnance:

An interceptor in any respect. Unlike most American designs the Kingcobra lacks heavy payload for ground attack duties. While the 37 mm can load anti-tank rounds, the plane will lose it's excellent anti-air HE shells. Of course the 12.7 mm heavy machine guns can be used against planes, in a ground attack role they are rather used on soft targets, as the AP shell lacks high-exlposive damage radius to deal with AAA & SPAA quickly. The AP shells also require more accuary while shooting and thus are inferior to the .50 cal Brownings on range e.g. with the HMG efective fire against light targets is possible from 600 m, but with the 37 mm AP shells this needs to be reduced to 400 m.