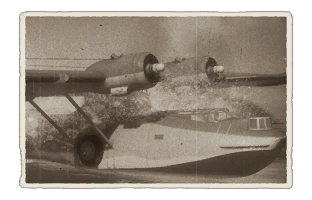 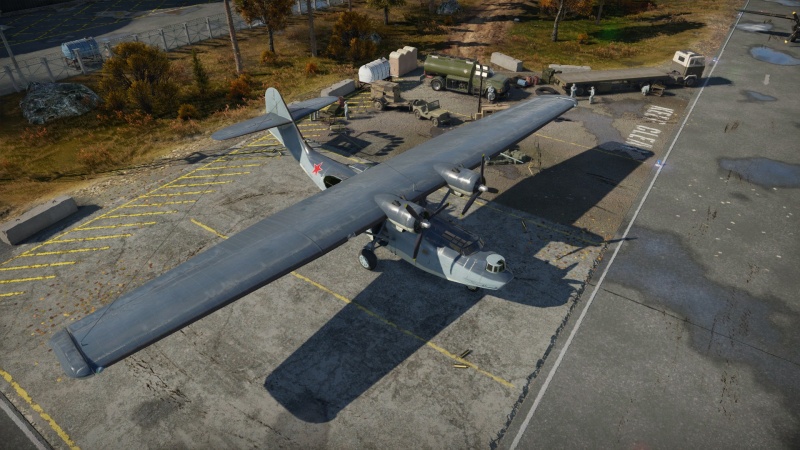 The ▂PBY-5A Catalina is a premium rank I Soviet medium bomber with a battle rating of 1.7 (AB/RB) and 2.0 (SB). It has been in the game since the start of the Open Beta Test prior to Update 1.27.

Although technically a medium bomber, the PBY-5's strategies are much like that of heavy bombers in higher tiers such as the Pe-8. It is best to fly high, as flying low will make you an easy target for fighters and AA. The best tactic for fending off enemy fighters is to use the rudders to direct one of the side gunners towards the attacking plane. It is also smart to use the guns manually in this situation, as the AI is often very inaccurate and will refuse to fire beyond a certain distance. In the worst case scenarios, a dive can be used to greatly increase the plane's speed to get to attack a ground target before a pursuing enemy fighter shoots it down.

The PBY-5a Catalina is slow and clunky, but it offers a heavy payload that is sure to be a game changer is used properly. It also has a very good defensive armament for its tier, which can occasionally be a saviour against an enemy fighter.

The plane is quite unmanoeuvrable, and its wings are very weak, being able to snap just by turning just a little too tight at higher speeds in a realistic battle. This version has landing gear, facilitating the task of landing significantly and enabling it to capture bases in Airfield Domination mode in Arcade Battles.

The PBY-5A Catalina (USSR) can be outfitted with the following ordnance:

The PBY-5A Catalina (USSR) is defended by:

Climb off to the side immediately, and attempt to avoid all contact with enemy aircraft for as long as possible. The large bomb load will allow you to take care of bases easily, but the fact that this is a flying boat will prevent you from defending yourself in all directions. Never forget this aspect of the Catalina: It's defenceless against attacks from below.

Any vehicle with a 12.7 mm guns or higher or anything with a majority tracer filled belt. The 50 cals can easily disable your very much exposed engines and control surfaces, and tracer belts quickly ignite the exposed fuel tanks.

Many enemies, due to your low rate of climb and slow speed, will engage you from above and in front. As the Catalina only has a weak gunner on the front, it is vital to engage them early if they approach from this direction. Scaring off enemies should be your main tactic if they approach you in any other direction, though using the rudder to twist your plane will allow you to use the rear gunners effectively against enemies behind you.

The PBY-5 flying boat and the PBY-5A amphibious aircraft, all-metal parasol monoplanes, were developed in the Consolidated Aircraft Corporation's design bureau under the direction of Isaac Laddon under the designation of Model 28. A prototype XP3Y-1 flying boat made its first flight on March 21, 1935. Full-scale production began in September 1936.

Full-scale production of the PBY-5В version began in 1939. This variant of the flying boat had a new tail assembly with a more angular rudder and 1,200 hp Pratt & Whitney R-1830-92 Twin Wasp fourteen-cylinder, air-cooled engines. The plane's defensive armament was reinforced: The 7.62 mm Browning M2.3 machine guns in the aircraft's gun placements were replaced with large-calibre 12.7 mm Colt-Browning M2.5 machine guns with 800 rounds each. Transparent drop-shaped blisters were installed on each side of the boat instead of sliding hatches. The aircraft's equipment was also upgraded.

At the same time as the PBY-5, Consolidated Aircraft designers developed an amphibious variant with retractable tricycle landing gear. The main wheels were hydraulically raised and stored in open bays between struts connected to the wing. The XPBY-5A prototype made its first flight on November 22, 1939. The amphibious variant proved heavier than the PBY-5 flying boat, losing speed, ceiling height, and flight range, but these disadvantages were fully compensated for by the aircraft's increased combat capabilities.

Catalinas of various versions were in service with the USA and countries of the Anti-Hitler Coalition, including the USSR, where they were delivered as part of the Lend-Lease program.

The Soviets' naval aviation suffered a heavy crisis in the second half of the war. The enormous losses from the first years of the war went practically unremedied by any deliveries of new seaplanes from the aircraft industry. What the Soviet naval aviation industry could offer did not meet the standards of the time, either. Unable to provide their troops with domestically produced planes, the Soviet leaders had to ask for help from the Allies.

The Catalinas that served with the Soviet Naval Aviation force were discarded from 1954 to 1957.