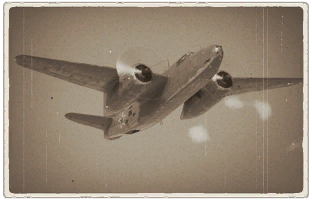 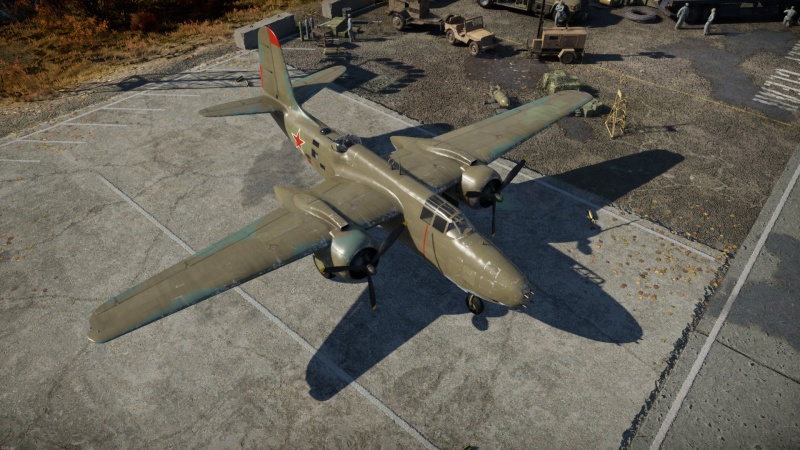 The A-20G-30 is rather well-protected. It sports 3 defensive .50 calibre guns, two in a dorsal turret capable of complete rotation, the other in a limited arc under the aircraft's tail. As for the armour, the pilot is protected by 57 mm bulletproof glass and several 12.7 mm steel plates in front of and behind, and 8 mm plates to his sides. The only thing to look out for is the chance of the tail section ripping off at a higher rate than its other bomber and ground attacking comrades.

The A-20G-30 (USSR) can be outfitted with the following ordnance presets:

The tail section of the plane creates a big blind spot for the dorsal turret. Be careful when enemies approach from behind because you will not be able to hit targets directly behind you.

The A-20G-30 was a modification of the American A-20G-25, thus it excels at attacking soft targets such as howitzers and SPAA. The 6 x .50 calibre guns situated in the nose are fully capable of destroying light pillboxes en masse. While still capable of hitting bases with its 2 x 1,000 kg bombs, this aircraft is more effective with loads that contain larger numbers of bombs for soft targets.

With the 6 forward-facing .50 calibre guns and a decent turn time and rate of climb for a twin-engine aircraft, the A-20G-30 is well suited for the role of heavy fighter. Be warned, the A-20G-30 does not have the energy retention of dedicated heavy fighters like the Bf 110's in the German tech tree. This could lead to the aircraft being destroyed in such a dogfight.