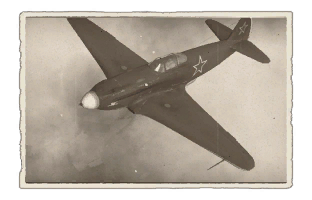 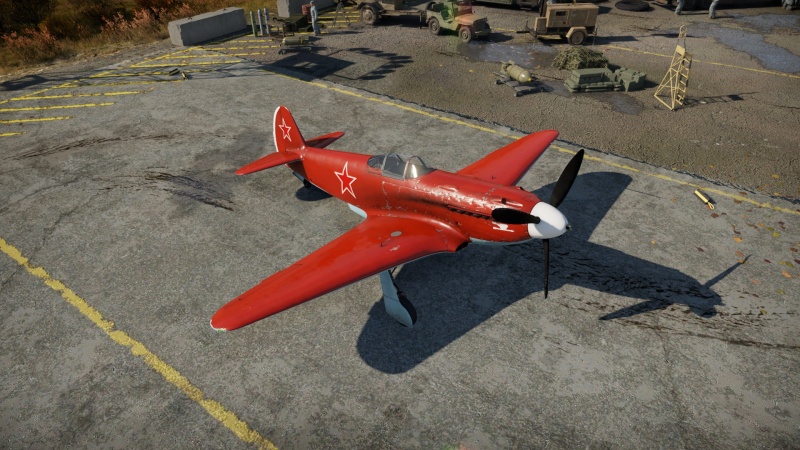 Like most Yaks, the 3P has good manoeuvrability, and you can out-turn pretty much everything except for the A6M, some of the Bf 109s, and Spitfires. Fortunately, the 3P also has another ace-in-the-hole. In arcade mode, WEP provides a very good rate of acceleration, so running away from a battle poses no challenges. However, the climb-rate is also pretty good, but not as great as the Spitfire or Fw 190. Thus, Yak-3P is one of the best "dive-into-battle" and destroy planes. Performance is terrible above 3 km. Below that altitude performance is fantastic.

In Arcade mode, this is one of the best planes available. The wings are not affected by high speeds, so you can push the 3P to the limits. However, in RB or SB, watch your speed if you use Boom & Zoom. Any speed higher than around 660 km/h (410 mph) will cause the control surfaces to lock up and any attempt to make a hard turn at this point will break your wings. The 3P also has really bad high altitude performance, so you are limited to around 2,000 m before your speed and performance drastically decrease.

Unlike the Yak-9s and 7s, the 3P is a fully composite plane. This means the wings have higher durability than the wooden-supported Yak-9, but it is still recommended you do not push the plane's manoeuvres to the limits, as the wings will still break in a high-speed dive or manoeuvres. The engine will also overheat extremely quickly.

The Yak-3P does not have a lot of protection in armour plates, it only offers protection from the rear of the cockpit, with a steel plate behind the pilot, a thick bullet proof glass head rest, with a small steel panel installed above it.

The durability of the plane is not great. Try not to be shot at all, because even a Spitfire with 8 x 7.7 mm can set you aflame.

The armament is fantastic- three 20 mm cannons mounted in the nose can rip apart pretty much every plane you will face. However, they do not pack the punch of Hispanos or AN/M2 cannons, or the unlockable belts, for that matter. Thus, it is recommended you research the belts as quickly as possible because the Ground Targets ammunition will increase performance markedly. One great advantage of the B-20M/S cannons is that they take much longer to jam than their American/British cannon counterparts. Watch your ammo count, it's best to attack at an angle with short bursts to maximize damage while preserving ammo.

The Yak-3P is much the same as the Yak-3, however it has some differences such as armament, instead of the one cannon and two machine guns. It has no secondary armament, thus using it as a ground attacker or bomber is not advisable, it lacks the ordnance to perform that role. It should only be used as a fighter, using the boom and zoom tactic, to dominate and own the battlefield of the deep blue sky. A Yak-3P is equipped with three cannons, two B-20S and a single engine mounted B-20M.

The armament provides the Yak-3P with some of the best armament at its rank. The three cannons are able to make quick work of any enemy aircraft, using short bursts of about one second are able to knock the enemy aircraft out. The placement of the three cannons are all located in the front of the fuselage, making accuracy very good, at all ranges.

To get the best out of this legendary aircraft, climb between 4,000 and 5,000 m, it will only take a few minutes to reach this height. Once at this height level off and keep your eyes open, find an enemy target you want to engage and overshoot it then dive down on to it. Cut the throttle back as you dive, if you don't watch your speed, you will rip the wings clean off.

Most enemy fighters will be between 3,000 and 3,800 m, using your height advantage, drop down from your height and and get behind it. Once behind the fighter, do not engage until you are close enough to rip them in half with your three 20 mm cannons. If you miss and they turn, pending how sharp the turn is follow them. However, if it's a very sharp turn do not turn with them, instead open the throttle and climb back up to gain a height advantage. Then either try it again or find a new bandit to knock out.

Engaging enemy bombers, since the Yak-3P does not have any frontal protection the engine will get shot out or badly damaged, to mitigate this do not travel in a straight line. Instead, zig-zag behind it, the additional benefit of this move makes it harder for the enemy to knockout your pilot. The Yak-3P does not have any bullet proof glass on the front of the canopy, allowing enemy machine gun or cannon fire to penetrate inside of the cockpit from the front.

Since the Yak-3P has three powerful cannons, a short burst on the enemy tail will see that the slight surfaces get ripped off. Then move to one of the wings and fire a two-second burst, this will knock the engines out and cause fuel leaks in the wing, which can turn into fires if you have a HE round on your clip.

By September 1943, yet another improved variant was ready, designated Yak-1M Dubler, on which the canvas skin on the tail section was replaced with 2 mm plywood, and oil and water radiators were improved. The Dubler also had a new mastless antenna, a ring sight instead of a reflector sight, improved armour and a new propeller. Test pilots were impressed by the new prototype. Their report stated in part: "Yak-1M possessed excellent horizontal, and especially vertical, manoeuvrability. Top speed greatly improved compared to earlier serial-production Yaks. Despite the improved performance, the aircraft remains easy to fly and does not require extensive pilot training."

A single-seat monoplane fighter with a composite construction, retractable landing gear and a closed cockpit.

A modification of the Yak-3 fighter with improved armament consisting of the 20 mm Berezina B-20M engine cannon and two synchronized 20 mm Berezina B-20S cannons installed instead of the synchronized machine guns. Since the B-20 cannons were modifications of UB machine guns with an increased-calibre barrel, the fighter's design required practically no changes. The aircraft's empty weight increased by only 11 kg, while the weight of its armament and ammunition ended up even lower than that of the Yak-3 with its ShVAK cannon and two large-calibre UB machine guns. The change in weaponry had no detrimental effect on the aircraft's flight characteristics.

The Yak-3P fighter was armed with one B-20M engine cannon with 120 shells and two synchronized B-20S cannons with 130 shells each. All the cannons were fired using a compressed-air electric mechanism. The PKI-1 sight replaced the PBP-1A sight.

The Yak-3P had a strengthened airframe (particularly the wing), and clasps were installed on the extra landing gear panels. The aircraft received the new RSI-6M radio.

The experimental Yak-3P completed its maiden flight on 23 March 1945. The fighter went into series production at several aircraft plants only a few days before the end of the war, so it never reached the front. From August 1945 and to the end of series production, all Yak-3 fighters were built exclusively to the standard of the Yak-3P. In total, 596 were produced between April 1945 and the middle of 1946. The last of them served until 1950.