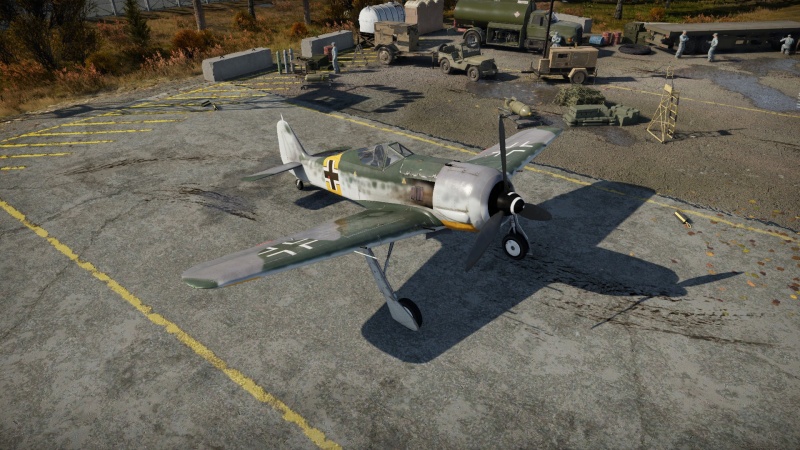 Würger is the German nickname of this beast of a plane. It can be translated as a slayer, choker, or strangler. In that regard fits the English designation well too: Butcher-bird

190s are fighters, and while this one can load additional payload, it will reduce the plane's combat ability. Using it as a fighter-bomber is generally not advised, this would be the duty of the Fw 190 F-8 instead.

Rocking four 20 mm cannons, an armoured radial engine, armoured fuel tanks, and sometimes two artillery rockets, this aircraft is far from shy in the role of giving and taking. Anything at 12 o'clock is soon to be dead. The wing root mounted cannons should be additionally placed on a separate key for head-on attacks. The outer-wing guns would only miss on distances of 800-1,000 m (~0.7 miles). This also helps for tricky shots since the second pair of 20 mm cannons only have 90 shots each, instead of the whopping 250 of the inner ones.

The rockets are an interesting piece of equipment. Developed from the 210 Nebelwerfer artillery system, they were initially used to break up B-17E formations by forcing the US pilots to evade them. The main goal of the rockets was not to destroy the bombers; instead, this tactic meant separating the scattering bombers, allowing the attacking aircraft to get closer to their targets safely without the crossfire of coverage. The Gr.21 has the same shell drop as the MK 108 cannon, so if you are already used to it from flying the 109, well done. If not, which wouldn't be a surprise as this is the page for the Fw 190, then prepare for some misses. Like the "Sledgehammer" Mk 108, the accuracy is woeful and is not made better by its low velocity. This is a characteristic noticeable in the game, which makes them difficult to use in direct fighter to fighter engagements. But all of these deficits are made up by the warhead. Oh boy. They've got power. With the fuse timer set correctly, even misses will damage enemy planes, as the shock wave radius gets close to 100 m. So watch out when using them against ground units as there is a good chance you will likely kill yourself in the process., Keeping over 100 m safety distance is strongly advised!

The Fw 190 A-5, as all the planes in this line, is one of the best Boom and Zoomers in the game and should be flown exclusively in this style. The performance at high speeds is excellent, as is their dive and zoom characteristics. Do not ever engage in a turn fight, as this will most likely end badly. Instead, fight only in the vertical. Try to have an altitude or speed advantage over your opponents (by climbing to the side at the start of the battle and then enter the highest battle you see). But you can still win fights when you are lower in energy than your foe.

In the defensive, you can often dive away from planes, such as Spitfires and La-5s. Still, you need to be at a decent altitude to gain your top speed, so do not be too quick to dive after an enemy, if they fly below your plane, unless you are higher then everybody else or alone. Just be sure to have the time to regain the lost altitude.

In a dive, due to its short wings, the Fw 190 can pull some stunts to either lose the hunter or even make him lose his wings! This is a promising strategy against La-5s, Yaks & Spitfires, who have low wing loading (and partly wooden wings for the Russians), less resistance against high G manoeuvres. Again, be sure to regain your energy by a zoom-climb. Just look out while doing so, many pilots die as they do not notice a second enemy aircraft approaching. German proverb: Wenn Zwei sich streiten, freut sich der Dritte. ~ "When two quarrel, the third will reap the success." Of course, this could also be you.

A single-seat all-metal cantilever monoplane with a low wing.

An aircraft designed by the Focke-Wulf Flugzeugbau GmbH design office under the direction of Kurt Tank. The designers intended to build a new easy-to-operate fighter with powerful weaponry and a durable structure. In contrast to the Bf.109, the "race horse", which sacrificed speed for operational qualities, the FW.190 was to become the Luftwaffe's "work horse".

The first prototype FW.190V1 took its maiden flight on 1 June 1939. The aircraft went into series production in June 1941 and appeared on the Western Front in August.

In November 1942, the FW.190A-5 variation went into series production. This model differed from the A-4 series in that the forward section of its fuselage had been slightly enlarged. This measure significantly improved the fighter's responsiveness. The aircraft's design and equipment had changed slightly in other respects as well. It had been equipped with a new horizon indicator and an advanced oxygen system. The FuG25 identification friend or foe (IFF) repeater had become a standard part of the aircraft's radio equipment.

The FW.190A-5 was powered by the 1,800 hp 14-cylinder twin-row air-cooled Bayerische Motoren Werke BMW801D radial engine with a double-speed supercharger and a direct fuel injection system.

In the standard fighter variation, the FW.190A-5's guns consisted of two 7.92 mm synchronized Rheinmetall-Borsig MG17 machine guns in the fuselage above the engine with 1,000 rounds each and two 20 mm synchronized Mauser MG151/20 cannons in the wing root with 250 shells each. It was sometimes equipped with two 20 mm Ikaria/Oerlikon MG FF cannons with 90 shells each, mounted on the wing panels outside the propeller's radius.