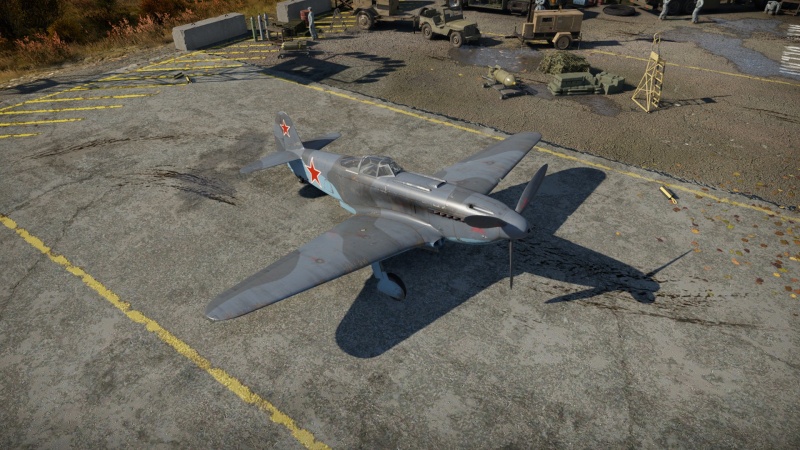 The Yak-9 was a further modification of the Yak-1 and Yak-7B. In its core design, it was a redesign of the Yak-7. With few external differences, Yak-9 was at the same time much more advanced internally. This is not unexpected, as almost two years of design and combat experience of the Yak series went into the Yak-9. Also, at the time aluminium was in much greater supply than it had been two years previously at the start of the war. Amongst other things, the use of metal allowed the plane's weight to be significantly reduced, meaning that more fuel could be stored and that the aircraft could be equipped with more powerful armament and more specialised equipment.

The Yak-9U is an up-engined Yak-9 equipped with the M-107A engine. It sports competitive speed, far above average turning and roll abilities, good acceleration, a high dive limit (by USSR standards), and keeps nice and crisp controls from speeds as low as 250 km/h to 750 km/h. It is arguably the most underestimated vehicle rank-for-rank in the game and is often skipped by players who view it as just another Yak-9.

Unlike previous Yak-9s equipped with the VK-105PF engine, the Yak-9U gets a significant upgrade in the form of its M-107A engine (which also happens to be the engine utilized by the premium Yak-3 (VK-107) and the later Yak-9P/UT). As such, the Yak-9U is one of the fastest planes at sea level at this BR and retains excellent performance up to ~6 km where it can effectively engage higher-speed American and faster climbing German planes. This, combined with the excellent handling and turn-fighting qualities allow the Yak-9U to effectively dictate any engagement- a pilot can turn-fight Bf 109s and P-47s with ease while having the capability to outrun slower yet more manoeuvrable vehicles such as the Spitfire.

At sea level, the Yak-9U can catch most, if not all, planes at its BR, including P-47 and P-51D. Beware, however, as the Yak airframe isn't particularly durable in a dive and will rip at speeds above 720 km/h IAS. Thankfully, forcing an opponent down low effectively seals their fate as you and your team perform optimally at low altitude.

The Yak-9U offers incredible speed, acceleration, climb and manoeuvrability with the same complementary firepower. Unlike its VK-105 powered predecessors, which suffered significant power loss above 3,500 m, the VK-107 engine of the Yak-9U retains decent performance up to 5,000 m, allowing you to partake in the initial dogfight of a match without being at a massive disadvantage. Once the air battle has gone down to a lower altitude, your engine performance will go from good to incredible. With a sea level top speed of nearly 600 km/h there's not many planes that can catch or outrun you. Your acceleration, climb rate and energy retention are superior to most other aircraft as well. The turn rate, while not top notch, is still better than a good portion of your competition.

However, the Yak-9U is not without its flaws. The engine suffers from overheating at lower altitudes, and WEP should be used sparingly. Usage of Manual Engine Controls will slow down the overheating, but not eliminate it. Engine performance above 5,000 m is lacking compared to aircraft of other nations.The armament, while perfectly adequate against fighters, will struggle against heavier targets, and engaging heavy bombers is not recommended unless you're confident in your ability to get a pilot snipe. Due to a somewhat low wing rip speed, most aircraft will outdive you. The acceleration below 200 km/h IAS is poor compared to most fighters, and stall fighting should be avoided unless you started the fight with an energy advantage.

After takeoff, you should immediately start climbing up to 5,000 m. The optimal climb speed is around 250 km/h IAS. When initially engaged with the enemy, it's best to start off the fight slowly. Avoid losing altitude immediately. Try to employ hit and run tactics and conserve your ammo. Once all of the enemies in the area start dogfighting and losing altitude, it's time to become more aggressive. With the loss of altitude, you can start to capitalize on you excellent low down engine performance. Stick to boom and zoom tactics if possible, but don't be afraid of engaging in dogfights if necessary. If you find yourself in a bad situation, know that you can outrun and outaccelerate just about any plane that you can meet. Use your superior speed to disengage, and then re-engage after you've built up and energy advantage.

The Yak-9U offers no bombs, rockets or any secondary payloads, it is an air supremacy fighter armed only with machine guns and cannons. They must be used to defend your ground forces or naval fleets from enemy bombers and fighter bombers. Stay high, use the boom and zoom tactics to your advantage - do not strafe tanks or ships, the 20 mm cannons only offer 120 rounds which will be needed in any air to air combat engagement.

During December 1943, the creation of a new airframe (Yak-9U) allowed the installation of the M-107A engine, which was more powerful than the previous VK-105PF. The engine mount was brand new and included individual faired exhaust pipes, wings, and fuselage structure that was made of metal while the whole aircraft received a covering of Bakelite skin. The horizontal tail surfaces were slightly reduced in order to afford the aircraft improved pitch control. The oil cooler intake was re-positioned from beneath the nose to the port wing root as well as an enlarged radiator bath being moved further aft under the fuselage. A supercharger intake was centred on the top decking of the engine cowling. The rear antenna cable was moved inside a lengthened rear canopy which featured a more aerodynamically refined shape with a modified fuselage deck contour. The The typical armament of the Yak-9U was a 20 mm (79 cal) ShVAK cannon with 120 rounds that was fired through the aircraft's hollow propeller shaft, and two 12.7 mm (50 cal) Berezin UB machine guns with 340 rounds. 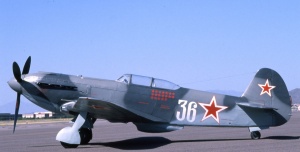 January to April 1944 marked the commencement of State trials and revealed that the Yak-9U had a superior top-speed compared to all fighters in service on the Eastern front at 6,000 m (19,685 ft). Unlike the I-185 the Yak-9U was a much simpler to fly and stable aircraft. Ultimately the M-107A engine inherited all the problems of the VK-105PF engine. The engine was prone to overheating, oil leaks, loss of engine pressure during climbs, spark plugs constantly burning out, and intense vibrations which would fatigue assembly bolts leading to a short engine life. These defects forced the first production batches starting during April 1944 to be powered by the reliable M-105 PF-3 engine. Further changes would include the fuel capacity of the Yak-9U being upgraded to 400 L (106 US gal) and in order to re-balance the aircraft, the wings where moved 9.906 cm (3.9 in) forward and the aircraft's VlSh-107LO propeller being replaced with the older VISH-105S. A total production of 1,134 aircraft where constructed by December 1944.

The model in-game does not sport the production batch's modifications as it is the prototype trial model.