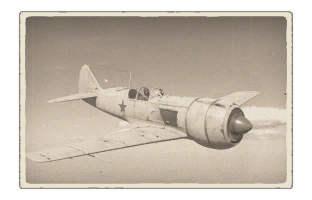 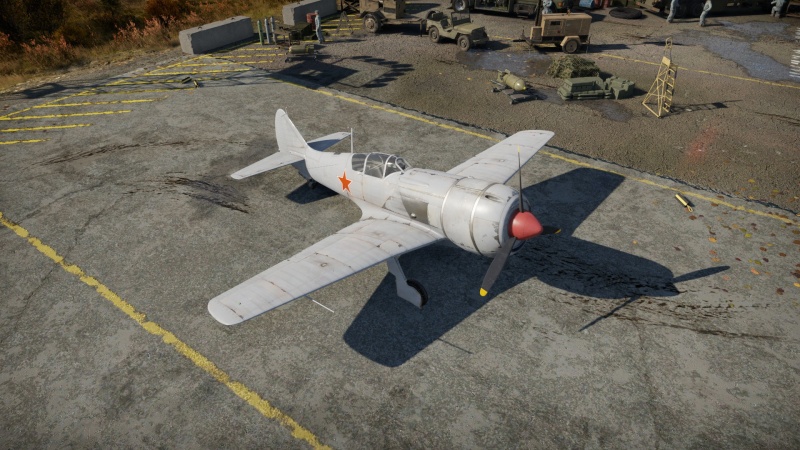 The La-11 is a premium gift rank IV Soviet fighter with a battle rating of 5.3 (AB/RB) and 6.0 (SB). It was introduced as a premium pack in Update 1.65 "Way of the Samurai" and was removed from the store after the 2018 Summer Sale. It was again made available briefly as part of the 2021 Summer Sale.

The La-11 is a long-range version of its brother, the La-9. Most of its flight performance is identical, besides a heavier weight due to additional fuel tanks. The weight itself is in fact the culprit, making La-11 underperform compared to the La-9. At full load, it performs nowhere close to its predecessor, while with lighter loads it makes it fairly identical to the La-9. Therefore, bringing less fuel is suggested for better flight performance.

Like the La-9 and many designs from Lavochkin Design Bureau, the La-11 is specialized at below 4,000 m (around 13,000 ft) thanks to its M-82FN engine found on many earlier Soviet air-cooled propellers. This engine, at 1,650 hp when spaded, could push the La-11 up to 680 km/h at 6,200 m albeit with worse performance compared to liquid-cooled engines at such altitude. Staying below 4,000 m is required for optimal engine output, which might become a problem when being suppressed by late WWII propellers at higher altitudes.

Thanks to its development era at very early Cold War, the fuel tanks were equipped with nitrogen generators which helped to suppress a fire if the tanks were penetrated, making it less prone to being set aflame.

The protection itself is nothing to be proud of: a 55 mm glass-plate up front at the windshield and a 66 mm one at the back, as well as a 8.5 mm steel plate in the lower rear side of the cockpit. It might absorb some damage from 12.7 mm MGs, but anything beyond that calibre can finish off the pilot with ease.

The NS-23 cannons are common to players who played Yakovlev fighters as well, mostly fitted in the engine cowl with fairly few rounds. In the La-11's case, it has 225 rounds to spare with 75 rounds per guns spread around the engine fairing, one less gun than its predecessor. The calibre of this gun alone is feared by many aircraft including the heaviest bombers. A few accurate shots from the "Air targets" belts can ruin their day quickly with ease. Heavier planes will also suffer from severe or even lethal damage. But do keep in mind that 225 rounds in total is not good news for trigger-happy players, so fire these guns in short bursts.

Upon quick inspection of the La-11, players can find some noticeable differences from the original La-9: one less cannon and the removal of the cooling system under the fuselage. The plane itself performs like a less powerful version of the La-9 with longer range, so players of La-9 will quickly feel like home.

A common feature of Lavochkin aircraft is the air-cooled engine and the La-11 is no exception: the same M-82FN engine is retained from its predecessor so in terms of speed and acceleration; aside from the fact that the extended range costed manoeuvrability reduction on La-11, at lower fuel time, the fighter performs just like a La-9 does. While the engine is powerful enough to accelerate the plane to 680 km/h at higher altitude, this plane is not a high-altitude interceptor with its sluggish performance against fighters at similar tier; so keeping the plane below 4,000 m and waiting for teammates to pursuit fighters to lower altitude is the better option. With its acceleration, it helps La-11 to make powerful strikes upon fighters which have been bailed from a manoeuvre, three 23 mm NS-23 cannons can make very short work of any enemy with ease. Alternatively, if players feel confident with their gunnery, these cannons also serve as a great head-on weaponry thanks to its positioning and a fairly straight ballistic. With some trick moves, you can even win a fight against P-47s in one piece!

But keep in mind that the La-11 suffers from subpar, or sometimes even inferior directional control when the plane is at around 700 km/h, which can be common if you have to chase down fighters which have been baited down, so it is essential to learn how to compensate the directional control with your ailerons.

Overall, the La-11 is still a fighter that players can enjoy; while the firepower and low-altitude acceleration is sufficient, most of the time, you will have to face fighters that can be up to 3 km above you, which is very challenging to deal with.

The Lavochkin La-9 (NATO: Fritz) was among the very last propeller fighters in the world, starting its fairly short life in the VVS in 1946. While the aircraft was still under the prototype name of La-130, VVS suggested that Lavochkin should further improve the range of La-130; the new design, which was rushed out just 6 months after the commission of La-9, was later renamed to La-134, aka La-9M. The new La-9M was tested by A.G. Kochetkov in May 1947, with many modifications over the original La-130 design and most of all, up to 1,130 litres of fuel could be held instead of the original 825l. This meant a 571 kg increase in full-load weight and after flight tests it was concluded that La-9M could perform like a La-9 only when around 600 L of fuel was carried.

The new La-134/La-9M then passed for certification and was renamed to its current name - Lavochkin La-11 (NATO: Fang) in the same year; assembled at Factory 21 (UAC Sokol Aircraft Plant in Nizhny Novgorod) under the factory name Izdeliye 51. It was manufactured until 1951 when newer jets were already soaring through the skies, which also marked the end of propeller fighters; the aircraft scored very few victories over its enemies due to the late introduction and were mostly used as trainers. Most of them were then transferred to Soviet allies such as the KPAF and PLAAF, where they would have a second life before they were finally all replaced by jets.