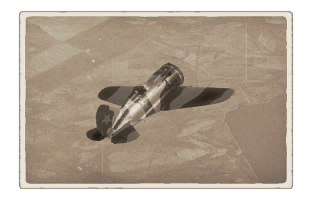 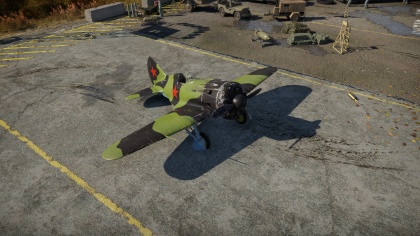 The I-16 type 18 has an outstanding turn time. It can outmanoeuvre anything in the sky at its BR including the Spitfire. This can be even better when deploying flaps. It has a small engine, and because of that has a low maximum speed. It doesn't like to climb, the engine overheats quickly. For maximum efficiency stay below 2,000 m (6,500 ft).

The I 16 type 18 has, like all I-16 a weak structure. The only armour is 6 mm (0.23 inch) steel in the pilot's seat. It has a small engine, but it's easily hit. The engine can't withstand much damage and gives way quickly. The structure can't take many hits, but it's easy to avoid being hit because of your manoeuvrability.

The I-16 type 18 is a classical turn fighter. It can carry rockets which are effective against bombers near the ground, and ground targets. However its main role is getting the enemy in to a turn fight. Then it's easy work: get in to the enemy tail and shoot. Its main opponents are: the Spitfires, any biplane, Bf 109s, and Hurricanes. It's easier to shoot down less manoeuvrable planes like the Hurricane than the Spitfire. You should NEVER go head on in this plane unless you have rockets and fire them from at least 2 km (1.24 mi) away. Watch out for boom and zoom aircraft because they can come quick and surprise you.

Although ground pounding ability is limited, there are still bombs and rockets to choose from. The 2 bombs can effectively destroy pillboxes or tanks while the rockets, with accurate aiming, can destroy 3 targets. Once the suspended armaments are gone, the 4 MG are good for soft targets like trucks, artillery and AA cars.

This flying boat is like a low-tier Be-6. Its huge fuselage is very spacious and can absorb lots of bullets and shells. It also has lethal defensive firepower: two 7.7mm in the nose, four forward-facing, two on the top and four at the tail, so attacking from behind, in front or above aren't the best options. Dive under it and suddenly pull up to shoot its defenseless underpart. Aim at the engines, avoid shooting the fuselage.

The I-16 was a Soviet single-engine monoplane fighter designed in the 1930s by the Polikarpov Design Bureau. As early as 1939, few remained unconvinced that the era of the I-16 was ending. Even the installation of the more powerful M-62 and M-63 engines did not allow serial examples to exceed 500 km/h. For some time, it was believed that better performance could be achieved with the use of the M-64 engine, rated at 1,200 to 1,300 HP. Designers expected the M-64 (there was also an M-65) to be ready by 1941; however, this nine-cylinder radial engine was never adequately completed. Nikolai Polikarpov, the lead designer, attempted to improve the I-16's aerodynamics by replacing its canvas outer skin with plywood. In the summer of 1939, a prototype with upper wing surfaces covered with 2.5mm thick plywood was tested; at the same time, an I-16 Type 28 with plywood surfaces was submitted for state trials. The latter achieved 489 km/h, which was slightly better than other variants. However, the achievement was chalked up to the new M-63 engine.