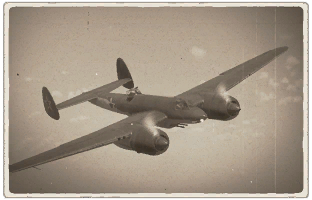 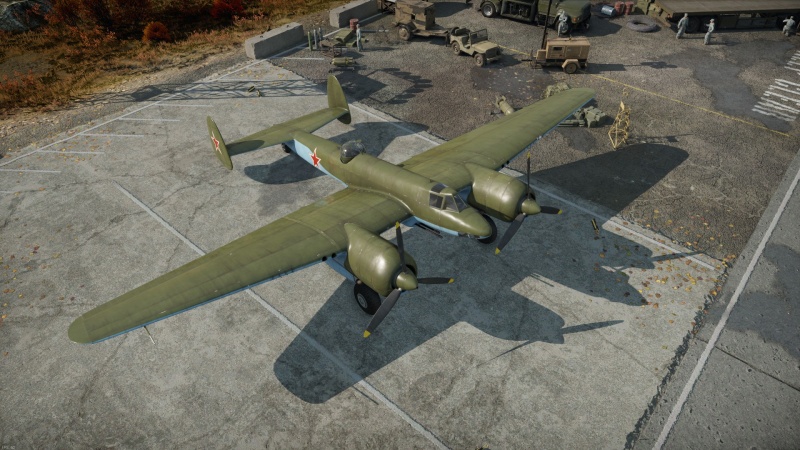 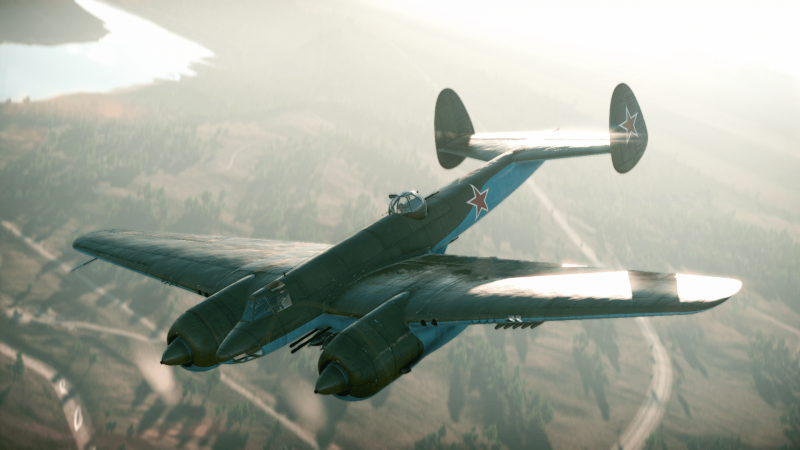 The Su-8 is a premium gift rank IV Soviet strike aircraft with a battle rating of 4.7 (AB/RB/SB). It was introduced during Update "Winged Lions" as a reward for Battle Pass: Season VI, "Firepower".

The flight performance of this plane is extremely sluggish, despite having a combined total of 4,000 horsepower, the plane still struggles to perform most manoeuvres. It has a poor turn radius, low lock-up speeds, and has a subpar climb rate compared to other aircraft at this BR. In mixed battles, the performance is made even worse with suspended ordnance options, which can up to 1,500 kg of additional weight. The plane does however have a silver lining, at low speeds, landing flaps can provide a very high amount of lift, which allows the plane to turn on a dime. The flaps can withstand speeds no more than 280 km/h (155 mph), but they can allow for the plane to make sharp turns to get into position to use the 45 mm cannons or establish a bomb line.

The Su-8 has copious amounts of armour, similar to other Russian strike aircraft such as the IL-2. This means the Su-8 can withstand incredible amounts of punishment, especially from machine gun fire. Dual engines allow the plane to return home if one is taken out, and pilot armour protects the pilot in any head-on engagement. The Su-8 should take every head-on engagement possible for this reason. In addition to pilot armour, the rear gunner also has good protection from the front and back of the aircraft.

This is a premium aircraft, which means all modifications will be unlocked when this plane is obtained.

The incredible NS-45 cannon seen on the Yak-9K is mounted on the Su-8. However instead of one cannon, the Su-8 wields four of these monstrous cannons. The armoured targets belt can penetrate the roof of every tank at the Su-8's BR, as well as the sides of many lightly-armoured vehicles. There is a price to pay for having such incredible armament. The recoil on these guns is extremely significant, it is recommended to fire in very short, controlled bursts. The recoil on this gun is effectively a stopping mechanism, as it can bleed so much speed when attacking a target, that you'll need to continuously adjust lead for every shot you fire. The gun velocity is pretty good, however it does not compare to the German MK 103 tank busting cannon, which has a much higher velocity. You'll need to calculate for gun drop when shooting at ground targets from a distance of more than a kilometre.

The smaller calibre ShKAS machine guns are also an important asset to this aircraft's success. They have an incredibly high rate of fire, and the Su-8 has eight of them. This is an incredible amount of bullets, and any soft AI target in Air Battles will be completely obliterated by a short burst. Once again, this incredible feature has a price to pay. The guns have a tendency to jam rather quickly, so short bursts are the key to success. The guns are also mounted very far away from the nose. Gun targeting needs to be set correctly in order for maximum effect, 500 m or so will be good for attacking ground units and spraying at pesky fighters.

The Su-8 can be outfitted with the following ordnance presets:

The Su-8 is defended by:

The team at the Sukhoi Design Bureau submitted to the 1940 competition for for the Red Army Air Force a project of a single-seat twin-engine aircraft with the promising M-71 engines, which were supposed to provide good flight characteristics even when using a large payload weight. After the initial approval of the idea and the first recommendations received from military authorities, the production facilities of aviation plant No. 289 were hastily evacuated to the city of Molotov, since the German army was approaching Moscow. Despite the turmoil and confusion associated with the relocation of production facilities,work on the aircraft's design continued and went on until the end of the war.

While development was in progress, the aircraft became a two-seater, the engines received an afterburner mode, armor was significantly increased, and firepower increased drastically. The final factory tests on the Su-8 took place only in the spring of 1945, when the attack aviation niche was occupied by Ilyushin aircraft and the latest IL-10 was already in service, the components and assembly of which had been mastered in production. The Su-8 attack aircraft was not submitted for state testing and the project was closed in 1945.