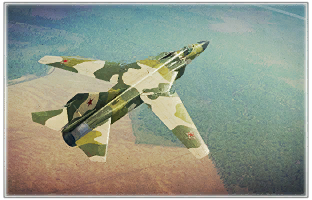 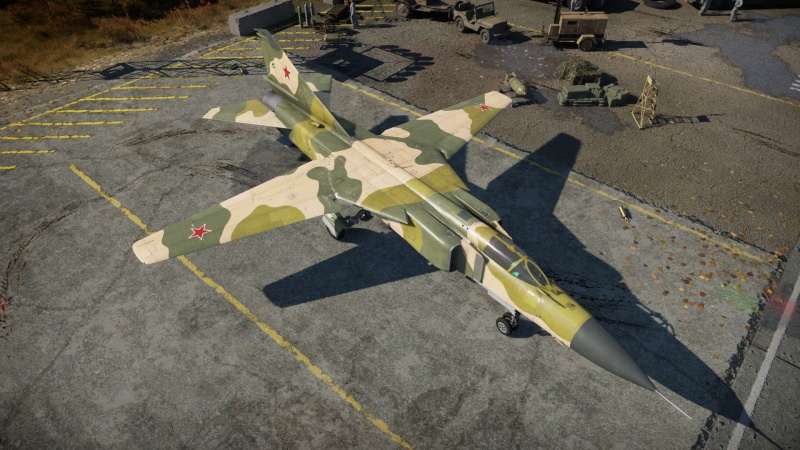 The MiG-23MLD is the ultimate production fighter variant of the "Flogger" family. Though it still looks quite similar to the MiG-23M, there are a great number of improvements: the airframe is lighter, aerodynamic refinements like vortex generators and a revised vertical stabilizer have been installed, the engine is much more powerful, and a new avionics suite allows it to use the R-24 series of medium-range missiles instead of the MiG-23M's R-23s, among other changes. The MLD fixes many of the MiG-23M's shortcomings and continues to improve on its strengths. The end result is well-rounded fighter with excellent performance and potent armament, a worthy opponent to other top-tier jets like the JA37C Viggen and F-4EJ Kai Phantom.

The MiG-23MLD's performance leaves little to be desired. The MiG-23M boasted a high top speed but was somewhat underpowered; this is very much fixed on the MLD because its engine is 20% more powerful, and as a result its thrust-to-weight ratio practically matches the F-104S and MiG-21bis. It has an excellent climb rate exceeding 200 m/s at sea level and fantastic acceleration, particularly at transonic or supersonic speeds when the wings can be swept back. Thus, the MLD will have few issues rushing to the front lines, climbing for an altitude advantage, or chasing down a fleeing opponent.

The MLD is also very competitive in dogfights. As on the MiG-23M, the swing wings fundamentally allow for good sustained turning at low to medium speeds provided the wings are swept forward. The MLD's vortex generators, dogtoothed wing gloves, and superior thrust-to-weight enhance its turning performance further. It can reliably beat any F-4 Phantom in a turning engagement, and it can at the very least keep up with if not outplay agile opponents like the MiG-21bis and JA37C.

There are a few quirks to watch out for. First, the MiG-23MLD's excellent engine power means that it will quite easily reach its rip speed when flying in a straight line on full afterburner, so be mindful of the IAS. Second, though it has great acceleration and climb rate at transonic and supersonic speeds, the manoeuvrability in these zones can be a bit sluggish or wobbly at times, so keep that in mind when trying to score high-speed snapshots, and in situations requiring turning or precise aim it's best to slow down and allow the wings to sweep forward a bit.

The MiG-23MLD is armed with:

The MiG-23MLD still retains the 23 mm GSh-23L cannon with 200 rounds from the MiG-23M. It has an excellent rate of fire and will likely do significant damage if it hits a target, but the muzzle velocity is unimpressive and it can be a challenge to aim it properly in high speed engagements. It's generally best to reserve the gun for extended dogfights where the MLD can use its manoeuvrability to pull lead on a slower target. The limited ammunition supply means that the average pilot can only expect a kill or two with the gun before needing to go back to base.

The MLD has a far healthier supply of countermeasures than the MiG-23M. It retains the pack of 12 countermeasures installed in the central underbelly pylon but now features the twin 30-round dispensers installed on the wing gloves, first seen on the MiG-27M. There is no need to be as stingy when flaring incoming IR missiles or using chaff to disrupt a radar lock. Also, these are still "large calibre countermeasures", so on a unit basis they have stronger effects than standard flares or chaff.

The MiG-23MLD can be outfitted with the following ordnance presets:

The MiG-23MLD has similar loadouts to the MiG-23M. The main difference is that it has access to R-24R and R-24T missiles, which are straight upgrades to the R-23R and R-23T missiles. The R-24s are deadly missiles, but the MLD is still limited to carrying only two of them. The R-23s should only be used as stopgaps before the R-24s are unlocked.

For ground attack, the MLD can use various unguided bombs and rockets. The only guided air-to-ground option is the Kh-23M MCLOS missile. It does have a ballistic computer but it can only provide CCIP guidance for the guns/gun pods and rockets. As dedicated attackers, the related MiG-27M and MiG-27K are much better options.

The MiG-23MLD is a fairly forgiving fighter that can be used for many approaches. Players who want to beeline straight into battle and jump in dogfights will be satisfied by its great acceleration and dogfight performance. Those who prefer to hang back can use its climb rate to build up altitude and energy while observing the battle below. From this point, fans of long range combat can sling the R-24R radar-guided missiles to snipe targets at long range or low altitude, and opportunistic pilots can sneak in from the sidelines and use the IRST in conjunction with the R-24T IR missiles to eliminate distracted targets. The MiG-23MLD does not reign supreme in the pure beyond-visual-range role because it can only carry two R-24Rs compared to the four AIM-7E-2s or Skyflashes carried by the F-4EJ Kai Phantom II and Phantom FGR.2 for example, so one should plan on getting close and dogfighting at some point to not let the MLD's full capabilities go to waste.

The R-24s should be used wisely because of their limited capacity. R-24Ts in particular are excellent for sneak attacks against distracted targets because of their range, manoeuvrability, and tracking, but they can still be spoofed by flares if the target sees it coming. The R-60Ms are more plentiful, which offsets their high flare sensitivity, and should be preferentially used in close combat. Ideally, one can wait until opponents have run out of countermeasures and/or are no longer in a good position to make evasive manoeuvres.

The MLD can pull harder than the MiG-23M because of its aerodynamic improvements, which is definitely good for nosing onto targets, but if optimal rate fighting performance is desired, it's best to keep the airspeed at or above 600 km/h by managing the elevator.

The MLD's radar now features an ACM mode to quickly and conveniently acquire targets in dogfight scenarios, which can be helpful if one needs to use the R-24R or desires radar cueing for the IR missiles.

The F-14 Tomcat is a very capable and popular aircraft in the American tech tree. Facing against a F-14 will be inevitable for pilots of the MiG-23MLD. However, there are certain actions a MiG-23MLD pilot can take to make the encounter a more even fighting chance.

Firstly, a MiG-23MLD pilot should be familiar with how to defeat certain radar search and tracking ability. While flying low can help with defeating the standard searching radar, the F-14 like the F-4J before it is equipped with Pulse-Doppler (PD) radar. PD radar can enable the aircraft to lock onto other aircraft against the ground clutter. However, this can also be countered by "notching" the aircraft by flying perpendicular to the PD radar lock (as in making sure the PD radar lock in the Radar Warning Receiver (RWR) is at the 3 or 9 o'clock direction from the aircraft). This will interfere with the PD radar's ability to lock onto the MiG-23MLD. However, be aware that the MiG-23MLD is unlikely to be "invisible" to a F-14's radar as the F-14 has the ability to use a "Track-While-Scan" mode to identify enemy aircraft on the horizon. So while the MiG-23MLD pilot can deny the F-14 an easy lock for them to utilize a SARH or ARH missile, they will be aware that the MiG-23MLD is present in that general direction.

Once a F-14 has been identified, three different threat envelopes need to be recognized.

So now that the F-14's capabilities are familiarized with, how should a MiG-23MLD pilot attack a F-14?

Perhaps the most successful way is to go after tunnel-vision F-14 pilots from medium range. F-14 pilots at any altitude would be concerned about using their radar to engage enemies with long-range missiles. Therefore, a MiG-23MLD would find it productive to instead fly towards the sides of the map, away from the straight path towards the enemy airfield. The loadout to bring would be the IR-guided R-24T and pilot's choice of R-13M1 or R-60Ms for the short-range IR missiles. Once a decent distance from the friendly airfield alongside the sides of the map (position roughly 30-40% between friendly airfield to enemy airfield), make sure there are no enemy aircraft also in the area before turning towards the center of the map, this way you can meet enemy F-14's vector perpendicularly for an optimum attack angle.

Utilize the MiG-23MLD's IRST function instead of the standard radar in order to not trigger the F-14's RWR, and use IRST to lock onto F-14s from a long-distance for the R-24T. Once a lock can be acquired, utilize the R-24T's extremely wide uncaged seeker to compensate the lead for the F-14's speed and direction. Once within an optimum distance (roughly 5 km), fire the R-24T towards the F-14. While it may be tempting to watch the R-24T seek its target, the MiG-23MLD pilot should instead disengage and try and locate another target for its other missile. It is up to luck at this point and the F-14 pilot's awareness if they notice the incoming R-24T before it destroys their aircraft.

However the engagement carries out, the MiG-23MLD pilot needs to be aware that the F-14A is a formidable plane and should be prioritized appropriately with allies. Most importantly, recognize that fighting a team of F-14As is not a one-pilot deal; utilize allies to help break off tailing F-14s or take down distracted F-14s to whittle away their numbers to annihilate the enemy team.