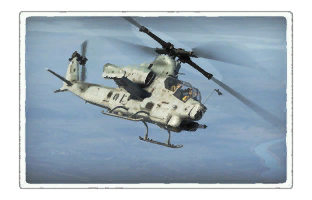 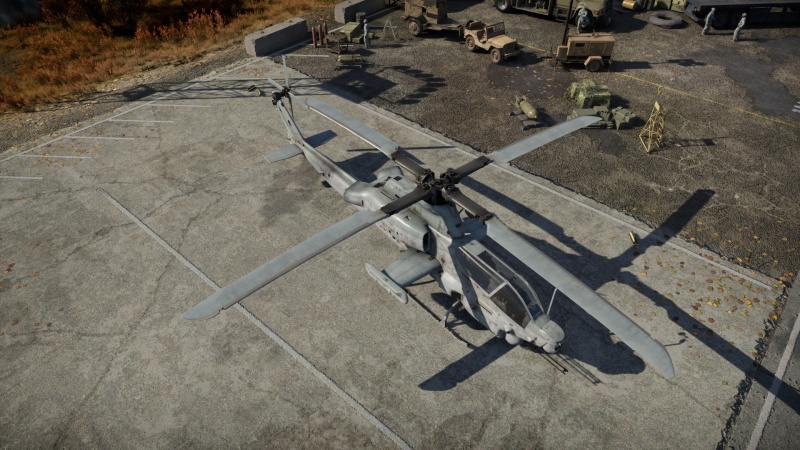 When fighting the AH-1Z, it is always a good bet to get the "High Ground" or altitude advantage of this vehicle. Try to strafe it and get around to its blinds spot, as it can't use the tail rotor effectively when moving, and will yaw and flip when making a strong attempt to turn-on-target. Always aim for the cockpit, as one the gunner is knocked out the turret becomes unusable. When coming up against a Zulu with gun pods or secondary weapons (especially the lethal AIM-9L), know that the pilot can still fire these even if the gunner is knocked out. However, it is unlikely that a Zulu will take a gun pod over a full missile rack. 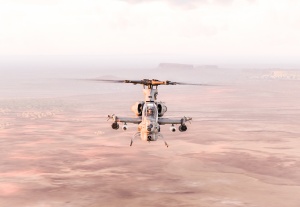 The AH-1Z is armed with:

The AH-1Z can be outfitted with the following ordnance: 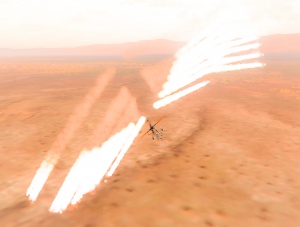 The AH-1Z only has the following Defensive systems installed:

When unlocked, flares are not installed - this requires the MAW module (tier I) to be researched and installed, this provides up to 120 Flares. The next module called AIM-9/MAW Provides two AIM-9L missiles, once installed on each wing tip along with the previous MAW system.

Using the AH-1Z Viper after the AH-1F requires learning time, the playstyle between this and the AH-1F has some unique differences such as ammunition, views and overall playstyle.

The AH-1Z is an attack helicopter, it does this role very well, in fact, it is one of the best attack helicopters in the game, with speed up to 411 km/h (255 mph). The AH-1Z offers a large array of ordnance selections, from miniguns and rockets, to Hellfire missiles. In addition, the AH-1Z can carry a combination of missiles, rockets or miniguns together. To optimise your loadout, pick a role to specialise, air protection or ground attack, though this attack helicopter can do it all.

To utilise the AH-1Z viper, make sure to adjust the tactics to the map, for example, on maps with rocks and hilly terrain, stay low and use cover whilst you get to into a position which will allow you to dominate the battlefield. For maps which are open and flat, climb to a high altitude and assess the situation, just make sure to scan the map and not get fixated on a location.

The AH-1Z has three main playstyles, the playstyles of this attack helicopter are focused around dominating in the following roles: medium & close range, long range, and air protection/support.

However, the AH-1Z does have one drawback, due to the increase in size changes to the centre of gravity in high pitch and tight turns, it is possible to lose control. It is advisable to always counteract by keeping the nose of the helicopter level or to lessen the turn radius. If required to do one, such as evading surface to air missiles, make sure that there is enough room to recover the helicopter in – ideally at least 1,000 feet and make sure to increase the pitch of the blades to a 100% to adjust for yawing.

The AH-1Z offers a combination of wing-mounted ordnance and ordnance packages which are available from Rocket pods, Machine guns, Hellfire missiles.

In an nonupgraded configuration it can carry up to 76 x Hydra-70 rockets or two pods with machine guns, but taking them to the battle will reduce the amount of Hydras to 38. Using these weapons will force you to get close to the ground units and make the helicopter vulnerable to turret-mounted anti-air weapons or SPAAGs, so it is recommended to stay at very low altitude and use the high level speed to evade fire.

Hydra rockets are not as reliable as long range AGMs, their accuracy is not great and in most cases even if the player manages to get close to the battlefield it will be able to destroy only a few units or disable their weapons and other components.

To utilise the long-range performance of the AH-1Z, hover outside of the combat zone. It is important that you check and make sure that there are no threats in the vicinity which could shoot you down. Once the combat zone has been declared safe from vehicles which could destroy you. Increase altitude, until you have a good visual on the objectives. Hover the helicopter, change the view to the gun camera and locate a target ground vehicle and fire! The Hellfire missiles offer up to 1,100 mm of penetration with a speed of 475 meters per second.

It is very important that after a few Hellfire missile launches that, you disengage the hover and relocate to another part of the battle zone. Performing this action will substantially reduce the chances of being shot down by enemy vehicles.

An AH-1Z Viper offers a unique set of capabilities compared to any other helicopter on the battlefield. It can be equipped with improved close-range Sidewinder air-to-air missiles. The Sidewinder missiles provide the capability to shoot down up to two enemy aircraft. They can shoot down other rotary-wing aircraft (helicopters) or fixed-wing aircraft (airplanes) provided an adequate missile-lock. The missiles can also be equipped with the additional payloads, such as Hellfires, machine gun pods and rocket pod configurations, providing a versatile offensive and defensive solution.

The AH-1Z can outmanoeuvre and outperform many of its rivals in air-to-air combat. The AH-1Z has a triple rotary M197 cannon with 750 rounds. Combined with a twin 7.62 mm M134 minigun, which also has 1,500 rounds per gun. That's a total of 3,750 rounds of ammunition. Not forgetting the wing-mounted AIM-9L Sidewinder missiles. This combination of impressive weapon systems can support extended air-to-air capabilities on the battle space.

To attack other helicopters with the Sidewinders, you will need a rear aspect shot – get a lock and fire one of the Sidewinder missiles! Bang the enemy aircraft explodes.

To attack using the cannon and miniguns, line up with the foe, come in fast and slow down – align your angle of attack with the side of the enemy, this will yield the best chance of success since the enemy unit has exposed the largest elements of the airframe to your firepower. Aim for the critical components such as cockpit, engine, fuel tanks and rear rotor elements. 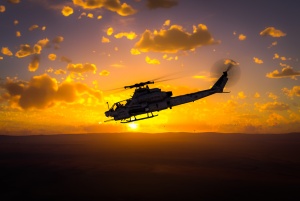 In 1996, the USMC launched the H-1 program in cooperation with the Bell company. The H-1 program was a plan to upgrade and modernize the Navy's existing fleets of AH-1 and UH-1 helicopters, in order to extend their service life and lower future operating costs. This was achieved by developing a new version of each helicopter model respectively. The new AH-1Z Viper, also known as "ZuluCobra", received upgraded avionics, fire control systems, engines and an improved four-blade rotor system, among other improvements. Furthermore, both the new Viper and UH-1Y were designed in a way to use mostly identical parts, achieving the desired reduction in operating costs and ease of maintenance as a result. The AH-1Z Viper conducted its maiden flight in December 2000, with three prototypes being built for testing in 2002. Small-scale production began in 2003 before the Viper was approved for full-scale production in November 2010. The USMC has ordered for 189 Vipers to be delivered to the fleet by 2021, with only a few dozen machines being in service today.