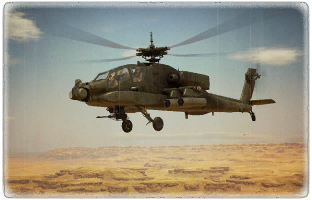 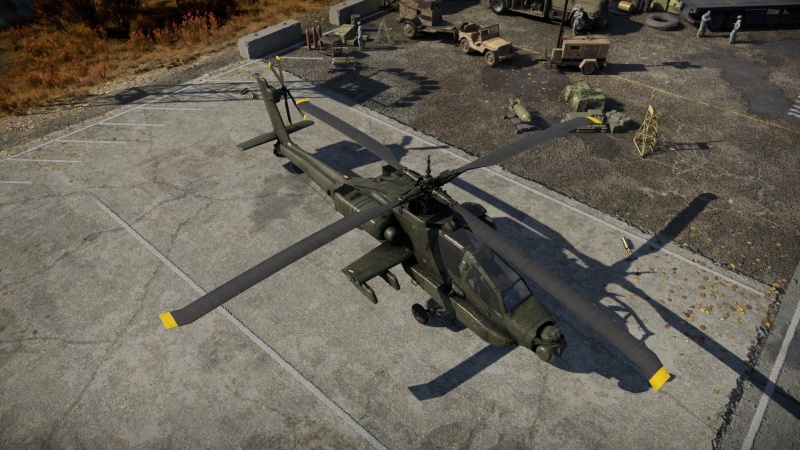 The AH-64A Apache is fitted with armour consisting only of bulletproof glass in the pilot's windscreen and Kevlar boron carbide in the crew seats and cockpit. This armour provides only limited protection, mostly just against low caliber weapons and fragmentation. It does not offer much protection against direct hits from guns larger than machine guns or against close detonations from fuzed anti-aircraft rounds.

The AH-64A can be outfitted with the following ordnance presets:

The AH-64A is an excellent helicopter for attacking ground targets, and can also hold its own against many enemy aircraft. Through adequate use of cover, teamwork, and game sense, the Apache can easily dismantle enemy teams. An Apache pilot must understand all of the tools at their disposal.

The Apache is surprisingly potent in air-to-air combat. Engagements should be conducted primarily through the use of the Stinger or AIM-9L missiles.

The Stinger is a simple but effective air-to-air missile. It has an excellent seeker head and can obtain all aspect lock on almost any air target within 3-5 km (even propeller aircraft with a low heat signature). However, the Stinger can be easily fooled by flares or outmanoeuvred by a fast enemy aircraft. The best way to use the Stinger against enemy aircraft is when they are heading directly towards you. If fired at the right second, most enemies will struggle to dodge a Stinger.

The AIM-9L is another great choice for shooting enemy aircraft. The AIM-9L is larger, faster, and more manoeuvrable. Additionally, the AIM-9L is more resistant to flares and countermeasures than the Stinger. The issue with this missile is the fact that it must be taken instead of other ordinances while the Stingers are carried on the side of the pylons.

Long Range Air-to-Ground (Hellfire): At longer ranges, the Hellfire missile can be used to full effect. The Hellfire will guide on its target as shown in the attached diagram. This is known as top attack. Being that it takes this path to the enemy target, the Hellfire can take upward of 30 seconds to reach its target at longer ranges. Do not fire at enemies that are about to move to cover, and make sure to fire multiple missiles at once in order to deal maximum damage. Because the Hellfire is laser guided, multiple missiles can be fired at once. They should be fired at intervals of 5-10 seconds, where between missiles the Apache can switch to a new ground target. This will allow for the quick destruction of multiple enemies. This tactic can be incredibly effective. Although the time to target for the most recently fired Hellfire is available on the HUD, pilots will have to keep track of all the missiles they have fired by memory and quick calculations.

The AH-64A Apache is the first variant of the famed AH-64 Apache attack helicopter. Designed by Hughes Aircraft, the AH-64 was built as a competitor in the US Army Advanced Attack Helicopter Competition, which it ultimately won. The Apache saw a variety of service in roles such as tank-killing and close air support, using a wide variety of munitions including Hellfire air-to-surface missiles and Hydra-70 unguided rockets. The AH-64A has been replaced by the AH-64D Apache Longbow, which benefits from improved combat capabilities.[1][2] 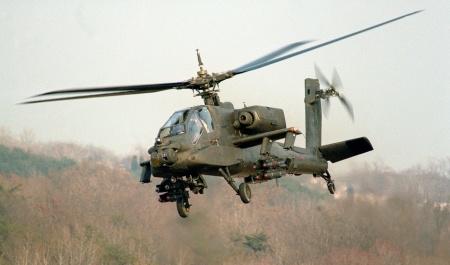 The AH-64 was first conceived of in the early 1970s as a durable, capable advanced attack helicopter to succeed the Bell AH-1 Cobra. The helicopter was designed for the Advanced Attack Helicopter competition, a United States army tender for a new helicopter. After reviewing proposals, the army decided to allow only two bidders; Hughes' YAH-64 and Bell's YAH-63.[1] The YAH-64 was selected as the winner, as it was deemed to be slightly more durable. As a result, the US Army decided to order pre-production models. However, the actual pre-production took much longer than expected. Though the YAH-64 prototype first flew in 1975 and received a production order in 1976,[1] the selection of weapons and avionics tenders took an additional six years. Nevertheless, the Army approved a full production contract in 1982.

The YAH-64 was equipped with a tandem cockpit for the crew of two, a gunner/co-pilot and the pilot. The helicopter is powered by a single General Electric turboshaft driving a four-bladed propeller, allowing speeds of up to 296 km/h.[1] The landing gear is mounted in a tail-dragger configuration and cannot be retracted. The helicopter is armed with a single 30 mm M230 chain gun, as well as wing hardpoints for various underwing ordnance options including Hellfire ATGMs and Hydra-70 rockets.[1]

The AH-64A began entering service in 1982, following the completion of the Advanced Attack Helicopter program. Full-scale production was started by 1983.[2] The helicopter went on to serve in a variety of conflicts, and distinguished itself as a highly capable ground attacker and air support vehicle. The Apache participated in both Operation Restore Hope and Desert Storm, as well as the 1989 action in Panama, where its advanced sensor capabilities proved to be valuable in night-time raids.[2] During Operation Desert Storm, Apache helicopters were responsible for destroying over 500 enemy armoured vehicles; they performed just as well during the liberation of Kuwait, destroying 245 enemy vehicles without any losses.[2]

The Apache was later fielded in the Middle East as well as in Bosnia, where it enjoyed continuous success. As well, it has been exported to many international customers, including Egypt, Greece, Israel, Saudi Arabia and the United Arab Emirates.[2] In total, McDonnell Douglas, who purchased Hughes Aircraft in 1984, delivered 937 AH-64A model Apaches: 821 to the United States, and 116 to international customers.[2]

In the 1990s, the AH-64D Apache Longbow began to enter service. It was designed as an advanced version of the Apache, carrying a prolific over-the-rotor fire control radar and the ability to mount fire-and-forget Hellfire Longbow missiles. As a result, almost all Apache-operating nations have converted their existing AH-64 helicopters to the AH-64D standard. The United States started converting their AH-64A Apaches starting from 1998, and all conversions were completed by 2008.[2] As a result, the AH-64A variant is now in limited service with foreign nations, and has been superseded by the more advanced AH-64D variant.[1]