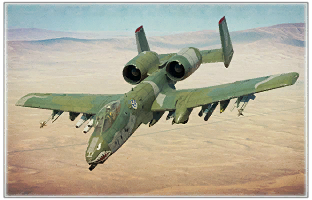 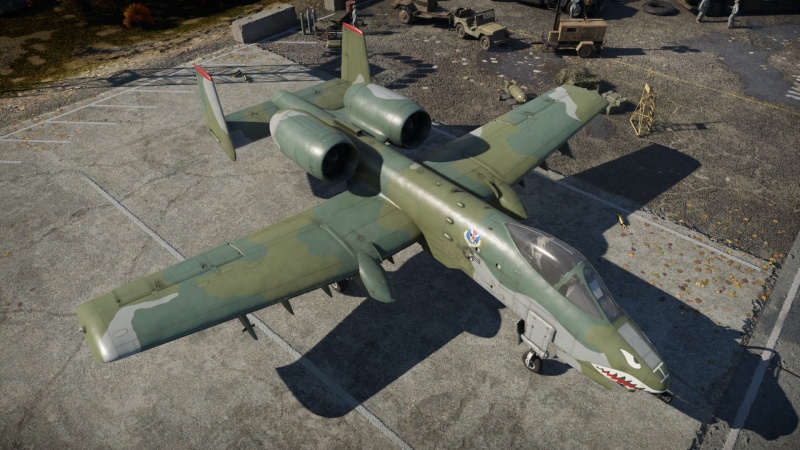 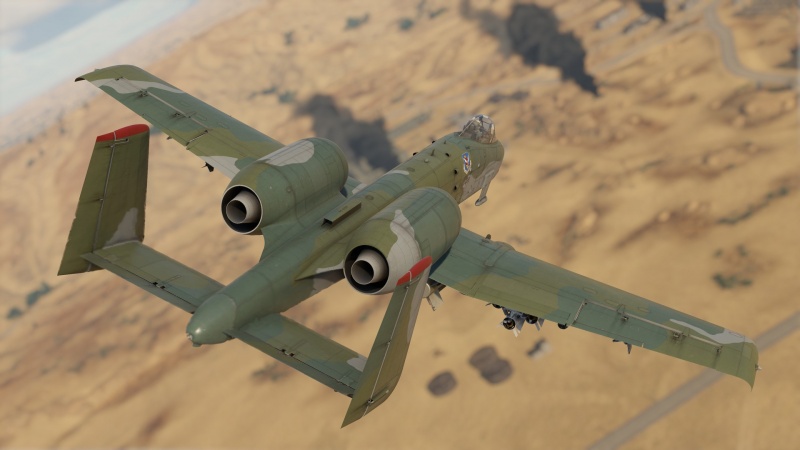 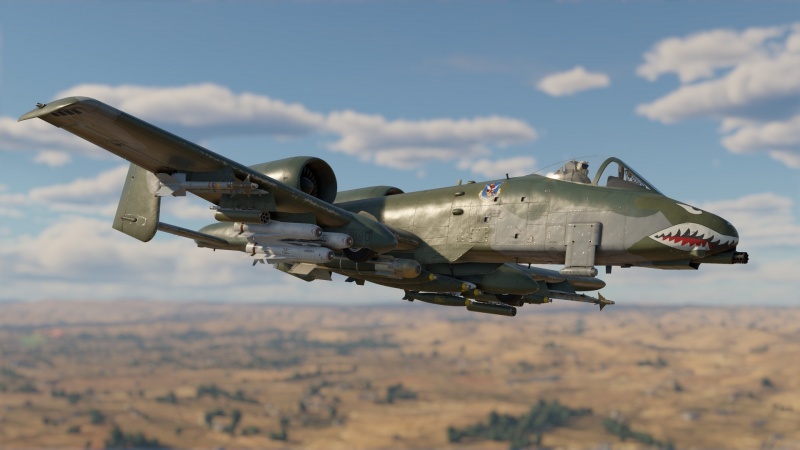 The A-10A Thunderbolt II (Early) is a premium gift rank VI American strike aircraft with a battle rating of 9.7 (AB/SB) and 10.0 (RB). It was introduced in Update "Wind of Change".

The A-10A is a very slow plane at its BR but it retains good manoeuvrability, even when carrying a large payload. 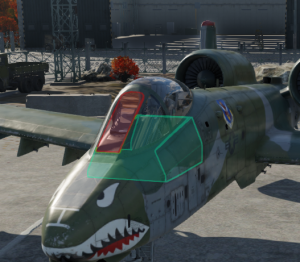 Armour layout of the A-10A

The cockpit is where all of the extra armour plating is located, making the pilot have a high likelihood of surviving while leaving the fuel tanks, wings and engines without any armour. The armour is most effective against autocannons with the calibre of 25 mm or lower.

The A-10A can be outfitted with the following ordnance presets:

The A-10A is extremely effective in ground battles as long as it is used the right way. There are two methods for ground attack, and the tactic used is dictated by the type of threats on the ground. A low-risk situation is when there are no enemy SPAAs or fighters. When performing an attack run, start at a higher altitude, drop ordnance and fire the Avenger then escape for another attack run. In a high-risk environment, where there are enemy SPAAs, stay low and (relatively) fast. This allows pilots to stay below SPAA radar and lines of fire. When attacking, use intel from friendly ground forces to make precision strikes, then retreat after a single pass. After one pass, enemy SPAAs will know that there is an A-10, and be more alert. When trying to escape enemy fire after an attack run, preemptively dump chaff and flares in groups of at least four, and bank hard left and right until out of immediate range. AGM-65A Maverick AGMs are effective from up to 8 km, but from that distance any locked enemy has time to move behind cover before the missile impacts. When firing Mavericks, attempt to target enemy SPAAs that have not left spawn before targeting enemy MBTs. You can then use the ballistic computer for the GAU-8 and fire at any ground target. Because of the GAU-8's high penetration and extremely high rate of fire, the rounds will manage to go through any tank, even the heaviest armoured MBTs. Remember that even though the A-10 is a ground attack fighter, it is still equipped with AIM-9L AAMs. The A-10 has a good turn rate so, if attacked, swing around and fire a missile. However, you do not want any enemy aircraft to get the first shot on you, so keep an eye out for enemy aircraft.

In air battles, the A-10A is way less potent but still decent. It has two all-aspect AIM-9Ls which can pull 30G, at this BR this is almost two guaranteed kills. However, it struggles because of its very low top speed: any jet can easily outrun it. You can score some kills with the GAU-8 cannon but you are outclassed at that BR because of its poor flight performance in air-to-air combat.

After WWII, American aircraft designers shifted focus toward developing tactical aircraft capable of delivering nuclear weapons while conventional strike aircraft fell out of favor with the new American military doctrine. By the start of the Vietnam War however, the A-1 Skyraider, being the most widely used strike aircraft in U.S. service at the time, was considered vastly outdated. Furthermore, new aircraft such as the very successful F-4 Phantom II proved to be too expensive for strike mission operations.

As a result, in September 1966 the USAF ordered the development and procurement of a dedicated new close air support aircraft, resulting in the A-X program being launched shortly afterwards. In May 1970, the first requirements were issued, including the need to design the aircraft around a new 30 mm rotary cannon. Of six aircraft manufacturers who submitted design proposals, the two from Northrop and Fairchild Republic were chosen for further development, resulting in two prototypes: the YA-9A and YA-10A, respectively. After intensive testing of both prototypes, the YA-10A was declared the winning design and was ordered into production in January 1973.

After the USAF received its first production version of the A-10 in November 1975, the aircraft received its official name "Thunderbolt II" in April 1978 in honour of the WWII-era P-47 fighter-bomber also built by Republic. Although the A-10 was first assigned to a military unit in March 1976, its first combat use would be in 1991 as part of the Gulf War. During this conflict, the A-10 underwent its baptism by fire and successfully proved its design, racking up an impressive number of enemy targets destroyed. A-10s were also employed during the Balkan conflicts of the mid and late 1990s as well as during the Invasion of Afghanistan and Iraq in the early 2000s. The A-10 Thunderbolt II, despite its age, still forms the backbone of the USAF's close air support force to this date, with over 700 units of the A-10 being produced in total.