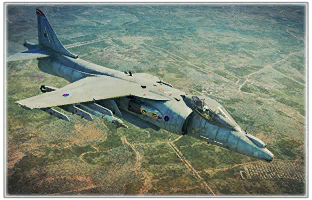 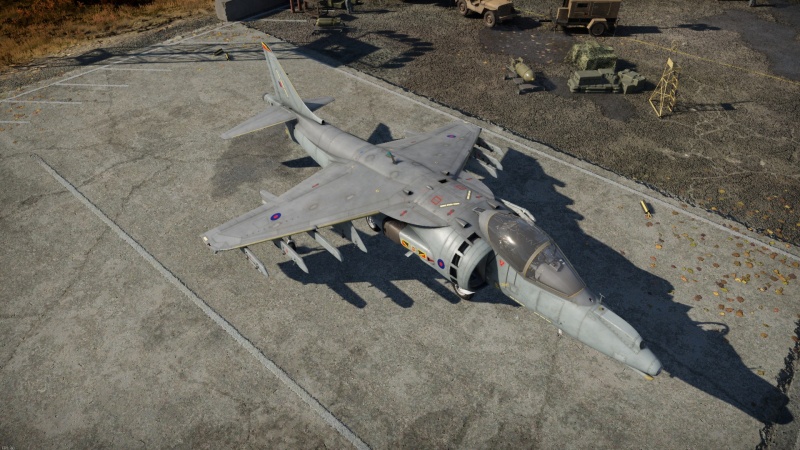 The Harrier GR.7 is a rank VII British strike aircraft with a battle rating of 11.0 (AB/RB/SB). It was introduced in Update "Drone Age".

The Harrier GR.7 is armed with:

The Harrier GR.7 can be outfitted with the following ordnance presets:

The Harrier is a subsonic fighter fighting against a mostly supersonic opposition. However, as a weapons platform, it has access to some features that make it able to compete:

You can carry up to 4 AIM-9L missiles that are all-aspect, have an maximum overload of 30 G, and a maximum launch range of 18 km. In realistic terms, that means that if you have an altitude advantage of 1-2 km to someone running away from you you are still able to lock them and fire at a distance of up to 5-6 km and the missile still has a good chance of reaching them. The AIM-9Ls have a decent flare resistance if the enemy still has his afterburner on. However, you should avoid firing them in a frontal aspect as just a few flares will be able to decoy them.

You will receive access to 60 countermeasures with the first countermeasure modification and with the second you unlock the option to carry 160 countermeasures on each of the Sidewinder pylons, totalling to 4 X 160 + 60 = 700 countermeasures. It is highly recommend to run them mixed (both flares and chaff). This allows you to use the periodic countermeasures dispense function when you are in situations where your situational awareness will be limited, to prevent a missile kill.

You also receive a RWR, which is a useful tool for roughly finding the location of enemies and warning you when you are locked on radar.

At the beginning of the match you can climb to the side along the same flight path as the rest of your team. Try keeping a speed of above 800 km/h while climbing to maybe 5,000 to 7,000 m altitude. That playstyle would leave you however open to some BVR misses being fired by enemies like the F-14. If you pick up a warning on your RWR and see a semi-active or active radar-guided missile you will want to fly perpendicularly to the source of the enemy radar whilst deploying chaff.

The general playstyle would be to wait for the proper opportunity. You are not the plane that will carry the match, you are a support aircraft. Almost all matches inevitably turn into a furball fight where enemies and allies will be located in a tight area. You can dive down from above on them and fire your AIM-9Ls on unsuspecting targets. Be careful not to fire your missiles when allies are very close to the enemy, as you can easily kill a teammate by mistake.

When surrounded by enemies, turn on automatic countermeasure dispenser and focus on the enemies position and who you can target and to where you can disengage. Try to avoid turning with enemies as even with the VTOL controls you will probably be outmatched. A turnfight should be your last resort.