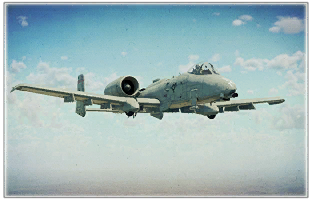 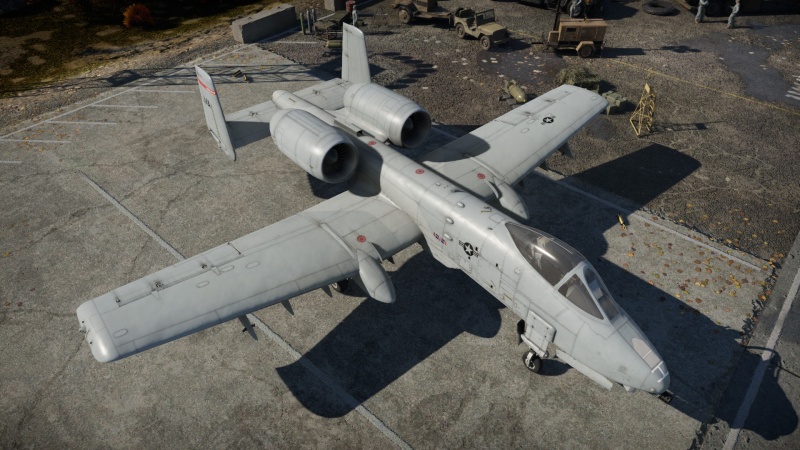 The A-10A Thunderbolt II (Late) is a rank VII American strike aircraft with a battle rating of 9.7 (AB/SB) and 10.3 (RB). It was introduced in Update "Wind of Change".

The single biggest downside with the A-10 is its top speed. At 642 km/h at sea level, the A-10A is the slowest aircraft at its BR. Not enough emphasis can be put on how much of a disadvantage the A-10's speed is, especially at a battle rating of 10.0, where apart from another A-10, every single aircraft it faces will have at least a 400 km/h faster top speed.

Despite how crippling the A-10's speed is, there are a handful of advantages to being so slow. First, while it is slow, it still is manoeuvrable at those low speeds, even with a heavy weapon loadout. It also means that its turn time is tight and quick compared to supersonic aircraft.

The A-10A has substantial armour around the cockpit, fuel tanks, and transmission. This armour effectively protects the pilot from machine gun fire and autocannons up to 25mm. However, while the pilot has ample armour protection, the other parts of the plane, such as the wing, tail and especially the unarmoured and exposed engines, will easily be destroyed by any short cannon burst, so do not expect to tank such attacks.

The A-10A is equipped with a whopping 480 countermeasures. This gives an extended and effective protection against even the most potent heat-seeking missiles it will face. A good strategy is to turn on periodic countermeasures upon entering a battle. The constant flares will make you practically immune to IR guided missiles, and since the A-10A has so many countermeasures, you won’t have to worry about running out as you will probably still be left with a large amount provided you survive.

The A-10A Late can be outfitted with the following ordnance:

The A-10A Late is specifically designed to attack ground targets. The AGM-65Ds and Mk 84s provide substantial firepower against armoured ground units. When within range, the 30 mm GAU-8 cannon can be used: the gun may lack penetration power against armour, but is excellent at destroying exterior modules and inflicting damage by overpressure.

The A-10's low speed makes it difficult to reach enemy ground units and bases without being intercepted, and also makes the A-10 especially vulnerable to both attacking aircraft and SAMs. Another problem with being so slow is that it is very easy to get energy trapped. This means that any common enemy aircraft can simply fly above the A-10, and with its slow speed, it simply has no chance to follow and get in range to use its gun. After the A-10 inevitably pitches back down (or stalls), the enemy aircraft will dive down on the slow and vulnerable A-10. While the A-10 can utilize its all-aspect AIM-9Ls to potentially dispatch aircraft lacking flares before they can initiate an energy trap, skilled players can easily dodge the AIM-9L without flares, while flare-equipped aircraft (which can easily flare an AIM-9L) should never be engaged unless absolutely necessary as it will likely result in the A-10's destruction. The slow speed also disadvantages the A-10 in high-speed head-ons. While it does arguably have the most powerful gun in the game, the A-10 will have trouble dodging the rounds of an enemy aircraft because its low speed prevents it from quickly getting out of the way. Meanwhile, the enemy aircraft, which is likely going much faster than the A-10, won't have too much of a problem dodging the A-10's rounds provided they begin evading at an ample range.

However, its slow speed and great maneuverability allows the A-10 much more time to aim its weapons at ground targets than if it were, say, a supersonic aircraft which is unmanoeuvrable at low speeds. Due to this, the A-10 can farm ground targets much quicker than most other planes; with its 1,174 rounds of 30 mm, a single A-10 left unchecked to freely attack ground targets can reduce an enemy team's ticket count by half or more. As stated before, the A-10 has very little chance in a vertical dogfight. However, the A-10's slow speed and good low speed manoeuvrability gives it the advantage in a horizontal scissors dogfight, as the likely faster enemy aircraft will quickly pass in front of the A-10's devastating gun. In a prolonged horizontal low speed scissors dogfight, the enemy aircraft would have likely bled much of their speed, again giving the A-10 an advantage with its good low speed manoeuvrability. If the enemy attempts to run away, the A-10 can exploit their low speed to launch an AIM-9L. When flying the A-10, if you notice an attacking aircraft may be unaware of the A-10's speed weakness (or unaware of how to exploit it), attempt to force it into a horizontal turn fight or scissors where you will have the advantage.

The A-10A Late can equip up to four AIM-9L air-to-air missiles for self-defense. These missiles have long range, high manoeuvrability (30G maximum overload), and all-aspect ability (can be launched from all sides including the front). However, there are a few significant drawbacks. The AIM-9Ls have a low track rate, meaning that while the missile has great manoeuvrability, it takes a long time to deflect its control surfaces and actually reach that manoeuvrability. This is a big problem noticeable in a couple situations. First, when the missile is initially launched, the AIM-9L travels basically straight for a moment before taking some time to get to speed and manoeuvrability. This means that it has trouble making high-aspect close range launches, especially in a head-on where the enemy's high approach rate gives the AIM-9L little time to manoeuvre. Second, it struggles to follow targets in multi-axis high-G manoeuvres (such as rolling and pitching aggressively at the same time and alternating directions). The next big problem is its tendency to overlead targets traveling at high speed. What this means is that it will turn towards the target, lead too far as if the enemy was traveling faster than they actually are, and at the last moment it will attempt to turn back in towards the enemy to correct itself, which usually causes the missile to miss. Finally, the AIM-9L is very sensitive, consistently and easily going after not only flares but also other missiles.

All these drawbacks make the AIM-9L quite an unreliable missile, and those familiar with the other high-tier Sidewinder variants (such as the AIM-9G/H and AIM-9J/P) will quickly notice the AIM-9L missing shots that those other sidewinder variants would easily have made. However, these drawbacks absolutely do not make the AIM-9L a useless missile, as they can be extremely deadly when used correctly. Despite having a poor track rate, it still has high manoeuvrability, meaning that if an enemy tries to dodge the missile by simply turning hard in just one direction (which happens fairly commonly), the missile will reach its maximum manoeuvrability and likely destroy them. Its long range and all-aspect capability means that it can catch unaware enemies off guard. Launching from below is a good way to do this, and enemies tend to not properly dodge the missile in head-ons. Despite its unreliability, if an enemy isn't going fast, the AIM-9L will easily strike them from even long ranges. Finally, at its BR, the A-10A Late and its AIM-9Ls commonly encounter aircraft without flares, making those aircraft especially vulnerable in these situations. In conclusion, you shouldn't expect the AIM-9L to reliably kill enemies, but if used properly, they can be used effectively in a support role.