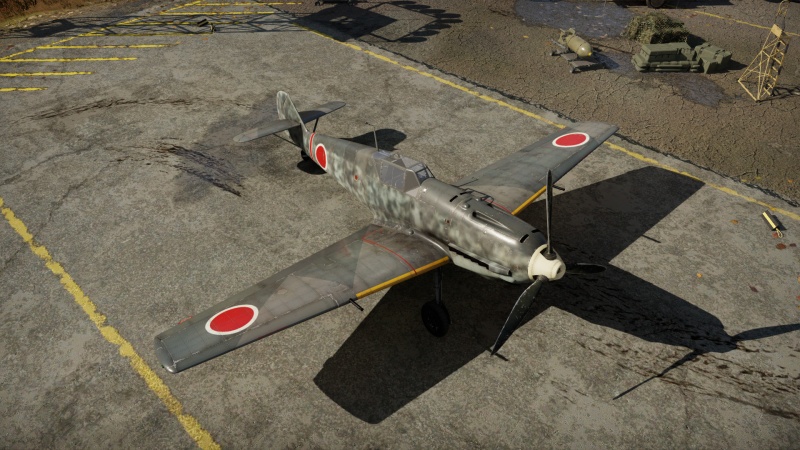 Unlike its Emil variant predecessors, the Bf 109 E-7 has improved its flying characteristics, while packing the MG FF/M at its wings for maximum damage output. Respectable rate of climb and energy retention due its power-to-weight ratio allow the Bf 109 E-7 to perform BnZ tactics, however due to the limited ammo of the MG FF/M cannons, this role may be better left to more suitable aircraft, such as the Fw 190s. Instead, Bf 109 E-7 excels at energy fighting, capable of bleeding opponents of energy and quickly striking them down. Bf 109 E-7 has good manoeuvrability, and combined with strong flaps can deal with anyone trying to dogfight you. The Air targets belt for your MG FF/M is undoubtedly effective for most aircraft, while universal ammo for your MG 17 provides AI and AP-I rounds which are capable of setting aflame vital part of your opponents.

Remember, altitude is everything, so make sure you are above your opponents. Thankfully the engine provides excellent speed and energy retention which makes climbing even higher without losing much speed easy. Once you are at altitude and found your opponents, analyze the situation and pick the right target to deal with. However if someone is above or has same altitude with you, don't attempt to head-on as your MG 17 cannot do much damage while the MG FF/M is less accurate at longer ranges. Instead, evade any shots from them by doing a barrel roll. If they try to turn vertically, you can turn in aggressively and attempt to shoot them down. After any engagement, regain your altitude ASAP. You don't want the opponent above your plane and destroy you without letting you to counter-attack. Be careful not to dive towards your opponents too steeply (600+ km/h), or you will crash without getting kill at all.

The 2,000 rounds in the pair of MG 17 are sufficient for sustaining battles, but the amount of MG FF/M rounds is a different story. Its cannon still utilizes the 60-round drum magazine, and its accuracy is mediocre at best. Once again, picking the right target can prevent you from burning through the cannon ammo in no time. Adjust your gun convergence to 250-400 m to maximize the effectiveness of MG FF/Ms. Refrain from attempting to catch bombers as the armament is not strong enough to reliably down them quickly, and also could get you killed from its defensive gunners. If your cannon has run out, the pair of MG 17 is still capable doing its job despite its low damage output. Most important of all: don't destroy ground targets as you don't have any kind of ordnance and save your ammo for your actual role: killing fighters.

Overall, Bf 109 E-7 is fun to play, combining a stable platform, power-to-weight ratio, improved overall performance, and devastating armament. However, trigger discipline is mandatory as cannon ammo amount is limited. As long as you have enough energy in your Bf 109 E-7, this plane can overcome anything without worrying about being overtiered as this plane provide stable performance characteristics.

In 1941, a Bf 109E prototype fighter was sold to Japan as a part of the German-Japanese military technical cooperation.

The aircraft was delivered to the Land of the Rising Sun without armament for flight tests. Japanese Hinomaru markings and a tail number of "1" were applied to the fighter, and then the machine underwent a complete cycle of flight tests at the Kawasaki Company's factory airfield. Comparative tests of the Bf 109E were also performed, with Japanese army fighters involved, such as the Nakajima Ki-43 Type 1 Hayabusa, the Nakajima Ki-44 Type 2 Shoki, and the Kawasaki Ki-61 Type 3 Hien prototype. The aircraft was piloted not only by the Japanese but also by a German test pilot named Willy Stor.

The Japanese were most of all interested in the Messerschmitt's DB 601 engine, whose licensed production was being mastered by the Japanese industry at the same time and which was to be mounted on the Ki-61 Hien, the newest fighter being developed in Japan. That is why the Bf 109E itself, as well as any prospects of its licensed manufacture, aroused minimal interest among Japanese specialists. 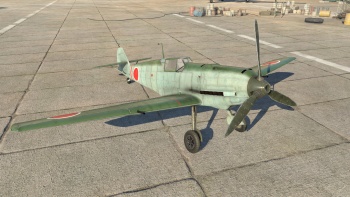