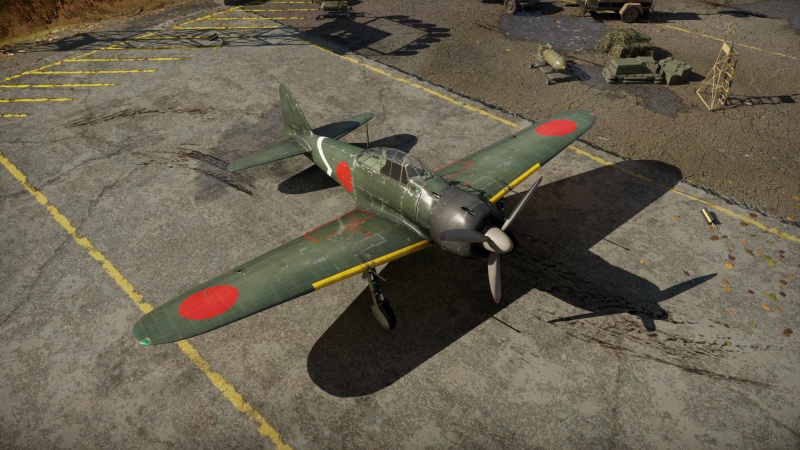 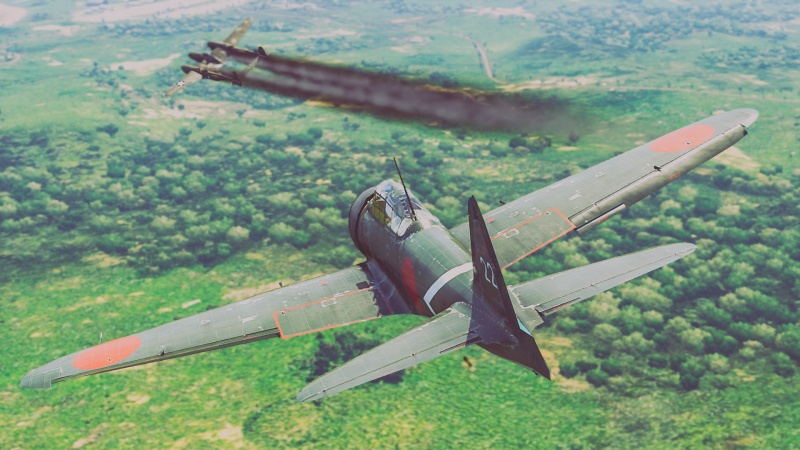 With this plane you get two 7.7 mm Type 97 guns and two 20 mm Type 99 Model 2 cannons. The 20 mm cannons do not hold a great deal of ammunition, so extra care should be taken when firing to ensure that no round is wasted. Stealth belts are recommended for both weapons, as they contain a decent proportion of high-explosive rounds, and maintain an element of surprise.

The A6M3 mod. 22Ko can be outfitted with the following ordnance:

The only suspended armament you get with this plane is two 60 kg bombs with a explosive mass of 23 kg and a penetration of 78 mm.

The Zero is a extremely effective dogfighter with a very tight turn. Head on engagements should not be taken with any plane, especially Americans such as the F6F and the P51, as the Zero is very fragile. Any hit can be lethal. The engine is very weak and fuel tanks can easily catch ablaze. At the start of the match, try climbing to be able to dive on unaware opponents. The plane can exceed 700 km/h allowing it to commit to very steep or long dives with slight stiffening. The biggest threats to the plane are American planes due to their potent and numerous guns, but any plane can be taken in a turn-fight victoriously.

In offence, aim to begin turn-fights with your opponents as you will outclass them, but take very careful shots. The guns are the weakest aspect of the plane and must be used with precision. Always aim for the fuel tanks or pilot as those are the most effective ways to take down enemy aircraft. Make sure to tail burning aircraft loosely as most fuel tanks are self-sealing. Bomber and other heavier planes should not be taken on as the guns are very ineffective. Only careful pilot snipes should be taken, otherwise conserve ammo for future engagements.

To defend yourself from the rear, perform a split S, which consists of rolling and turning downwards in the opposite direction, and turn to the enemy to begin engaging them. Planes will quickly overshoot and will have difficulty regaining dominance. If caught in a head-on situation, roll and dive downwards towards the enemy, make sure to have no commitment.