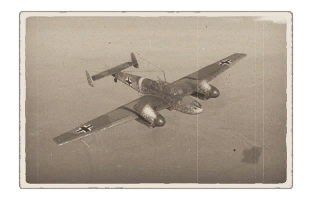 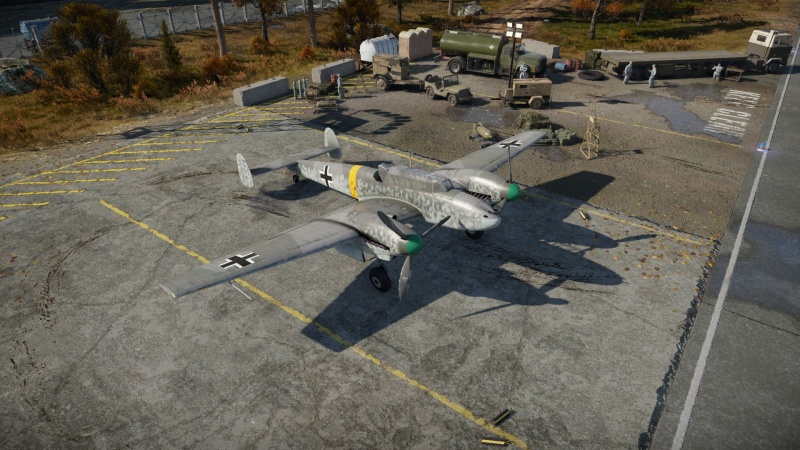 The Bf 110 is heavy and therefore sluggish at low speed. Once it has reached a good speed (350+ km/h), it gains in manoeuvrability and becomes a very capable bomber hunter.

The Bf 110 F-2 can be outfitted with the following ordnance:

The Bf 110 is an aircraft that can fulfil many roles in War Thunder. Experiment with strategies to make one that best suits your playing style. Below are some of the most common roles a Bf 110 can fulfill.

The decent climb rate for the Bf 110 guarantees you'll be able to climb high enough to intercept bombers. Along with the nose mounted heavy armament and excellent survivability, it is a bomber's worst nightmare.

With access to a wide variety of bomb loads and decent enough elevator authority, the Bf 110 can change the tide of a battle. Machine guns from tanks will do little harm to the heavy fighter but this does not mean you are invulnerable from threats from the ground. Your plane is a very big target for SPAA and they can make short work of the fuselage.

In tank RB, the Bf 110 F2 is a fantastic multipurpose plane, being able to carry various bombs, additional guns, rockets or nothing, allowing it to perform both ground pounding and air superiority fighting. For ground pounding, the most recommended setup is 2 x 500 kg bombs with at least 1.5 second fuse. They are loaded on the fuselage and drop one by one, meaning that with accurate aiming, you can consistently get around 2 enemy targets easily. Dive at a target at no more than 45° (its elevator cannot effectively pitch the plane up in time, resulting in a crash. You must have seen lots of Bf 110s crashing) and gather speed up around 500 km/h (if too fast, cut throttle). Zoom in on the target and when it is twice as big as the mouse cursor, place the target between the cursor and the cockpit, and release the bomb. For the 1 x 250 kg + 1 x 1,000 kg setup, the aiming is similar, but place the target closer to the cursor for the 250 kg, and for the 1,000 kg, closer to the cockpit. Once all bombs are out, zoom climb towards your airfield to gain altitude advantage (the average air spawn altitude seems to be around 1,000 m) and keep and eye on the enemy air spawn. Once an enemy plane spawns, you must decide if it is single-engined or twin-engined as fast as possible. You can force a head on, as your nose-mounted cannons are decently effective at this. If the opponent is single-engined, avoid turning too much and remain your speed. If necessary, use your tail gun and put a stray of 7.92 mm bullets into it, but remember to use "Armoured targets" belt to compensate for the small calibre. You can also target ground units, especially lightly armoured SPAAs, light tanks, or SPGs.

Yak-2 KABB: Do not think that the Bf 110 F-2 can confidently out manoeuvre this plane just because it is twin-engined. The Yak-2 has an amazing turn rate for a heavy fighter, thus the Bf 110 F-2 must avoid turning with it, if not dogfighting with it in general. It bears a pair of ShVAK cannons that can easily damage vital parts like engine or cooling systems. It has green camouflage, greatly resembling an Me 410 but with an H-tail just like the Bf 110s.

ZSD63: Though it is hard to identify specific SPAA vehicles on the ground (especially when they are shooting tracers at the plane), if a ZSD63 is identified, avoid it at all costs and do not attempt head-ons with it, ever. It can easily snap a wing off by causally putting a short burst in the Bf 110 F-2's flight path. Don't even get close to it unless the Bf 110 F-2 is equipped with a bomb that it can use. Even ground target belts on your cannons cannot effectively damage it as its hull is overall quite empty, causing your shells to do little to no damage. Some identifying features of the ZSD63 is its rather boxy and tall hull with a geometric turret sitting at the back, slightly similar to a Wirbelwind. The firing manner is also distinctive: the sound and green tracers are very rapid, much like a buzz saw, but then it will remain silent for half a minute reloading. Note that an experienced ZSD player will hold its fire or shoot in single salvoes with long halts between, making it look like that it's reloading.