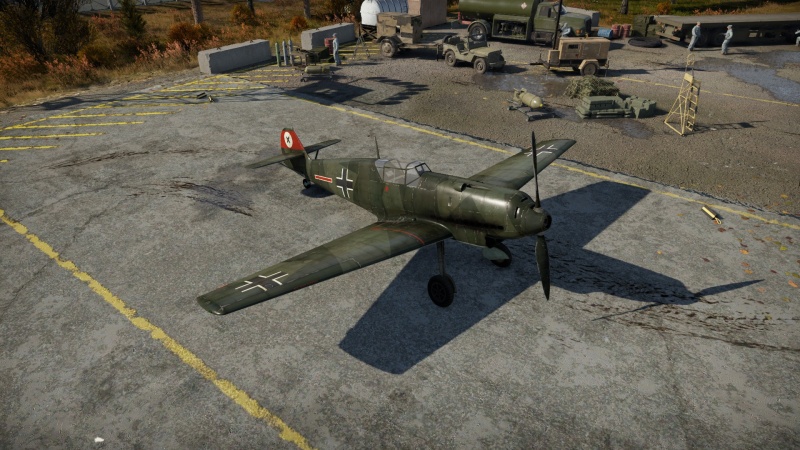 Despite having no armour protection or self-sealing fuel tanks, this aircraft can surprisingly survive inflicted damage. The first part of the aircraft that you will most likely lose is the engine. The engine is great for soaking up incoming rounds especially from head-on attacks or gunners on bombers. When fighting biplanes and other early tier aircraft, their bullets are not very effective unless they are close enough or aimed to target the vital components. Luckily, a majority of early tier pilots are just starting out and may not be good at aiming. Coupled with good evasive manoeuvres this aircraft can survive long enough to escape low-powered planes: saving your life.

Against bombers, the Bf 109 B-1 performs poorly. When engaging, aim for the engine or pilot. Due to its bigger hit box, the engine is the preferable of the two. This could cause an engine/fuel tank fire, making the task all the easier. Remember that propellers often take some time to stop spinning, so don't be misled into firing all you have into a single engine, a few good bursts will do the trick just nicely. Alternate to the other engines once you feel like the previous one had enough. Picking of the gunners might also allow you to stay behind the bomber, littering a certain area/ engine. However, this calls for some good shots and a loss of valuable time if you don't get them in your initial pass.

The Bf 109 B-1 is a strong performer in RB. It doesn't have the absolutely stellar climb of later 109s, but gets up to altitude easily enough. Its biggest asset is its incredible high speed turn, which can comfortably cut inside of other planes' turning circles, especially in a high speed engagement. If you drag on the fight for too long though, you will lose your advantage. However, due to mainly fighting biplanes and other early monoplanes, you can use your speed to reset the engagement in your favour. The biggest drawback of this plane is the armament - it will take a lot of time on target to down or critically damage an enemy. Like other 109s, the roll rate is subpar and requires use of the rudder to be put to its full potential.

In Simulator, the Bf 109 B-1 is quite a friendly fighter that fights well. It offers great flight performance with its smooth handling, adequate speed against biplanes, and impressive climb rate and turn rate. Its nose-mounted MGs have lots of ammo and do not require any convergence setting, making it very easy to aim. The nose gently slopes down from the windscreen, offering great over-the-nose vision. Despite having a razorback, the B model actually has great visibility towards the tail, increasing the pilot's situational awareness. Finally, the engine is not as powerful as the later models, making takeoff easier. However the B model does suffer from poor firepower given by the mere 2 x 7.92 mm MGs. Shooting windows in SB are way smaller than in RB, which reduces its effectiveness even more.

The Bf 109 B-1 came out of the prototype V series of the Bf 109s and saw combat in the Spanish Civil War. While the Bf 109s faced various performance and reliability issues from their engine to an obvious lack of "punch", the experience proved to yield valuable data allowing for design improvement, ensuring the success of later Bf 109 models.

While the B-1 was the only production model of the 109 carrying the "Bertha" designation, later models that saw improvements to the variable pitch carried the unofficial designation of B-2.

A notable feature of the Bf 109 B-1 is its massive opening in the cowling. While production models carried a third MG 17 firing out of said cowling, this was nearly always removed after combat trials during the Spanish Civil War. Although the fixed gun was cooled by the air coming in through the hole, it proved unreliable and a detriment to the plane. The in-game Bf 109 B-1 does not have this MG 17.