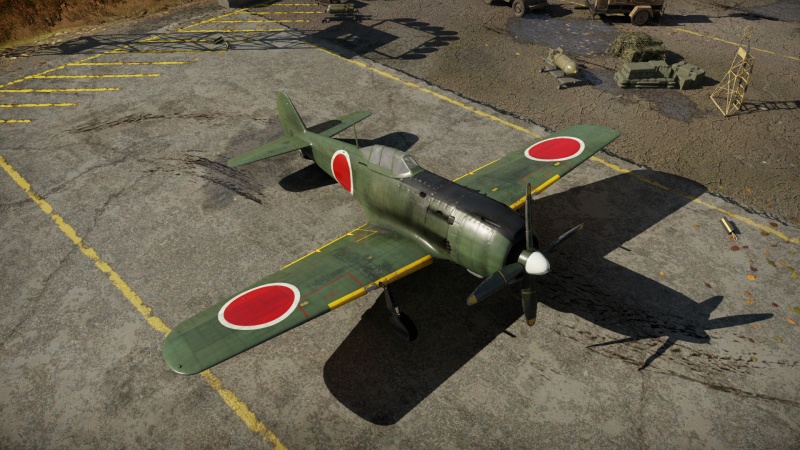 The Ki-84 ko is a very good multi-purpose fighter, its capable of energy fighting and sustained dog fighting making it a menace to face with few enemies matching it, it takes a rather skilled pilot to shake these off as they have great turn fighting capabilities, good climb rate and a decent top speed for their BR.

It is important to remember that when uptiered, you will be fighting aircraft such as the Spitfire F Mk 22, which is faster both in a straight line and in a shallow or step dive, the best way to reliable deal with this threat is to coax your enemy into a rolling scissors or sustained dog fight as the Spitfire F Mk 22 does not have a faster turn rate than the Ki-84 ko, alternatively if they do not dog fight and they are above you, you can force an over-shoot with some defensive flying and catch the Spitfire either as it passes or when it starts to go back up into its climb thanks to the Ki-84 ko's good climb rate.

The Ki-84 ko is not very well armoured at all and should avoid any head on engagements or well defended aircraft such as B-24s as it is rather fragile to enemy fire. The weaponry isn't spectacular either and may require a bit of practice as they are rather lacklustre compared to other planes you will fight.

As a Ki-84 pilot your safest bet is to climb above your opponents and pick and choose your battles, often a good strategy to use is to hunt down the highest altitude enemies and pick them off one by one, remember not to waste all the altitude you have obtained as altitude is your friend in the Ki-84, whether you prefer Boom and Zoom or Dogfighting, the Ki-84 ko is sure to please you.

Before taking off, bring at least 30 minutes of fuel for longer patrol time. Set the convergence to around 250 m since your weapons have low velocity, therefore needing more precise aim at longer range. While your Ki-84 roars down the runway, you will notice that it shifts severely to the left, thus you must put rudder input to the right to taxi straight. As with other Ki series aircraft, only elevator trim is available, so when the stick is at its deadzone, the Ki-84 will roll and yaw to the left side. Therefore you always need to pull the stick a little to the right which can get a bit annoying. Usually, trim for around -1% when cruising around 470 km/h, around -5% when diving around 600 km/h, and when fighting at around 400 km/h no negative trim is needed. When carrying the 2x 250kg bombload, no negative trim is needed as well. Landing characteristics are forgiving: cut throttle to make sure you are not above 350 km/h before touchdown. Deploy combat then takeoff flaps to further decelerate in preparation for extending landing gears. Extend at around 260 km/h, control your descend rate throughout. Right before touchdown, deploy landing flaps. The gears are quite sturdy. You can break until the plane reaches full stop and not worry about propeller strike.