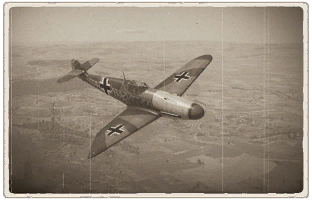 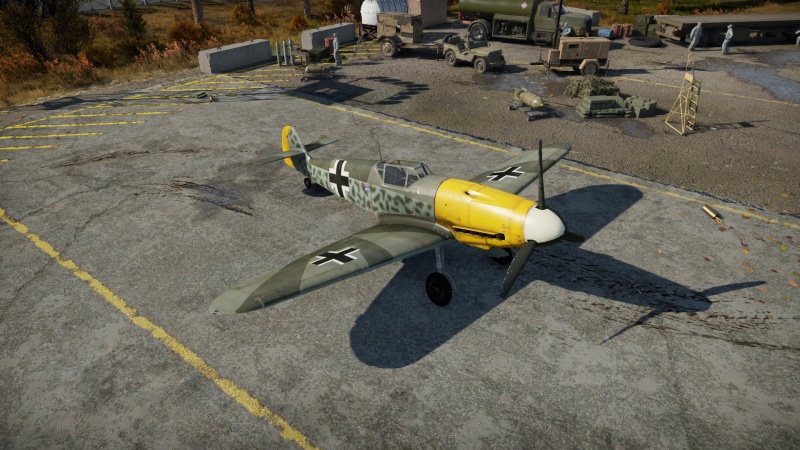 Having picked up their Bf 109 trade in the earlier Bf 109 B-1 and the Emil series, the player will be presented with the Bf 109 F-1. Even though it's not the definitive version of the Friedrich, the F-1 is still a good starter plane for the series. If the player has done their best to understand how to handle the 109 during their time with the B-1 and Emils, they will rejoice at the performance of the F-1. Likewise, if the player has not gone through the trouble of learning the ins and outs of the Bf 109s with the earlier models, they will slowly realize the error of their ways when flying the Friedrichs.

The F-1 is the perfect starting point for the Friedrich line. The most notable change of the Friedrich over the Emil is its performance. Having a more aerodynamically efficient design, especially in the nose, the plane is propelled forward by a powerful DB 601 N producing up to 1175 hp. Reaching speeds up to 615 km/h at 5.2 km altitude, the Friedrich is testimony to the trademark acceleration and speed found in the Bf 109s. A powerful climber, the F-1 quickly reaches altitude and can easily out climb most of its historic counterparts. As with all Bf 109s, the optimal climbing speed is 270 km/h (IAS). As such, the Bf 109 F-1 should largely be played like the Emils, with the bonus of additional performance making the flying and fighting even easier. As with the Emil, fluid and speedy transitions between altitude and speed, together with well-timed uses of flaps, throttle and manoeuvres, enable the Friedrich to quickly change an engagement to its favour.

That said, the player should keep in mind that the Bf 109 F-1 has less of a punch than the preceding E-3. While mounting a 20 mm MG FF/M cannon in the nose make the aiming somewhat easier, it does lose out on the two MG FFs that had previously been mounted in the wings. This downgrade is somewhat offset by the fact that the Friedrich's MG FF/M can shoot deadly Mineshells, but careful aiming and trigger discipline is required to make the most out of the 60 available shots. Attempting shots at range is a significant waste of ammo. Luckily, the F-1 holds a respectable amount of 7.92 mm MG 17 rounds (500 per gun, 1,000 total), allowing you to spray when needed. Using the "Stealth" ammunition belt for the machine guns may help aim, due to less visual interference from the machine-gun tracers, but this is personal preference.

The climb rate of this aircraft is amazing, with a 16.7 m/s stock climb rate. Once fully upgraded, it can have reach a 20 m/s climb rate, out-performing fighters even a BR spread higher. The engine won't overheat if you keep it on 100%, only if you use WEP for a long time. Once fully upgraded it can out-climb almost anything it faces. However, its turn and roll rate is somewhat disappointing, though with enough energy you can turn fight someone. Just be careful because this plane bleeds a lot of energy when turning at high speed. The energy retention of this aircraft will outmatch most opponent at its BR. However, American aircraft can generally still out-dive you. The engine is also somewhat durable. If the radiator gets hit, the engine can still fly at 100% for a bit before it starts to deteriorate. The flaps can give you a bit of help in turn fighting but they will rip when going beyond 400 km/h (249 mph), so it's important to only use them for a short periods of time.

The Bf 109 F-1 can be outfitted with the following ordnance:

Just as the with the E-1, new players should adopt a hit and run tactic with the Bf 109s (also known as Boom and Run). While often called a Boom & Zoom aircraft, the Bf 109s are not dedicated Boom & Zoomers, and many other aircraft such as the Fw 190 do it much better. While it is true that a pure Boom & Zooming approach can be used for the Bf 109s, limiting oneself to this enormously undermines plane efficiency. It is a pure breed energy fighter.

Keep in mind that while the B-1 and Emil were respectable turners, the Friedrichs turn somewhat worse, so you should begin to think twice before going into a turning engagement. Should you be shot down often and struggle when fighting enemies with the F-1, consider it a helpful and fair warning: you are most likely using the plane wrongly and need to brush up on your flying before attempting the later Bf 109s that nearly all have tough matchmaking.

While the Bf 109 F-1 loses out on the second cannon of the E-3, it still has a good punch. Use the 20 mm only at close range when you are sure to hit. When necessary, use the 7.92 mm MG 17 to hose down an enemy or force them to break off from a friendly when you can't get a sure shot in with your cannon. Engaging bombers in the F-1 is a thankless task since they will most likely soak up a great number of hits. Unless you enjoy being out of ammo and thus defenceless, bombers are just about your lowest priority in the F-1. If you are forced to attack one, aim for its wings, engines and fuel tanks, not the centre.

The F-1 can load either 4 x 50 kg or 1 x 250 kg bombs. Unless you like to fly at a severe disadvantage, do not use the bombs unless you have to in order to win a match, for example after refuelling/restocking at the base. The bomb load is nowhere near large enough to make a fighter bombing trip worth it. Additionally, save the bomb unlocks while grinding out the plane for last and focus on performance.

The F-1 can be particularly effective when used in air realistic battles on account of its reasonable battle rating. The flight performance of the F-1 is excellent for this BR allowing it to outperform many aircraft that it is likely to go up against. This is conjunction with the heavy-hitting HEI (Minengeschoß) round from the 20 mm Motorkanone make for a very powerful fighter if you can get your rounds on target.

In Simulator, the Bf 109 F-1 is quite a friendly fighter that can perform many tasks. It offers great flight performance with its smooth handling, adequate speed, and impressive climb rate and turn rate. The F and all later models enjoy concentrated firepower over the E models, which does not require any convergence setting, making it very easy to aim. The nose gently slopes down from the windscreen, offering great over-the-nose vision. There are also a few bomb options to choose from which are beneficial for ground-pounding or base-bombing, although these are not its primary objectives. However, the Friedrichs do have worse views comparing to early models due to their thicker canopy frames. It also starts to behave poorly during takeoffs due to an increase in engine horsepower and thus propeller torque.

You can bring the least fuel amount, since the 60-round drum runs out fast, making you constantly return to base to rearm so there is no point bringing more fuel. The convergence does not really matter, it might be anywhere between 250-600 m depending on your preferences.

Taking off in a Bf 109 F is considerably harder than its predecessors. When taking off, the Bf 109 will shift severely to the left side due to the huge torque, so consider setting keybinds for left and right brakes, as they are more effective at directional control than the rudder while on the ground. As the plane is just lifting off the ground it will start rolling to the left due to the torque, so you must immediately roll a little right to keep it level, or the left wingtip will strike the ground.

Dogfighting in SB involves everyday RB tactics. Utilise common manoeuvres such as Immelmann, Split-S, scissor, barrel roll, etc. You may want to practice smoothing the aim to make every shell count. Get close and "let the enemy fill up your windscreen". A good distance to open fire is when their wingtips fully fill up the reticule circle. Note: the Bf 109 handles very sluggishly in the roll axis at low speed, so take this into account if dogfighting at low speed/altitude. You can even pull the elevator fully for maximum agility, but only if you pull gently and gradually will the Bf 109 manoeuvre as you wish. If maximum elevator input is harsh and sudden, the plane will start swaying around and enter a flat spin. The aircraft can quite easily recover from a flat spin by fully deflecting elevators downward and rudder to the opposite side of which the plane is spinning, and wait until it starts a dive and gather some speed to pull up.

The Bf 109 F saw major improvement over the Bf 109 E. Its complete front section was overhauled with a more streamlined look and a more aerodynamically efficient profile developed. The wings were improved, ending in a semi-elliptical design reminiscent of the Spitfire. Due to the various changes, it became heavier than the Emil, yet its DB 601 N engine and the better design allowed it to considerably outperform the Emil.

Quite a few Bf 109 F-1 were lost in aerial engagements without battle damage, due to pilots having been unused to its performance. The lack of an accurate speed display that compensated for altitude also complicated matters. Later Bf 109s would have such a display installed. As such, the maximum allowed speed of 750 km/h was often by-passed in the heat of engagements; with the overall structure of the plane not able to withstand outside forces of such magnitude, the plane was lost unless the pilot could somehow recover the plane in time.