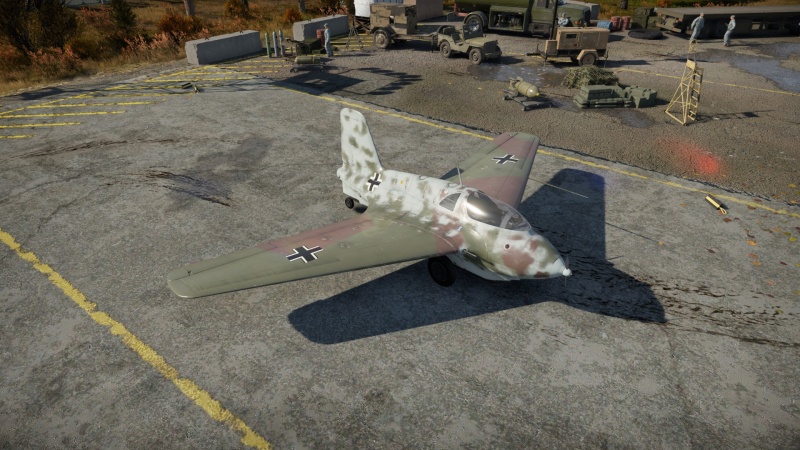 The Me 163 B-0 is a glass (or in this case plywood) cannon. It takes very little damage to severe a wing or to set it on fire. However, as long as the plane doesn't spin out, you can fly relatively easily while missing wingtips or even a whole wing. One odd quirk of the Komet is that if the engine is set on fire, it cannot burnout due to the fire being unable to reach the wings or pilot. So if close enough to the airfield, it's possible to fly back to base to repair.

The plane can very easily rip off its own wings if not careful. Most often, wings rip off when performing two directional movements at the same time at 700-900 km/h, most commonly pulling up + rolling. Try to incrementally change directions when traveling at high speeds, one direction at a time and short bursts of turning.

The Me 163 B-0 can mount 2 additional 20 mm MG 151 cannons. These cannons have no effect on the performance of the plane, and are thus always worth running.

Around 240 km/h, the plane will start violently shaking on the runway, often causing hilariously brutal deaths. To avoid this, there are two methods:

Achieving a safe landing is rather simple. Deploy landing flaps and gears at 400-500 km/h, and continue slowing down to 300 km/h. Once at that speed, gently lower the plane onto the runway, as the plane has a tendency to bounce off the ground. Once on the ground, continue braking until you come to a full stop.

While flying the Komet, throttle control is critical, as it will greatly conserve your fuel. It's worth noting that fuel consumption is not linear. (e.g. 100% throttle = 100% fuel usage, while 25% throttle = 6.67% fuel usage).

There are two main ways to engage enemies with the Komet:

This rocket glider excels in turnfights, with a playstyle very similar to the A6M "Zero" at lower BRs. If you can somehow lure an enemy into turnfighting you, it's extremely easy to outmanoeuvre and kill them. But there are several things to take note of:

A good time to return to base is when on 90-120 seconds of fuel. Anything below that and you'll have to throttle down to conserve fuel on the return journey, taking more time and making the plane far more vulnerable.

After A Successful Landing

Many games will have been decided by the time you return to the runway and rearm for the first time. Always check the scoreboard before taking back off. It might be a 10-vs-1, which (hopefully) the rest of the team can handle without you. On the flipside, it might be a 1-vs-10, and taking off guarantees an early grave.

The Messerschmitt Me 163 Komet is a German interceptor aircraft designed for point-defence that is the only rocket-powered fighter aircraft ever to have been operational and the first piloted aircraft of any type to exceed 1,000 km/h (621 mph) in level flight. Designed by Alexander Lippisch, its performance and aspects of its design were unprecedented. German test pilot Heini Dittmar in early July 1944 reached 1,130 km/h (700 mph), an unofficial flight airspeed record unmatched by turbojet-powered aircraft for almost a decade.

Over 300 Komets were built, but the aircraft proved lacklustre in its dedicated role as an interceptor and destroyed between 9 and 18 Allied aircraft against 10 losses. Aside from combat losses, many pilots were killed during testing and training, at least in part due to the highly volatile and corrosive nature of the rocket propellant used in later models of the aircraft. This includes one pilot by the name of Oberleutnant Josef Pöhs, who was dissolved by the rocket fuel following an incident that resulted in a ruptured fuel line.