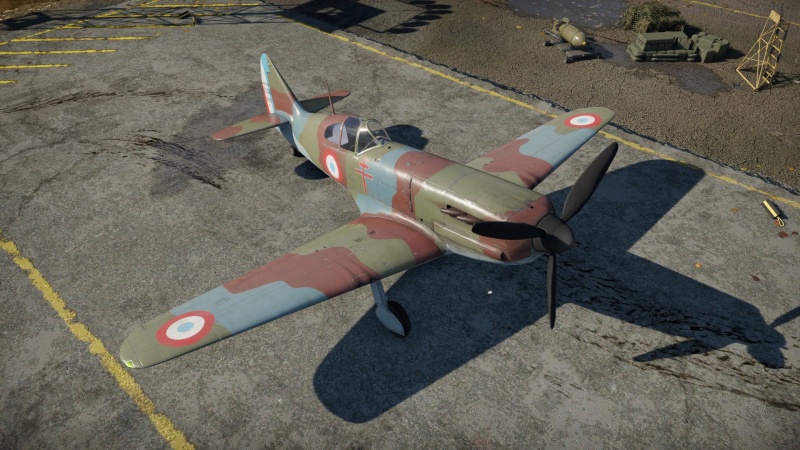 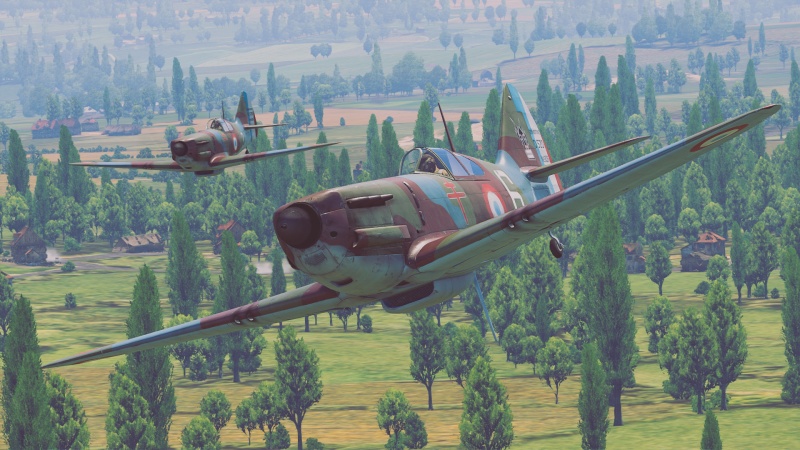 The D.520 is a rank III French fighter with a battle rating of 3.0 (AB/RB) and 2.3 (SB). It was introduced in Update 1.73 "Vive la France". In its early development, the Dewoitine D.520 was marred by official interference. Even though the D.520 was the best fighter France had during the German invasion of 1940, the fighter was hardly a match for the German Bf 109. However, its pilots fought with great bravery and skill to bring respectability to the type during the Battle of France.

This fighter is the classic "jack of all trades, master of none". It can be an energy fighter, bomber hunter, or even a turn-fighter. It depends on your playstyle, and the kinds of enemy aircraft that are encountered.

The main purpose of the D.520 is the role of an interceptor/fighter. It has no bombing capability and thus stands limited to aerial combat. In this respect there are a few things to consider, first and foremost that this is a fighter that does not do great away from a squad. It has mediocre flight characteristics as far as speed, climb and turn is concerned. It is however quite well armoured to compensate for such, meaning that it will stay air-worthy where other aircraft would crash, and instead stands a fighter which is effective in engagements where it has support to rely on. Without such support, it is a very situational plane which can engage certain enemies depending on advantage in altitude, speed, or sometimes even a turning radius. It has a respectable armament of one powerful Hispano 20 mm cannon with a very limited ammunition load (60 rounds), and four 7.5 mm guns with a good deal of ammunition which makes it competitive in Realistic battles. Its strong airframe is able to withstand significant wind resistance making it potent in a longer dive. Despite its limited attributes it handles fairly comfortably and thus can be a real asset to a pilot which employs situational awareness combined with an in depth understanding of the enemy aircraft he will choose to either engage or avoid. It has a potent incendiary tracer round for its machine guns and the Hispano makes it pack a fairly significant punch despite its limited cannon ammunition. The D.520 is best considered a heavier single-seat fighter aircraft which can out-endure other enemy squads due to its armour, but not out-turn, out-run, or out-gun many other types of aircraft on its own rank.

Once the weaponry upgrades are unlocked, it's recommended to use the tracer belt for the 7.5 mm guns and the "Stealth" for the Hispano cannon. Since there are no Air targets belt for the cannon, the Stealth have the strongest punch. Be very careful with the cannon ammo, only fire in controlled bursts with 2-3 shots. Do not use the cannon at longer range because of the limited ammo and the inaccuracy. Use the machine guns to help when aiming the Hispano.

The D.520 is capable for bomber hunting. It has good armour, not too bad climb rate, and the combination of the single 20 mm and four machine guns can easily destroy low rank bombers.

Widely regarded as the the best fighter of French origin to emerge during World War 2, the Dewoitine D.520's combat carrier had two main phases. After the fall of France, large numbers of the type were sent to Africa and some took part in the 1941 Syrian campaign against the British and Free French forces. Fighting alongside the German Luftwaffe, the D.520's pilots were involved in the fight against the Allies during the Operation Torch landings in November, 1942. After the victory of the Allies, a large number of D.520 pilots decided to change sides and fight for the Allies. The type was extensively used by Luftwaffe fighter schools as trainers, this shows the desperation faced by that service late in the war. Accident rates among students were very high.

Compared to other French fighters at the time, the Dewoitine D.520 was relatively well armed. Its armament consisted of one Hispano-Suiza HS404 20 mm cannon with 60 rounds, and four wing-mounted 7.5 mm MAC 1934 machine guns, each with 675 rounds of ammunition.

The D.520's cockpit was set well in aft, giving it excellent downward vision in flight. However, taxiing was quite a tricky task. It required the pilot to weave to retain a semblance of forward visibility.

The D.520 fought with great distinction during the Battle of France. There were a number of notable victories against the Luftwaffe in the North, including the shooting down of the leading Luftwaffe ace Werner Mölders. In the South, the D.520's scored easy kills against the Italians who joined the war on the 10th of June. France's only "ace in a day" was Pierre Le Gloan, who shot down four CR.42s and a BR.20 in a single sortie in a D.520 on the 15th of June.