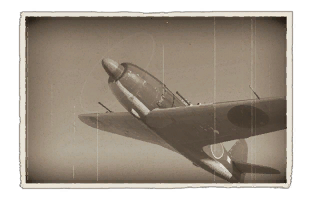 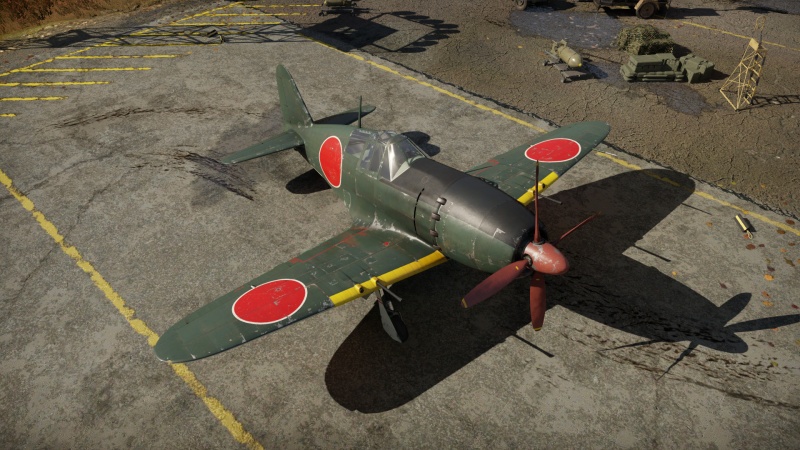 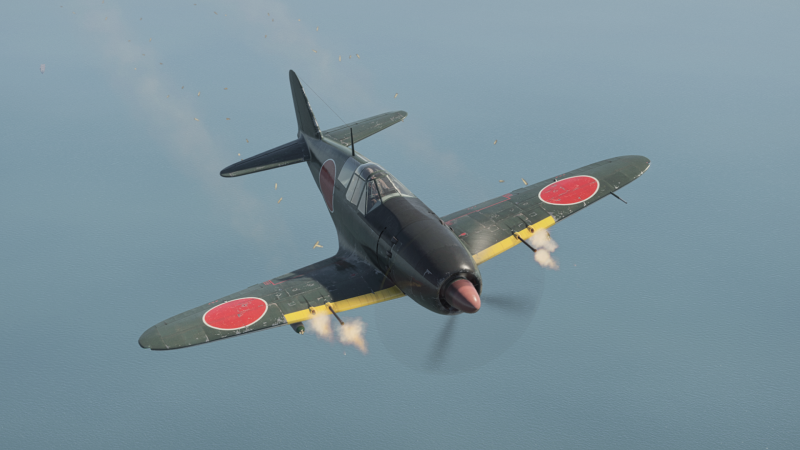 The J2M5 can be outfitted with the following ordnance:

Although a stubby and small aircraft, the Mitsubishi J2M Raiden can be considered one of the best Japanese fighters. Wielding four 20 mm cannons, this aircraft is more than capable of dealing with heavy damage. However, the main advantage the Raiden has over its Allied counterparts is its climb rate. In Realistic Battles, the J2M5 can climb to higher altitudes very quickly, especially when given an air start. This facet of the Raiden's performance is particularly exemplified in the J2M5, the last in-game variant of the Raiden that features the greatest performance of the series. This is partially due to its mechanically-driven supercharger which allows the J2M5 to perform at altitudes once thought impossible by Japanese engineers. Once at a high altitude, it becomes possible to choose when, where, and who the J2M5 want to fight. The J2M5's 20 mm cannons may initially seem rather lacklustre but they have a knack for snapshots or quick bursts of fire that result in a victory while manoeuvring. Generally, the J2M5 performs similarly to the early Fw 190 A variants, having a deadly armament, good roll rate, low top speed, but higher climb rate. The J2M5 differs from this rule slightly as it was built for speed and high-altitude performance. The Raiden is best used as an energy fighter - instead of "turning and burning", or losing all built up speed in turns, attack enemies from a higher altitude and then regain that altitude once the attack has been delivered. The J2M5 excels at Boom & Zoom due to its high rate of climb, deadly armament, and high altitude characteristics.

Sharing this role with other "energy fighters" such as the Fw 190 D-13 the Raiden's main downside is its lack of manoeuvrability. Similar to its earlier mentioned German counterpart, the Raiden struggles to beat enemies in turn fights, especially Spitfires. If caught in a sticky situation, the Raiden pilot may choose to dive away or seek help from teammates. Trying to fight an enemy Spitfire in a turn battle with any J2M is a terrible idea unless the enemy aircraft is damaged or many teammates are nearby. Moreover, the J2M's high-speed manoeuvrability is very poor; often, it becomes a gamble when pulling out of a high-speed dive as the Raiden's elevator authority at high speeds is lacking. The entire aircraft locks up at excess speeds of 645 km/h (400 mph). It can be very difficult to pull out of a dive, roll, or turn when at high speeds with the J2M. The Raiden's manoeuvrability is more or less on par with its enemies in simulator battles, for the most part.

The Raiden pilot may also find themselves outclassed at extreme altitudes by aircraft such as the Ta 152 H-1. All these aircraft have to do to avoid the J2M5 is dive away and build up speed. Fortunately, this aircraft has a surprise - a massive ammunition pool totalling 800 rounds. With good aim and practice, it is possible to "snipe" enemies from upwards of a kilometre away.

The J2M5 wields two 20 mm Type 99 Mk. 1 cannon and two 20 mm Type 99 Mk. 2 cannons in the wings. The stock belts are particularly lacklustre for both of these weapons but since there is such a large amount of ammunition carried in both the effect is virtually negated. The "Stealth" belt has the best combination of AP/API and HEF to shred enemy aircraft, and are recommended for those who do not need a tracer shell to aim. Alternatively, for those not used to IJN 20 mm, the "Universal" belt is the best bet. The "Tracers" belt is filled with HEF-T shells, but they only contain half of the power of a standard HEF and can give away the plane's position.

Overall, the Raiden is best used as a surprise attack, high altitude, high damage output fighter. Where it lacks in the manoeuvrability category, it makes up for in armament and rate of climb. The J2M5 also has improved cockpit visibility over the J2M2 and J2M3 variants.

For ground attack, the J2M5 can equip two 60 kg bombs under the wings. While not the biggest, these bombs can help a team win a match, especially in arcade battles. The J2M5 can also wield armour-piercing ground targets ammunition for its 20 mm cannons, although 21 mm of penetration is nothing to boast about and should be ignored, unless targeting armoured personal carriers (APC) or similar armoured cars.

One other of these variants, the J2M5 with Type 5 30 mm cannons, which didn't make it to the production line, as by the time, bombers got through and bombed the Japanese logistics from December 1944 onward, which took its toll on the aircraft production overall.