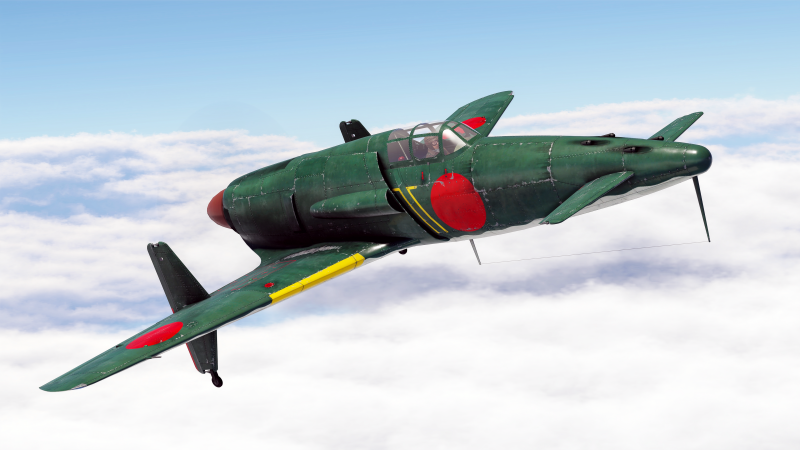 The J7W1 Shinden is a bomber interceptor designed to make quick work of raiding bomber aircraft. It has exceptional performance at altitude, more than exceptional armament and a decent climb rate. Double the weight of a fully loaded A6M, and definitely heaps faster to make up for it. This aircraft thrives with boom and zoom, and has a great energy retention at speed due to sleek aerodynamics. Inherently less stable than a normal tail plane thanks to a rear mounted engine push thrust configuration canard design, it is known for rapid pitch angle changes, great roll rate and less drag, by design. The flap system does not work in game currently however it enhances negative G two fold, at the cost of your speed. You also miss slats on canard wing, which furthermore hampers your agility. The aircraft is very prone to fires, a single hit to the fuel tanks will result in an inextinguishable flame that will for sure be your demise.

The J7W1 is protected by armour glass (70 mm) in front of pilot and steel armour plate (16 mm) in front of pilot in between guns. It is very prone to fires, and which are difficult to extinguish. Engine snipes are common, due to the position of the engine. Wing tip damage can increase the likelyhood of unrecoverable flat spins.

The Shinden is a quick, pusher prop aircraft that excels in keeping its energy up after diving from a high altitude. It is able to climb up to a nice altitude above its opponents and strafe enemies either with a boom-and-zoom or hit-and-run strategy. The Shinden sports four excellent 30 mm guns mounted in the nose making it infamous for its head-on capabilities as they are easy to get on target but require a bit of aim control as the guns have low muzzle velocity, as long as you keep your speed high you will become a big threat to the enemy team. The Shinden is able to outrun a myriad of aircraft at its BR with some exceptions being the F8F-1B and the Spitfire F Mk XIVe as they have more powerful engines. Enemy bombers such as the B-17G-60-VE are optimal targets as your main weapons are able to quickly rip through the bombers armour, heavy fighters such as the F7F-1 or the Hornet Mk.III are targets you may often see at your altitude and make for great prey as they are large and aren't as agile as single-engine fighters. As a Shinden pilot, it is unwise to let the enemy get onto your six o'clock as you aren't likely to shake them with your poor manoeuvrability and the Shinden's engine is mounted in the rear of the plane, meaning any enemy behind you can quickly take you out of the fight just with a few hits to the engine. Like a majority of the Japanese planes, the Shinden lacks any armour to reliable stop bullets from damaging it, however there is a piece of bulletproof glass in the front of the planes cockpit that is 70 mm thick as well as a 16 mm steel plate in the nose, making head-ons a reliable way to kill enemy aircraft as you do not have to worry about enemy bullets hitting your engine. It is highly recommended to avoid participating in dogfights in the Shinden as almost any single prop fighter at its BR will be able to outturn it so it's ideal to stick to energy fighting. The Shinden also has access to 60 kg bombs that can destroy lightly-armoured targets in mixed battles.

In Simulator Battles the Shinden is one of a few planes which gain the ability to preform a "Cobra" manoeuvre and also has the ability to throttle the fuel mixture throttle down enough to kill the engine and stop most engine fires and even some fuel tank fires that it is prone to receiving. Bring the Tracer Belt in most scenarios as all the other belts have practice rounds.