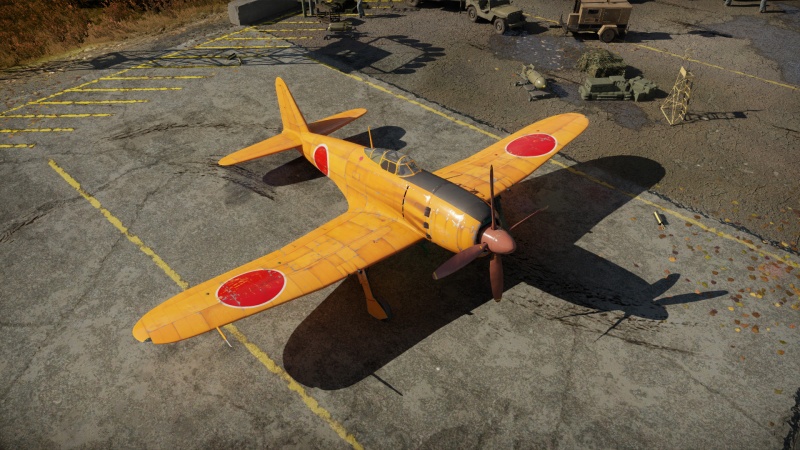 The A7M1 Reppu is the prototype version of the A7M2 in the tech tree fitted with a NK9H engine. In game this fighter is a jack of all trades - excellent energy retention, amazing turn rate, and acceptable speed. These traits make the Reppu an excellent weapon for players who enjoy being the tip of the spear.

The A7M1 (NK9H) can be outfitted with the following ordnance:

The A7M1 Reppu is a relatively heavy plane but still performs very similar to an A6M Zero with the increased performance thanks to its high output engine. This engine however won't be the best outfitted on the A7M platform and a better can be found in the tech tree as the A7M2 which boasts a Ha-43 engine with 200 hp extra.

The A7M1 that takes the best of the A6M and does it better also translates it in aerial combat. With its higher output, very similar manoeuvrability and higher rip-speeds, it can engage in all playstyles; whether the situation calls for it the A7M can either turn fight, Boom-&-Zoom, energy fight and others. Yet even with its NK9H engine, it is sometimes tricky to maintaining energy fights with enemies like the F6F-5, P-51, etc.

The main focus of the A7M1 is a naval fighter, solidified by its only ordnance of 2 x 60 kg that only destroy vehicles at this rank with a direct hit. However, its strong armament of 13 mm and 20 mm machineguns makes it a hard-hitting fighter on most less-protected roof armours (<20 mm).

This is where the A7M1 (NK9H) shines and players familiar with the A6M will feel right at home and. Newer players will become familiar with its playstyle quite easily due its better performance and more forgiving yet punchier gun-choice with plenty of ammo to spare.

Only couple of planes like Spitfires can be a challenging opponent at low altitudes, mainly because most planes will lose energy when fighting with the A7M1 at low altitudes when the A7M1 is able to outturn and be on their tail in couple seconds. The 13 mm and 20 mm armaments combined are very deadly and will tear down a plane in a good placed burst. Aim for center of mass when turn fighting, and tail when tailing, especially the elevators.

Turn fighting at high altitude is rather difficult since, the higher you go, the less air pressure there is. This means there will be less air to lift your plane when doing a hard turn compared to sea level, meaning the A7M1 will not be able to turn as fast as you do at sea level. This should be taken into consideration since most of the planes at high altitudes (4+ km) often have superchargers or turbochargers (Wyvern S4 for example) and will make an easy prey out of you, as you do not maintain the same energy nor speed they maintain.

The drawbacks from high altitude does not stop the A7M1 from fighting in the clouds. One of the easiest targets for the A7M1 are bombers. They are big, have big wingspans and are often slow (unless they are dive bombers or strike fighters). They can be easily destroyed with the 13 mm and 20 mm armaments due to their sheer calibre and destructive ammunition. When engaging a bomber, aim for the engines or wings. With the right belts equipped, a few well placed shots the bombers will catch fire or even shred the wings.

Be careful when engaging bigger preys as they might turn into a predator if handled wrongly. Hit fast and hard, put bullets into the cockpit or make short work of their wings. Do not tail it, most bombers will shred the A7M badly and a fire is most guaranteed, which the A7M won't last long through.

Main article: History of the A7M

In late 1940, just after the A6M started entering its production phase, the navy requested Mitsubishi to start development of a direct successor by 1941, but due engine choice for a high-output compact engine was scarce, and the development team having their hands filled with development of the A6M2 Mod.21 and developing the J2M made Mitsubishi decide to scrap the request.

By 1942 as development of the A6M3 Mod.32 and J2M2 Mod.11 have been finished, the navy once more ordered Mitsubishi and their team to design a direct successor which would be faster and as nimble as the Zero, but as before, engines which would suit the plane were still in development and the team had to design a plane while still having to wait on a viable engine.

As development of the A7M platform came to an end, the last set piece and main problem of the A7M development, being the engine, led to the first prototype to make use of the Nakajima NK9 "Homare". This singular plane would be the first A7M and respectively would become the A7M1 and a trial flight would be performed on the 6th of May, 1944.

While the wingload was acceptable of 150 kg/m², manoeuvrability and handling were excellent but the engine was simply underpowered and couldn't meet the speed requirements the Navy were looking for and ended up in a disappointed cancel of the project.

But as Mitsubishi already got a greenlight to use Mitsubishi's home-made engine with the MK9 beforehand, the project sparked interest once more for the Navy with the A7M2.