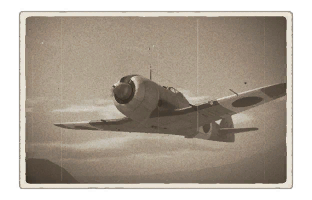 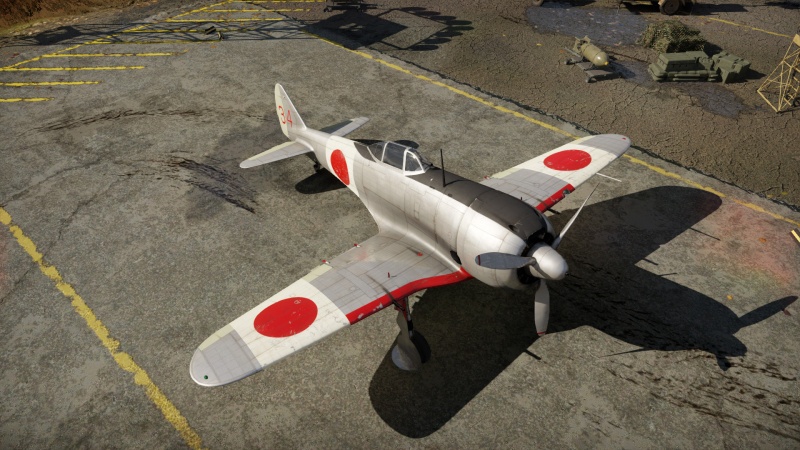 The handling is good in general. During a take off the Ki-44 feels nose-heavy without any flaps deployed therefore after retracting the gears and flaps you need to pitch up a bit until the plane picks up some speed. Only elevator trim is available, so when the stick is at its deadzone, the Ki-44 will roll and yaw to the left side. Therefore you always need to pull the stick to the right which can get a bit annoying. It has excellent climb rate of around 14 m/s at 400 km/h, with 100% throttle and no MEC. This means that it can get to an ideal altitude of around 3,000 m very quickly. In a dive it easily accelerates to around 550 km/h while still having responsive controls, however it does not retain the speed well after leveling out. Note that its engine will overheat unbelievably fast. With WEP it heats up to >243° within 15 seconds. Thus you must utilise the WEP only when you have to, for example in a zoom climb or a high yoyo. The good news is, the engine can cool down quick enough for another 15-second WEP.

The Ki-44 has a lovely low stall-speed of around 160 km/h and is also very controllable when getting out of a stall. However the handling gets very sluggish when slower than 200 km/h so make sure that there is no one behind you. When intercepting planes, it is crucial to know what the target is. If it is a bomber/attacker with decent defensive firepower, great turret coverage, or robust protection, then you might want to disengage after some attempts if you don't want to die. From the hard-hitting M2 Browning to the fast-firing MG 15, any gun can critically damage the Ki-44 especially on the engine, fuel tanks, and pilot which can always lead to a later crash. Before attacking try to get an altitude advantage and perform deflection shots. To maximise the damage aim for their wings and engines, as the fuselage usually soaks up lots of bullets. Only fire when the bomber passes in front of your guns. This short window might seem inadequate to do anything... and it usually is, unfortunately. The slow velocity, light projectiles and low one-second burst mass usually guarantee no critical damage. However sometimes it only takes one bullet to set the target aflame, if you are lucky.