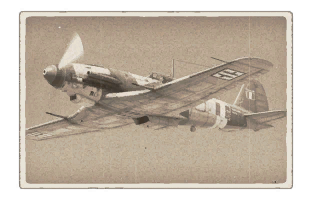 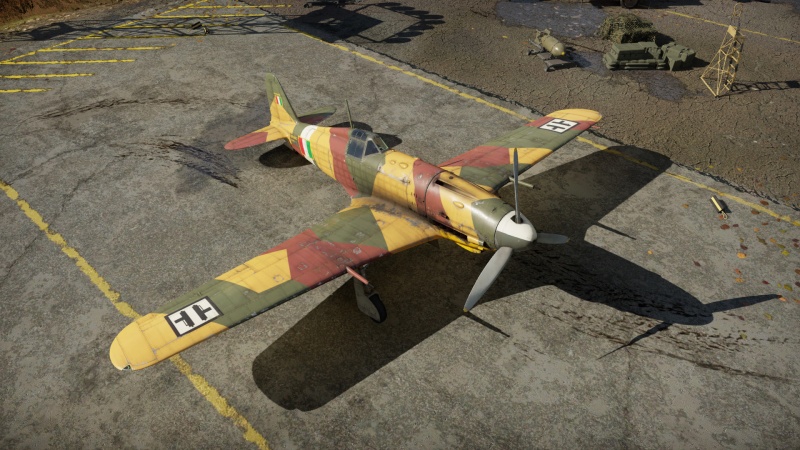 Adequate is the word that comes to mind when referring to the flight characteristics of the G.55. While not particularly good at anything, it isn't particularly bad at anything either, which makes it a solid jack-of-all-trades type plane. Overall, it is a smooth flyer that has decent acceleration, speed and climb rate while sporting a powerful triad of MG 151's which load the feared Minengeschoß round that can tear through planes like a hot knife through butter. It excels the most in medium altitude (3-5 km) as a powerful energy-based dogfighter which can take advantage of its great engine power to defeat most allied fighters it comes across.

The twin Breda HMG's are reliable for easily taking down opponents with air targets or stealth belts, however they have fairly poor ballistics beyond 300 m. The pilot should use them as scouting weapons in order to line-up shots for the MG 151's to save ammunition, which isn't necessarily needed as the 151's have a large pool of ammunition, but it does help when trying to play more conservatively.

The G.55 serie 1 can be outfitted with the following ordnance:

The G.55's main strong points come down to its engine power, its light construction and its wing profile, which grant it a high sustained rate of climb, a tight turning circle and the power output to endure sustained horizontal manoeuvring. It performs best up to medium altitudes around 5,000 m (16,404 feet), after which it is generally outperformed by its competition. unfortunately, its light construction and its wing profile mean that when the "Centauro" goes into the vertical, it bleeds speed very easily. Its top speed in a dive is unimpressive and it can barely catch up in a zoom climb with its competitors. The armament is very effective as well, however, the MG 151 is not very accurate at range, which should be taken into account when engaging in head-on passes.

The Fiat G.55 serie 1 (G.55/1) was the first production aircraft series of the Fiat G.55 family. The aircraft's origins can be traced to a variant of the Fiat G.50, to be powered by a new Fiat RA.1050 inline engine (a license-built variant of the DB-605). The first G.55 prototype flew on 30 April 1942, immediately exhibiting its great flight performance and handling characteristics. Though initially equipped with a 20 mm MG151/20 cannon and four Breda SAFAT machine guns, the design was revised to include two additional cannons replacing two of the wing-mounted machine guns. This armament scheme became the standard for G.55/1 aircraft, though some had field-modified wing machine guns instead of the cannons.

The aircraft was test flown against its rivals, the C.205 and Re.2005. Of the three, the G.55 exhibited the second best characteristics. As a result, it and the C.205 were both ordered into mass production, with 1,800 G.55 aircraft ordered. The first 34 pre-production aircraft were completed identical to the prototype, and later modified to serie 1 standard, with underwing racks for a single 50 kg or 100 kg bomb. The aircraft's strong high-altitude performance and adequate armament made it well-suited for the bomber interception role it was meant to fulfil, as the Italians intended it to be used against American heavy bombers such as the B-17 and B-24.

The first G.55/1 aircraft began deliveries in summer of 1943, and soon began flying sorties against American bombers. However, the aircraft's complicated construction process meant that only 35 aircraft had been delivered before the Italian Armistice in September of that year. However, several G.55/1s went on to serve with the Northern Italian air force, still loyal to the Nazis. These aircraft served until late 1944, when they were replaced by later variants of the Bf 109.

In early 1942, the German and Italian air forces exchanged officers for visits to their respective aircraft production lines, to investigate ways to standardize axis aircraft production. In particular, the Germans were interested in the G.55 and its counterparts - so interested that it attracted the attention of Hermann Göring. After various flight tests, the German Air Ministry decided that the G.55 was an excellent fighter and started setting up a production line in Germany as well. As a result, various G.55 variants were produced in Germany. However, due to the relatively short production run before the Armistice, only 35 G.55/1 aircraft were built.