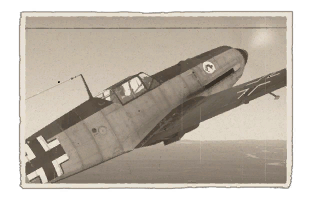 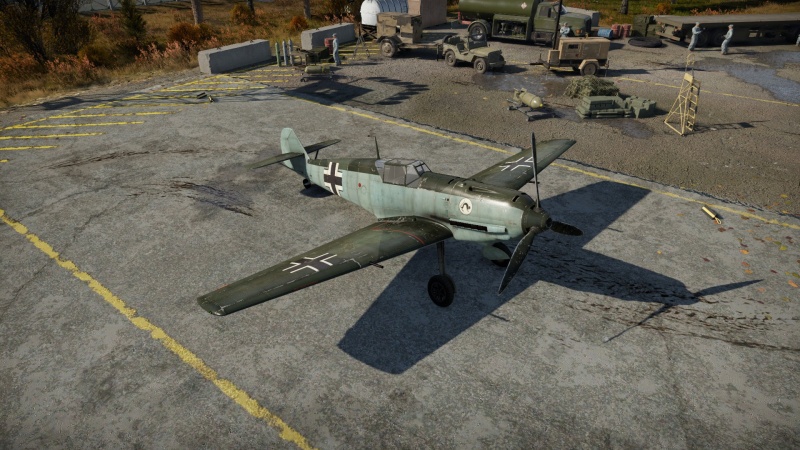 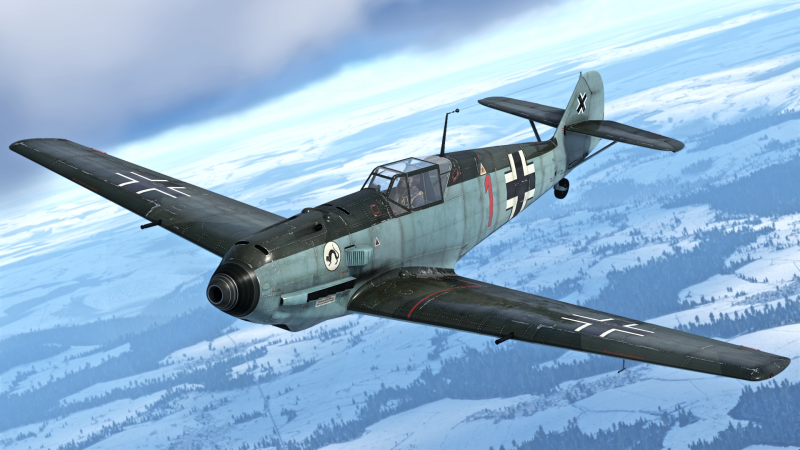 The Bf 109 E-4 is a rank II German fighter with a battle rating of 3.0 (AB/RB/SB). It was introduced in Update 1.53 "Firestorm". The differences from its predecessor are little in quantity, though they have a drastic effect in-game. The E-4 is slightly heavier, but thanks to better surface polishing and a +150 hp WEP, it is faster than the E-3. The greatest advantage though is the installation of MG FF/M cannons with minengeschoße.

After having played both the E-1 and E-3, players will rejoice upon unlocking the E-4. While essentially the same plane, the E-4 overcomes the inadequate MG FF with MG FF/M, featuring the fantastic minengeschoße. With two wing-mounted MG FF/Ms with 60 rounds each, the plane has an even more deadly punch, attributed solely to the new thin-walled 20 mm HE shells. Fighting in the E-4 is essentially the same as with all E-frame 109s.

Remaining a great energy fighter against its historical opposition, the E-4 is somewhat troubled by the fact that it often faces mid-to-later-war planes such as the P-47D. To engage these, make sure you have a clear energy advantage; if attacked, fly defensively and attempt to bleed the enemy's speed while pulling them down. The Bf 109 E-4 is often regarded as a poor turner, a reputation coming from the fact that its main rival, the Spitfire, simply did it better. However, with combat flaps, the E-4 is a respectable turner able to out-turn most planes that outperform it in other ways. However, keep in mind that one of the changes from E-3 to E-4 increased the frame's weight. Flat turning should only be reserved for extreme situations.

When engaging the Bf 109 E-4, doing so in a group is your best bet. While it can easily pick off one or two planes, it doesn't have very much cannon ammo and will be easily overwhelmed when engaged by multiple foes. In a one-on-one engagement, try to trick the pilot into bleeding their energy. While the Bf 109 E-4 will outrun most planes at its rank, it can also be outgunned by them. Once it uses all its cannon ammo, it's only left with two machine guns, which most planes take little to no damage from at a glance.

The two canons are mounted with one in each wing whereas the two machine guns are mounted in the upper fuselage just in front of the cockpit.

The main armament is identical to that of the Bf 109 E-3. However, there is one critical difference. The MG FF/M can fire minengeschoße shells. Minengeschoße's shell is very thin, allowing more incendiary material to be used; however, these very same characteristics prevent them from being fired from older MG FF versions (like on the predecessor E-3). Thus, the MG FF/Ms are far more powerful than the MG FFs.

The Bf 109 E-4 can be outfitted with the following ordnance:

The E-4 can load either 4 x 50 kg or 1 x 250 kg bombs. Unless you like to fly at a severe disadvantage, do not use the bombs unless you have to in order to win a match, for example after refuelling/restocking at the base. The bomb load is nowhere near large enough to make a fighter bombing trip worth it.

Just like the Bf 109 E-3, the E-4 is a well versatile fighter, being able to both do hit and run strikes and dogfight enemy planes, even though its strong point is the hit and run tactic having great energy advantage over most enemies it will face. Having a great climb ability and decent acceleration makes it an enemy to be aware of. There are other German planes that can perform the hit and run tactic far better than the 109, for example the Fw 190, the Bf 109 on the other hand is the more versatile fighter. Having a excellent climb ability will give the E-4 the advantage it needs to be able to strike on enemy fighters from above, having a high speed gain in a dive gives the E-4 the ability to easily catch up to enemies. But one con with its speed is that when it gains too much speed it can lock up and be difficult to manoeuvre and pull up. Being able to catch up with enemies is not the only thing the E-4 is good at. It has an average turn rate but in proper hands the E-4 can be a fearsome dogfighter competing with most fighters. Some advantages it has over the Spitfire and Hurricane is the engine, being able to do manoeuvring without choking the engine with lack of fuel from doing manoeuvres.

The 109 E-4's strong points is being equipped with 2 x MG FF/M compared to the E-3 that uses the MG FF. The MG FF/M lets the E-4 use minengeschoß in its belts having a devastating mine shell is always a benefit to have in its arsenal. Though having the devastating minengeschoß shells its lack of ammunition in the MG FF/M with only 60 rounds each makes it limited with how many shells and the cannons should be used with care when they got a clear shot on the hostile plane. Not only being armed with cannons the E-4 also comes equipped with 2 x MG 17 that holds 1,000 rounds each and can be a leading guide for the 20 mm cannons. Though should not take the small calibre MG 17 for granted. They can also tear enemies at the BR with ease, having a fast rate of fire means it can put a lot of bullets into the enemy plane in short amount of time and that is a excellent thing since greater chance to hit vital areas of the target. Preference is to use the machine guns and cannons together for a devastating effect on the target but they can be used separately for a good effect still.

Enemies to be wary of are mostly turn fighters like the Spitfire and I-16 since they can out turn the E-4 with ease. Also take note of hit and run planes like P-38E and La-5 since though they might not have the greatest climb ability, they can still be formidable opponents when it comes to hit and run attacks.

The Bf 109 E-4 was the replacement of the older E-3 version that was used in Battle of Britain, upgraded with new 20 mm MG FF/Ms and better protection for the pilot. Upgraded with the 20 mm MG FF/M made the E-4 unlike the E-3 being able to use the Minengeschoß shells. Just like the E-3, the E-4 had an extensive use in the Battle of Britain facing formidable opponents like the Spitfire and Hurricane. Entering production in 1940 being based on its predecessor the E-3 most of them got converted later into the E-4.