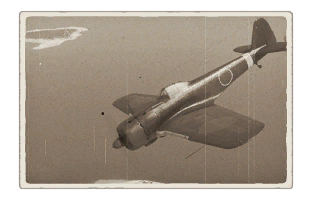 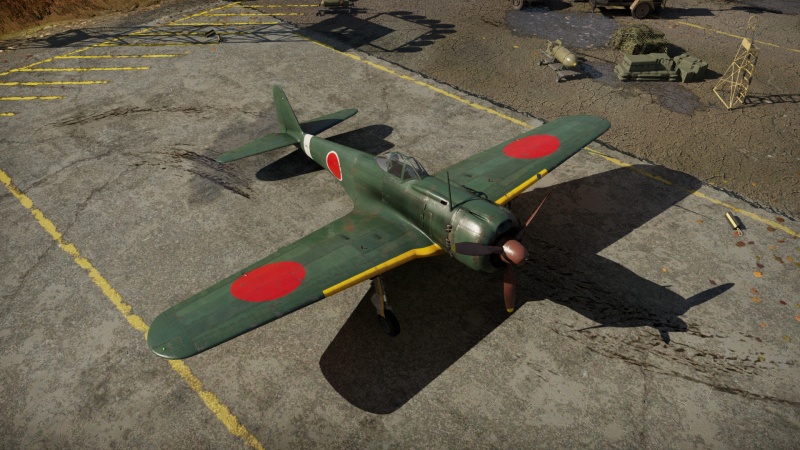 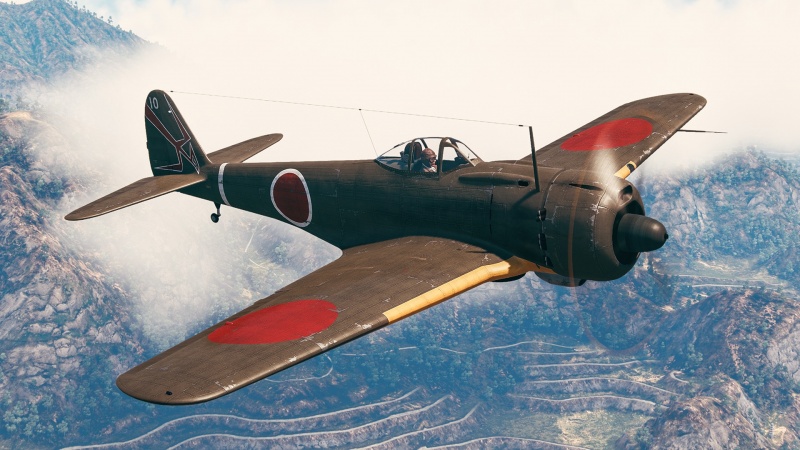 The Ki-43-III otsu is as a rank three aircraft in the Japanese Army Air Force line. Like its rank two brethren, it is an extremely manoeuvrable and lightweight aircraft. It has exceptional climb and roll rate making it a fairly hard target to hit in the hands of a skilled player. The trade-off, however, is its extremely fragile nature - a good hit even from a plane equipped with rifle-calibre guns could do some serious damage if one doesn't push the plane to its limits in any of the game modes. On the other hand, the rather modest pair of fuselage-mounted 12.7 mm Ho-103s of the Ki-43-II have been replaced with a pair of the hard-hitting Ho-5 20 mm cannons, which for its battle-rating gives the Hayabusa the power it needs to take down anything it opposes. Like many of the Japanese fighters, dogfighting is the key to staying alive. By using the combat flaps and throttle in a optimal manner, this aircraft can get behind nearly every opponent it meets in a low to mid altitude dogfight. With a modest ammo load of 300 rounds, trigger discipline is important here. It is best to get up close (200-500 m is optimal) and then let off several short bursts, firing until the enemy is critically damaged or the plane is destroyed.

The stock 20 mm cannon belts are a pain. Research the "Offensive 20 mm belts" fast. Otherwise there is not a lot necessary to upgrade, mainly performance modules. The engine and compressor modules do wonders. Payload unlocks should be considered last. The Ki-43 is a fighter and not a ground attacker like the B7A2.

The Ki-43-III otsu can be outfitted with the following ordnance:

Unfortunately, this comes at a cost. The Ki-43 sees primarily American planes which are far faster in both level flight and dive while having significantly better armament. Evading fire becomes difficult when facing planes such as the P-47N-15 which has 8 x M2 Browning .50 cals which are extremely deadly and have a ridiculous volume of fire.

As such, the Ki-43 is almost entirely dependent on siphoning kills from unwary pilots, pilot errors, manoeuvre kills, and pilot frustration which makes it quite a difficult plane to play. However, if played right, and abusing its insane roll rate and turn time, you can take down multiple enemies with your cannon and force others to crash out of frustration and over-eagerness. Note that this aircraft will experience severe rudder lockup when faster than around 450 km/h, resulting in awkward aiming adjustments if the target manoeuvres, so you need to cut throttle appropriately to control your speed.

While having sufficient flight characteristics, the Ki-43 is extremely fragile and can get critically damaged by almost all guns. From the hard-hitting M2 Browning to the fast-firing MG 15, any gun can badly hurt the Ki-43 especially on the engine, fuel tanks, and pilot which can always lead to a later crash. Before attacking try to get an altitude advantage and perform deflection shots. To maximise the damage aim for their wings and engines, as the fuselage usually soaks up lots of bullets. Only fire when the target passes in front of your guns. This short window might seem inadequate to do anything, but an accurate burst can blow off some control surfaces / damage the engine. And sometimes it only takes one bullet to set the target aflame, if you are lucky.

When using the Ki-43-III otsu, do remember this plane can easily out manoeuvre anything it may face. Do not try to go head on with enemy planes as even a single round can damage your plane. Instead, position for a head on, but pull off about 1.2 km out, go under the enemy aircraft, and loop around for a shot. You may need to repeat this manoeuvre several times to secure a firing position.

Most Allied opponents at the battle rating can outrun the Ki-43 with ease. Most concerning are planes such as the P-47D/N or F4U Corsair, as both planes are over 80 km/h (50 mph) faster on the deck and also possess exceptional .50 cal armament. Use the Ki-43's manoeuvrability to dodge shots and try to slowly drain the energy of your opponent and force mistakes.

When facing the Ki-43-III otsu do remember that it is very manoeuvrable and that it can easily out turn what it faces therefore try to apply Boom & Zoom tactics against a Ki-43-III otsu.

After some time in the field, the Ki-43 was to receive a major upgrade based on feedback from pilots, which included replacing the Ha-25 engine with the more powerful Ha-115 engine, a two stage supercharger, pilot armour, self-sealing fuel tanks and many more minor improvements. The first prototype of what was to become the Ki-43-II (Army Type 1 Fighter Model 2) was completed in February 1942. The last major modification of the Ki-43 was done in 1944, combining the minor modifications of the IIa and IIb with the more powerful Nakajima Ha-115-II engine. These minor modifications over the Ki-43-II included a reduced wing-span (improving the plane's low and medium speed performance), increased pilot armour, improved oil cooler, and modified carburetor intake. This new Ki-43-IIIa (Army Type 1 Fighter Model 3A) entered production in October 1944 with approximately 1,000 being completed before the war ended. The Ki-43 would become the most numerous of all the Japanese Army's fighters. While operating in Malaysia and Burma the plane received the codename "Jim" and in the Pacific Theatre it received the allied codename "Oscar". The codename "Oscar" was eventually selected as the official code name for the airplane by the Allies.