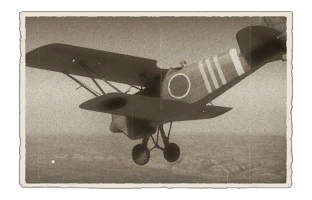 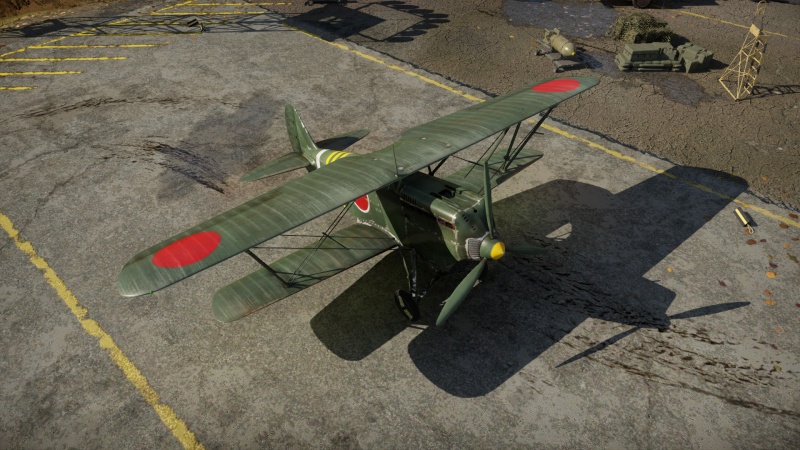 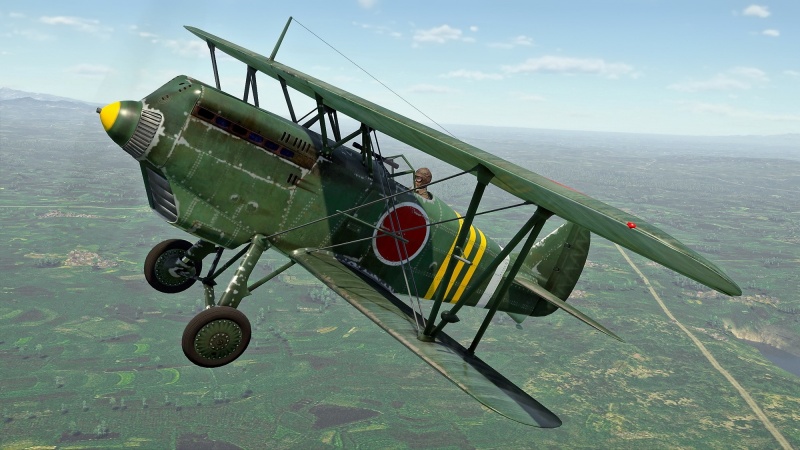 The Ki-10-I C is a rank I Japanese biplane fighter with a battle rating of 1.0 (AB/RB/SB). It has been in the game since the start of the Open Beta Test prior to Update 1.27.

The Ki-10-I C's low speed and tight turning ability make it a great turn-fighter, like most Japanese light fighters. The Ki-10-I C excels at low and slow turn fighting at very low altitudes where enemies cannot out-dive it. Additionally, it has a climb rate to climb away from enemy biplanes. Turning stalls should be avoided, as the Ki-10-I has a tendency to enter uncontrollable spins.

Its twin 7.7 mm armament is one of the weakest in the game, so strafing attacks on all but the least armoured targets are not recommended; Artillery, vehicles, and landing craft are the primary targets, while the Ki-10-I C's weak construction makes attacking AAA and bombers risky propositions, but not impossible. Cargo Ships, tanks and armoured cars are invulnerable to the Ki-10-I C. Instead, the best Ki-10-I C targets are other biplanes or slow monoplanes, such as P-26s, Fury Mk Is or Nimrod Mk Is. Like most other planes, the Ki-10-I C works better in numbers. Ki-10 pilots should focus primary on sticking together and working as a team.

Like many biplanes before and contemporaries of the Ki-10-I C, armour was not an option, survival was based on the pilot's grit. Armour added weight, weight the early biplanes could not afford to carry and still be a viable fighter. Flying in open cockpit and fabric-covered aircraft, the only protection the pilot had was to place his engine between him and his enemy, otherwise, the pilot was vulnerable. Typically aircraft like this have the engine at the nose of the aircraft, followed by the fuel tank and then the cockpit, all three critical components relatively crammed together. The pilot's toolbox had to contain situational awareness as he needed to know where the enemy was around him. Tracer rounds could easily ignite the fabric-covered aircraft or large fuel tanks, so it was imperative the pilot was the attacker, not the one being attacked and knowing where the enemies are at can help avoid getting shot at.

For such low-rank vehicles the order of research does not really matter. Improvements in firepower by new belts and new machine guns help a lot in Arcade Battles. For Realistic mode, performance upgrades are more often necessary.

The Ki-10-I's low speed and tight turning ability make it a great turn-fighter, like most Japanese light fighters. The Ki-10-I excels at low and slow turn fighting at very low altitudes where enemies cannot out-dive it. Additionally, it has a climb rate to climb away from enemy biplanes. Very fast dives should be avoided, as the wings will shear off at very high speeds. Similarly, turning stalls should be avoided, as the Ki-10-I has a tendency to enter uncontrollable spins.

Its twin 7.7 mm armament is the weakest in the game, as it has a lower fire rate than its contemporaries, the ShKAS, Browning, and MG 17. The belts are poor as well; Stealth is most recommended, as it has the most AP-derivative shells. Strafing attacks on all but the least armoured targets are not recommended; Artillery, Vehicles, and Landing Craft are good and soft targets, while the Ki-10-I's weak construction makes attacking AAA and bombers risky. All bombers are pretty much invulnerable to the Ki-10-I (Beaufort, A-26, etc.) unless you are extremely good at making consistent pilot shots. Cargo Ships, Tanks and pillboxes are also invulnerable to the Ki-10-I. Instead, the best Ki-10-I targets are other biplanes or slow monoplanes, such as P-26s, Fury Mk Is or Nimrod Mk Is. The best practice is to aim for the wings! The fuselage's of all planes will absorb your shells like a sponge. Like most other planes, the Ki-10-I works best in numbers. Ki-10 pilots should focus primarily on sticking together and working as a team.

A biplane of composite structure with non-retractable landing gear and an open cockpit. This plane was created in the design bureau of Kawasaki Heavy Industries under the direction of Takeo Doi. While the new fighter was being designed, experience and structural solutions were used from the Ki-5 monoplane fighter developed earlier.

The designers, headed by Takeo Doi, managed to create quite a successful aircraft with good flight performance. The Type 95 fighter got off the ground for the first time in February 1935, and it reached a maximum speed of 400 km/h during tests. At the time, this was probably the fastest speed attainable by a biplane.

The aircraft was launched into full-scale production under the designation of "Army Fighter Type 95 Model 1" (Ki-10-I). A total of 300 fighters of this variant were supplied by the Kawasaki company from December 1935 to October 1937.

The aircraft was equipped with a 850 hp Kawasaki Ha-9-IIa twelve-cylinder, double-row, liquid-cooled engine that featured a gear-driven centrifugal-type supercharger and a three-bladed, controllable-pitch metal propeller. The engine itself was a licensed version of the German BMW9.

The Ki-10's fuselage was a semi-monocoque with stressed duralumin skin panels overlapping each other. This technology made assembly easier, but the joints had to be puttied and covered with a thick layer of paint and lacquer to reduce friction resistance. As a result, the external finish was so thick that one could not see any of the duralumin sheets' joints, even when standing quite close.

All of these machines were produced with drop-shaped wheel fairings, but these were usually removed when the plane was operated on temporary airfields.

The plane's armament consisted of two synchronous 7.7 mm Type 89 (Vickers system, heavily upgraded) machine guns with 450 rounds each. These guns were mounted over the engine. The trigger button was placed in a very original location, not on the aircraft control stick but on the throttle.

The aircraft's instrumentation and on-board navigation lights enabled the Ki-10 to perform night flights. Provision was made for the installation of an oxygen apparatus. Command vehicles were equipped with radio sets. Externally, these fighters could be identified by the radio antennas mounted over their biplane cellules.