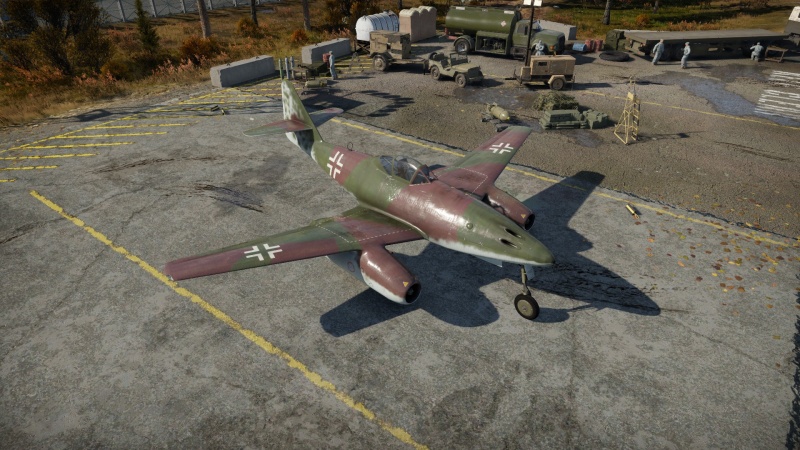 The Schwalbe in its interceptor role.

This aircraft is a true heavy fighter in every way: bomber "box formations" fall apart under your heavy rocket bombardments, flying fortresses perish within seconds by this machine's MK 108 cannons, whose unusually low velocity you will have to take into account. 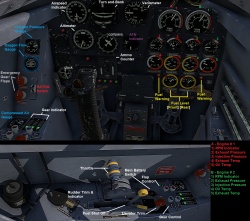 The biggest issue of the Schwalbe is its bad acceleration across all speeds. Thus, Compressor and Engine upgrades have the highest priority. The cannons' stock belts are decent, but the high explosive content increases with the new ammo in Offensive 30 mm. Including them into the upgrade route is not a bad idea. The same applies for the rockets in the R1 modification. Being able to knock out bases (~40) or tanks (direct hit) with these warheads makes a long game much easier to win. New 30 mm cannons is an interesting upgrade choice as it increases accuracy above 300 m (350 yds), but the MK 108 will still be unable to hit any at 500 m (600 yds).

The MK 108 has a high damage potential. With a great in-game burst mass of 14.52 kg/s (32.01 lbs/s) and the great explosive warhead "Minengeschoss" (mine-shell), this weapon will vaporize aircraft, especially bombers. But every coin has a flip side and the MK 108 is no exception. The amazing rate of fire is exchanged with a very short barrel and small propellant charges, resulting in very poor ballistics. The MK 108 cannon fires very slow shells with a great bullet drop.

The MK 108 cannons have an ammo indicator in the cockpit, which is typical of Luftwaffe aircraft. It sits directly beneath the compass (the one with the little plane in the middle). The left white column is for the two top autocannons. The right one is for the bottom two cannons; this bar is also taller than the left one as the ammo count is different for the two pairs.

The MK 108 is a very bad anti-fighter weapon particularly in a jet-to-jet combat. Bullet drop and slow velocity result in a severe difficulty leading shots at ranges above 300 m (350 yds). In dogfights where both aircraft are constantly turning and changing direction, this trait gets even worse. The high speed of jet battles push the necessary lead for hitting the target farther in front of the enemy. Training with this weapon system before getting into battle is heavily advised.

All four cannons are arranged in bundles of two mounted on the underside of the upper mounted in the nose of the aircraft. Two are outfitted with 100 RPG, while the other two have 80 RPG.

As a heavy fighter, the 'Schwalbe' is not nimble, but neither are other first-generation jets. Compared to them, the Me 262 is actually quite agile and possesses a speed, roll, and damage output advantage against certain adversaries.

However, don't be fooled - this aircraft was the first operational jet fighter. Generally, anything 3 years older than the 262 outclasses it. Against them, the 262's turn rate is your only advantage, with the exclusion of the Gloster Meteor. Avoid combat with Meteors if possible, however, if engaged with a Sea Meteor or any later variant, do not attempt to dive as it will only make your situation worse. Try alternating barrel rolls to force them to overshoot. Joystick users can try the classic trick of banking the aircraft about 120-180 degrees out of phase of the enemy aircraft with a positive G-load but as usual, they will need to watch their altitude carefully.

Seek and annihilate any heavy bombers with the impressive armament the Me 262 brings to the battlefield. Avoid getting shot at though! The 262's engines are weak and like to burn. If the engines catch on fire, throttle down and then shut off the engine (default "i") and go into a dive to gain speed. Rockets are also fun in this mode, as the Schwalbe has the option to carry up to 48 55 mm R4M rockets. Don't forget to set a detonation timer for the R4M missiles so they do not require direct hits. 600-800 m is suggested.

Going against other countries would bring out their jets. Other countries' first-generation jets include the F-80A-5, Meteor Mk. 3, Vampire, MiG-9, Kikka and Yak-15. The Me 262 is the heaviest of them and thus reigns straight line kinetic energy retention at high speeds.

The Messerschmitt Me 262 was a German jet fighter, fast bomber and reconnaissance aircraft of the WWII era. It was the world's first mass-produced jet fighter and the first jet aircraft to see combat. The first serial variant, the Me 262 A-1a, unofficially known as 'Schwalbe', arrived for flight testing in Lechfeld in July 1944. The construction used generic alloys, was almost fully riveted and its weight was rather high, all for the sake of ease of mass production. The Jumo 004B-1 jet engine (later B-2 and B-3) also housed a 2-stroke Riedel motorcycle engine, used as a starter. Two small 17-liter fuel tanks were used to power the starter. The rest of the fuel was housed in the fuselage. Two main and two extra fuel tanks were used. Main tanks held 900 liters of fuel, the nose tank had 170 liters and the rear tank held 600 liters.

The Me 262 A-1 was easier to fly than the Bf 109G. Considering the great range of available airspeeds, the cockpit equipment was rather sparse. Although the turn radius for the jet fighter was significantly wider than that of a piston fighter, it could better retain high speeds in a turn. Its acceleration was much worse than that of a piston plane, but the Me 262 had an incredible dive rate, which could occasionally threaten going past Mach 1.