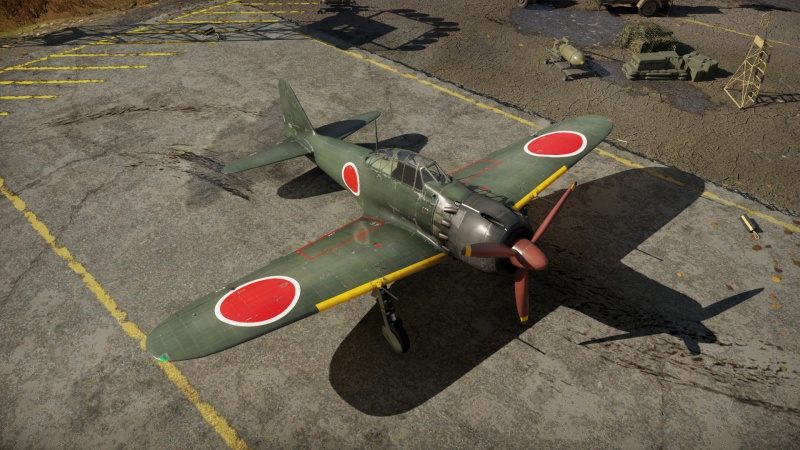 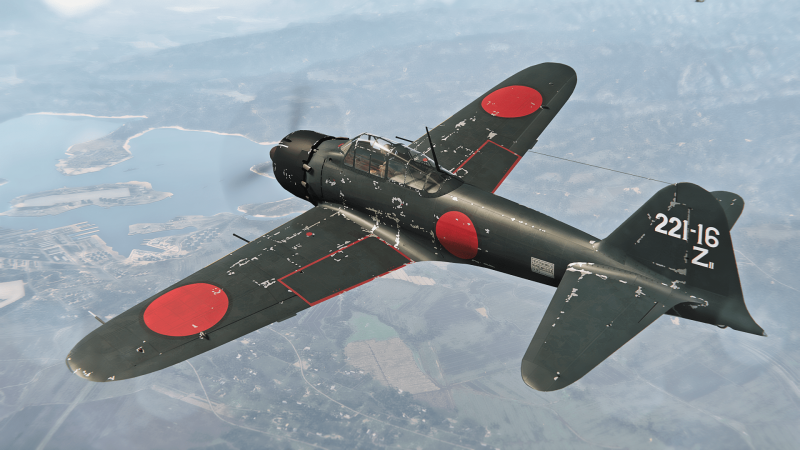 Other additions to the Model 52B (Otsu) include 45 mm thick armoured glass to the windscreen, a larger propeller spinner was fitted, and a revised gas outlet near the windscreen.

With the additional armour, this version is inherently heavier, making the aircraft more sluggish in turns and manoeuvres over the previous A6M5s.

This is the first version with armour in both the pilot's seat and the windscreen.

The A6M5 otsu is armed with:

Gun convergence is best set at 400 m or less, as most engagements are in very close quarters.

The 20 mm cannon has more explosive potential, as well as some incendiary bullets. Stealth belts are actually again a great choice for the 20 mm cannon. They will shred the enemy to bits, sometimes light on fire. Another good belt choice is tracers as it is solely explosive, and are also a good asset to take into battle with the downside that firing it will alert the enemy of the A6M5 otsu's location.

The 7.7 mm machine gun's belts have little impact in comparison to the other armaments on the A6M5 otsu, but if a choice must be made, the stealth belts are a good choice as they can still pierce some armour with incendiary rounds.

Overall, the best way to make use of the A6M5 otsu's firepower is to learn how to lead and shoot properly with stealth belts. It allows an awesome advantage of surprise and explosiveness.

The A6M5 otsu can be outfitted with the following ordnance:

Similar to past "Zeroes" the A6M5 otsu is a proficient dogfighter. With a turn time rivalling biplanes this aircraft is more than capable of winning any standard turning fight. It encounters problems at both high speeds and high altitudes, where its foes excel at. Generally speaking, the A6M5 otsu is best utilized as a low-altitude low-speed dogfighter. It can be a great addition to a team especially if paired with higher speed Japanese aircraft such as the Ki-61 or J2M3. When flying the A6M5 otsu, remember to keep your speed low and to never engage in head-on attacks. Although the aircraft has a 45 mm armoured glass plate in the windscreen, its main armament is not centrally located in the nose and thus will be at a significant disadvantage. "Bait" enemies by making them think they have a successful shot on you and then dart away to a lower altitude. This will most often result in either kind of scissors or a standard turn fight, where the A6M5 otsu excels. Once able to be destroyed, get as close as possible to the enemy aircraft and fire in short bursts. This way, ammunition will be conserved and the enemy surely destroyed. Be careful not to go too fast, as the A6M5 otsu's control surfaces lock up making it incredibly difficult to manoeuvre.

Although the A6M5 otsu is a fantastic fighter as far as manoeuvrability goes, its speed is not on par with the enemy aircraft it faces. Both the P-51 and the F4U can outrun the A6M5 otsu. In a situation where one is being Boom & Zoomed (enemy aircraft is using superior speed and dive attacks) call upon teammates for assistance. There is little an A6M5 otsu pilot can do against an enemy with superior speed. The A6M5 otsu is best used as a support aircraft as it is generally unable to destroy some of the aircraft it faces. Staying with other teammates is a sure tactic and will net the best results. A "Zero" pilot must always recognize the need for teamwork and communication. One can also play the A6M5 series as a light boom and zoom aircraft, using the climb rate to get above the competition, and the improved dive capabilities over the M2/3s to swoop down onto enemies from above, but be mindful of the aircraft's speed.

Playing the A6M5 otsu in realistic battles will allow players to easily exploit the aircraft's turn time against its opponents.

The A6M5 Otsu was a modification of the earlier A6M5 series. It utilized the A6M5 Ko's Type 99 Model 2 cannon modification as well as thicker wing skinning, allowing for higher dive speeds. The A6M5 Otsu was the first variant of the A6M series to utilize armour protection. It was produced from April 1944 through October 1944. 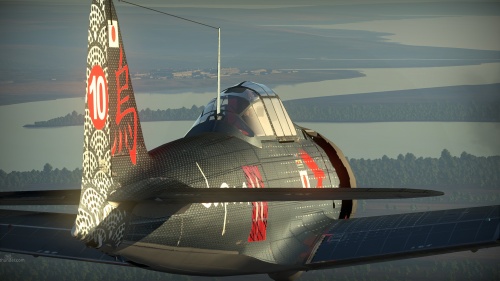