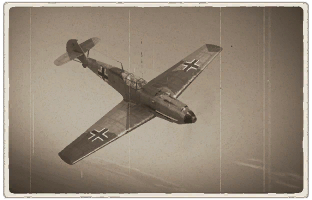 The Bf 109 E-1 will most likely not be an immediate success for new players. While sporting a very respectable climb rate and good acceleration over its historic counterparts, the Bf 109 E-1 is not an easy plane to fly. That said, its light weight in relation to its engine performance allows the player to wield a pure-breed energy-fighter. However, it is lacking in two regards that often make it hard for new players to perform well in. First, while the Emil does have a good turn, its main historic enemies either turn equally well or better. Second, its armament (four MG 17 7.92 mm, 3,000 rounds) is usually insufficient to reliably dispatch enemies in a quick burst.

That being said, learning how to do well in the E-1 (and later E-3) will pay great dividends to the player in the long run. Alongside its main strength of a good power-to-weight ratio, the Bf 109 E sports a good roll rate, allowing for excellent manoeuvrability. This helps the plane during manoeuvres of all kinds, both in defensive or offensive situations. With this, a seasoned pilot will be able to get on the six of even the tightest turning Spitfire long enough to get their shots in. However, do not overextend for the latter, lest you end up with no speed to escape with.

There is no armour protection on the Bf 109 E-1, and the fuel tank is not self-sealing. The fuel tank is located behind the pilot's seat. The engine and cooling systems are located in the nose of the plane. This layout allows the pilot some protection, but the lack of real armour still leaves the pilot vulnerable.

Of the four machine guns, two are mounted in the upper nose section just in front of the pilot, each armed with 1,000 rpg. The other two machine guns are mounted with one in each wing with a total of 500 rpg.

The Bf 109 E-1 can be outfitted with the following ordnance:

When fighting in the Bf 109, the player needs to understand the concept of energy and maintain energy superiority over their foe at all times, while also keeping an eye on their surroundings and incoming bandits. To do this, use speed and altitude to your advantage, constantly shifting between the two in a fight. This calls for discipline on the side of the pilot, as you will often be tempted to bleed away speed or forgo attempts at gaining back altitude in hopes for a few more shots on targets. As your experience with the Emil grows, you will be able to more reliably judge when you can bleed speed/forsake altitude to obtain a positional advantage and when not to, but newer players with a too gung-ho attitude often get themselves into more trouble than they can handle.

Sadly, the E-1, with its limited armament, will often take too long to dispatch an enemy and thus prove unrewarding to one's efforts. Four 7.92 mm machine guns are mounted on this plane, providing a very different experience from Messerschmitt fighters in the game that follow it. The centre-mounted guns hold 1,000 rounds each, while the wings hold 500 each. This means that after some shooting, your effective firepower is halved. The 7.92 mm can be effective against enemy fighters when the pilot is accustomed to them, but they require certain patience to handle. Once accustomed to the ballistics, the player can opt to use stealth ammunition belts. This will ensure that the target moves less while being shot at (especially since the lower tiers have many new pilots), providing better and longer opportunities for shots. Also, the 7.92mm bullets that the E-1 fires when using stealth belts are slightly visible, facilitating target adjustment while still being inconspicuous to the prey.

At engaging large and/or armoured targets such as bombers, the E-1's guns struggle hard. On bombers, specifically, aim for the engines and fuel tanks. The ammunition might not destroy the plane itself, but knocking out an engine or two helps other fighters with heavier armament and can also cause the plane to crash and attribute you the kill. That said, if done well and left alone, the E-1 will stitch an enemy to death in many well-timed and executed attacks, which makes for a fulfilling experience. If you happen to mess up, extend from the bandit going into a very slight dive to help acceleration. Unless they are right on you, this allows you to gain distance and sets up a nice climbing match in which the Bf 109 E holds all the cards (unless it is facing enemies of later years). Diving away straight down can be done as a last resort but usually leads to you wasting way too much altitude.

New players should adopt a hit and run tactic with the Bf 109s (also known as Boom and Run). While often called a Boom and Zoom aircraft, the 109s are not dedicated Boom & Zoomers, and many other aircraft such as the Fw 190 do it much better. That said, the 109s do build up speed quickly in a dive, and they have a respectable zoom climb that ends in a strongly sustained climb at ~ 270 km/h (optimal climbing speed 260, and dash 280 km/h). Doing so will often give the player the maximum speed or altitude advantage they can have over their chosen target. A straight-up bounce, with a short extension from the target and a slowly increasing climb leading into an Immelmann, tends to work best for rookie pilots. Remember to check your six and surroundings during the climb and just before diving back on your target.

Spitfire- the great nemesis: Fast, agile and with a powerful punch. This recurrent enemy will change its traits in its development, but even in this early era, the Spitfire possesses them. The Spitfire Mk.I and Mk.II is on par in top speed above 2,000 m, but near sea-level, the E-series has 20 km/h more speed. Further, the 109 can get to these top speeds faster, due to its superior power-to-weight ratio. The latter also allows it to duel the Spitfire in defensive dogfights. In extended manoeuvres, the Spitfire can run out of energy, which the Bf 109 E-1 has fewer issues in regaining. Getting there can be done via scissoring, where the Emil also benefits from its far better roll rate. Yet at these close to stall speed dogfights (~230 km/h), the Spitfire can more easily pull high angle of attack manoeuvres, as it stalls way later than the 109. An alternative defensive manoeuvre is a spiral climb, followed up by a rope-a-dope, although this is only executable in Simulator.

The late LaGG-3s (35 and 66 series) are a serious threat featuring many of the Bf 109 traits, including top speed, climb rate and manoeuvrability. For defensive manoeuvres, scissoring is one of the few options. In Simulator, the chance of throwing off the opponent by making them lose the sight of you is hard, as the LaGG has great frontal cockpit visibility but a bad rear view, coincidentally like the Bf 109 E-1. Early LaGG-3s such as the 8 and 11 series are much easier to deal with. They are equal in manoeuvrability, but their engine performance is sub-par in every regard. Out-climbing or simply out-running after breaking off in scissors can help rid this pursuer. However, it can be hard to distinguish the different LaGG-3 series, especially in game modes without HUD.

The MiG-3 is a high-altitude fighter. Do not fight it above 5,000 m. It lacks manoeuvrability but possesses great top speed and good energy retention at altitude.

The Yak-1B and Yak-7B are generally superior to the Emil series in turning and low altitude speed. The Yak-1 is around equal in performance. 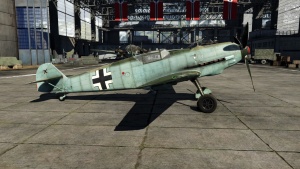 The Bf 109 E-1 is essentially the first 'modern' 109. While the Bf 109's earlier models (V [Prototype], A, B, C) were tested during the Spanish Civil War and developed out of the experiences made in that conflict, it took a few more years for it to develop into a true front-line fighter. The E-1 was the first of a new breed of Bf 109 fighters. Entering production in late 1938, the "Emil" quickly replaced its earlier brethren in service with the Luftwaffe. The distinctive chin radiator of the Jumo powered variants was replaced with two much subtler underwing-mounted versions integrated with flaps, and the cowling was redesigned to carry the Daimler-Benz 601 series of engines. The result was a much more aerodynamically efficient aircraft that was more than a match for the new Supermarine Spitfire that was entering service with the RAF around the same time the first Emils were rolling off the production lines. The Bf 109 E-1 was also sent into action with the Condor Legion in the Spanish Civil War during its twilight stages.

Entering service in 1939, the E-1 would see combat in the early phases of WW2, quickly obtaining aerial supremacy over the skies of Europe. The Bf 109 E was able to outclass many of the standard fighters of the day and was a key component of the German Blitzkrieg tactics that dominated the early years of WW2. A small run of E-1B Jagdbomber versions were also created, capable of mounting up to 250 kg of bombs on a centreline pylon. The Bf 109 "Emil" would finally meet its match in the RAF's Hawker Hurricane and Supermarine Spitfire fighters that intercepted German formations during the Battle of Britain (where its limited fuel supply restricted combat effectiveness). By the beginning of the Battle, the Bf 109 E-1 was already being replaced or upgraded to the E-3 MG FF cannon armed variant and improved E-4; however, some E-1's would still see combat before the end of the year. After the Battle of Britain's conclusion, the "Emil" series would ultimately lead to another major variant, the Bf 109 F or "Friedrich" that would form the basis of all following Bf 109s.