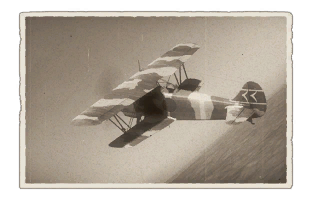 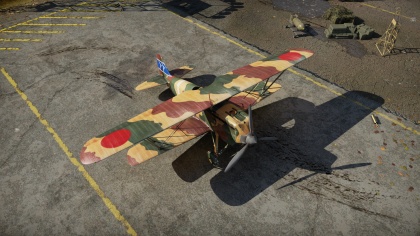 The Ki-10-II C is a gift rank I Japanese biplane fighter with a battle rating of 1.0 (AB/RB/SB). It was in the game since the start of the Open Beta Test prior to Update 1.29. The Ki-10-II C is no longer acquirable in the game but is retained by those who have obtained it before its removal.

The Ki-10-II C is a biplane fighter for Rank 1 Japan. Like most biplanes, the KI-10-II C has a low top speed, good turn rate, good-to-fair climbing ability, nearly no armour, and, in realistic and simulator battles, a ridiculously short take-off length. Compared to other biplanes, the Ki-10-II C is faster and climbs far better, but in turn, has inferior armament and armour.

The Ki-10-II C's low speed and tight turning ability make it a great turn-fighter, like most Japanese light fighters. The Ki-10 excels at low and slow turn fighting at very low altitudes where enemies cannot out-dive it. Additionally, it has a climb rate to climb away from enemy biplanes. Very fast dives should be avoided, as the wings will shear off at very high speeds. Similarly, turning stalls should be avoided, as the Ki-10 has a tendency to enter uncontrollable spins.

It's twin 7.7 mm armament is the weakest in the game, as it has a lower fire rate than its contemporaries, the ShKAS, Browning, and MG 17. The belts are poor as well; stealth is most recommended, as it has the most AP-derivative shells. Strafing attacks on all but the least armoured targets are not recommended; Artillery, Vehicles, and Landing Craft are good and soft targets, while the Ki-10-II C's weak construction makes attacking AAA and bombers risky. All bombers are pretty much invulnerable to the Ki-10 (SB 2, Do 17, etc.) unless a lucky round knocks out the pilot. Cargo Ships, Tanks and pillboxes are also invulnerable to the Ki-10-II C. Instead, the best Ki-10 targets are other biplanes or slow monoplanes, such as P-26s, Furies and Nimrods. Aim for the wings! The fuselages of all planes will absorb the Ki-10's shells like a sponge. Like most other planes, the Ki-10-II C works best in numbers. Ki-10 pilots should focus primary on sticking together and working as a team.

The 2 x Type 89s are the absolute worst pair of guns in the game. They have little incendiary ability, unlike the Browning 7.62 mm/12.7 mm, and have a low fire-rate in comparison to the MG 17. The Ki-10-II C will not provide rapid victories; it takes much skill to master the Ki-10's firepower. Beginner players will not appreciate the Ki-10 at all.

Always aim for wings of opponents. A wing will simply fall off after unloading 500 rounds into it. If lucky, the Ki-10 can get away with ripping off an enemy wing after about a 5-8 second burst. Pilot shots are viable as well but require a significant amount of discipline and skill. Remember that the Type 89 also tends to overheat quickly, though slower than the ShKAS. Always use the Stealth belt, its efficiency is superior to any tracer-equipped belts.

When in a monoplane (except the P-26 Peashooter) and flying against the Ki-10-IIC, use superior speed and climb rate to outdistance it and apply Boom & Zoom tactics. Do not turn fight with the Ki-10-IIC because of its superior turn fighting ability.

The Kawasaki Ki-10 was the last Biplane fighter used by the Japanese Army. Introduced in 1935, it beat the competing Nakijima K-11 (which would later be refined as the Ki-27) as the Imperial Japanese Army Air Force placed more priority on manoeuvrability than speed. Its excellent manoeuvrability made it extremely popular with Japanese pilots, who demanded similar high manoeuvrability from newer aircraft. Over the course of its service, the fighter would be refined several times with the ultimate version, the Ki-10-II, appearing in 1937.

The K-10 saw service against Chinese air forces in the early stages of the Second Sino-Japanese War and against Soviet air forces during the battles of Khalkhin Gol (where it historically outperformed the Soviet I-15). It formed the backbone of the IJAAF fighter forces until 1940, but it was considered obsolete by Western military experts as early as 1938. By the start of the Pacific War, the Ki-10 had been regulated to training and courier roles, and received the Allied reporting name "Perry".

There are no known incidents where the Ki-10 engaged American- or British-crewed aircraft, though the Japanese fighter did fight Chinese National P-26s, and may have engaged British-built Gladiators, Italian CR.32s (predecessor of the CR.42), and Soviet I-15's, all crewed by Chinese pilots, during the early battles of the war.

The first Ki-10 production fighters began to enter service in December 1935. Military pilots highly appreciated the new fighter's speed and rate of climb. However, Kawasaki soon began to get non-stop requests from troops asking them to improve the machine's horizontal manoeuvrability The predominant opinion in the Japanese aviation industry of that time period was that fighters should first of all meet the requirements of high manoeuvrability for the close-range combats (""dog fights"") of World War I. In addition, the Ki-10 was noted to have inadequate longitudinal stability that made accurate aiming and firing more difficult.

In response to these complaints, Takeo Doi presented a new version of the fighter, designated the Ki-10-II, in October 1937.

The new plane had its upper wing span increased to improve manoeuvrability, which resulted in decreased wing load. Also, the tail section of the fuselage was lengthened to extend the empennage, which made the plane more stable.

The designers managed to compensate completely for the increased drag after the plane's production standards were raised and, in particular, the airframe's surface was given a smoother finish. As a result, the Ki-10's manoeuvrability and takeoff/landing characteristics were noticeably improved, even though the plane retained the same engine and other flight performance parameters remained unchanged.

290 Ki-10-II fighters left the Kawasaki factory floor (located in the city of Gifu) during production, up until December 1938, when the machine's production ceased.

The Ki-10-I and the Ki-10-II became the most advanced biplane fighters in Japanese aviation. They took active part in combat operations in the Sino-Japanese War and in the Khalkhyn Gol conflict. Ki-10 aircraft became obsolete by the beginning of the Pacific War, and were mainly used as training machines.

In 1939, a practically undamaged Ki-10-II fighter was captured by the Chinese. This aircraft later appeared in the USSR. The machine was thoroughly studied there, and flight tests were even conducted at the Air Force Research Institute.

Soviet test pilots noted that the Japanese fighter had high production standards and was easy to operate and maintain. It was not difficult to pilot, but its stability was considered inadequate, and its spin characteristics were believed to be poor.

But in general, despite a number of disadvantages, the Ki-10-II was regarded as a very strong air-combat opponent which could fight Soviet I-15 fighters on an equal footing.