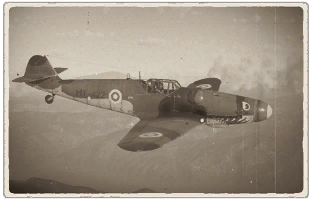 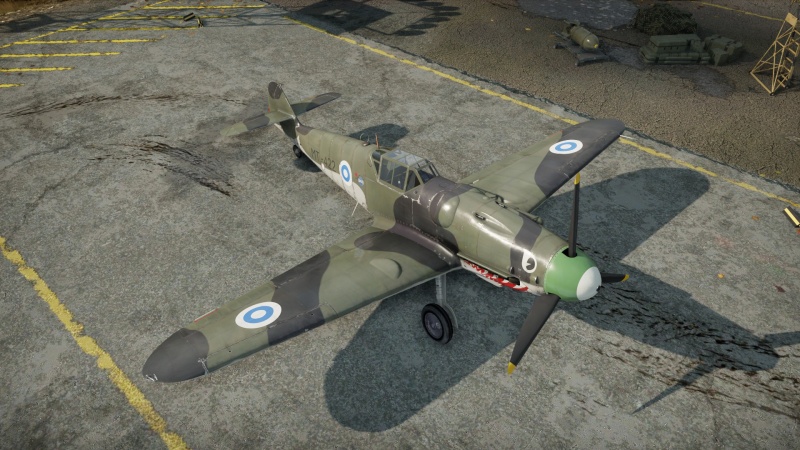 The Finnish Messerschmitt is one of the 159 units of German Bf 109s that arrived for the Finnish air force to use during the Continuation War; out of those 159 units, 109 were G-6 models. The model in-game carries the designation number MT-422.

MT-422 was one of postwar serving Bf 109G-6s. Shark mouth artwork was created and painted on MT-422 by Sergeant Börje Hielm. According to him the mouth was short lived as his CO ordered it to be removed later that year.

The performance is virtually identical to the Bf 109 G-6 in the German tech tree; the difference between the two is that the Finnish G-6 has a tropical air filter and a Finnish paintjob. These differences do not affect the performance, they are purely visual.

The Bf 109 G-6 (Sweden) can be outfitted with the following ordnance:

An altitude advantage is imperative in the G-6, no matter what the enemy is. WEP is very effective, and with radiator and oil radiator management overheating is fairly negligible and takes a long time. The engine also cools down very quickly when disengaging WEP.

When it comes to armament you have the choice of a 20 or 30 mm cannon in the engine, and gun pods of the same calibre. The 20 mm gun has good gun characteristics with decent damage and a good ammo count, while the 30 mm deals devastating damage but has a low ammo capacity and a very slow shell velocity.

In Simulator, the Bf 109 G-6 is quite a friendly fighter that can perform many tasks. It offers great flight performance with its smooth handling, adequate speed, and impressive climb rate and turn rate. Its nose-mounted guns do not require any convergence setting, making it very easy to aim. The nose gently slopes down from the windscreen, offering great over-the-nose visibility. The late G models also have an improved canopy side with less frames, and the solid armour headset is replaced by a transparent bulletproof glass, allowing some rear views which is better over the F models. Said bulletproof glass, however, has a thick metal frame, thus you can only see through the middle at a small portion of the tail. Still this is better than not being able to see anything behind at all. There are bombs of 50 kg and 250 kg to choose from which are beneficial for ground-pounding or base-bombing, although these are not its primary objectives. However, the Bf 109 G does have pretty limited cockpit view obstructed by its numerous canopy frames and handles. The inclusion of two 13mm MG131 creates two large, visible bulges on the nose, just in front of the windscreen, obstructing the pilot's downward view. The plane also behaves poorly during takeoffs due to its torquey engine.

The Bf 109 G-6 excels in bomber hunting: arming the aircraft with the single 30 mm, dual 13 mm, and dual 20 mm gunpods allows the aircraft to very quickly deal devastating damage to enemy bombers. In this preset the 109 can be considered a heavy fighter with fantastic performance, though turn fighting is somewhat out of the question. Boom 'n' zooming enemy fighters with this heavy armament is also very effective as only a couple of hits from the Mk 108 or MG 151s will completely cripple or outright destroy any single engined fighter.

The aircraft, despite having coolant in the wings, is also very durable for a single-engined fighter and is armoured very well. The fuselage, wings and tail assembly can take an enormous amount of punishment whilst staying in one piece to get you back to a friendly airfield. This characteristic adds to the bomber hunting capability, as it will be able to soak up a fair number of rounds from even relatively heavy defensive fire. However, flight performance is significantly reduced when damaged. Any damage to the water coolant system is fairly serious and will cause the engine to overheat and die fairly quickly, so an immediate disengagement is recommended in this situation.

The Bf 109 handles very sluggishly in the roll axis at low speed, so take this into account if dogfighting at low speed/altitude. You can even pull the elevator fully for maximum agility, but only if you pull gently and gradually will the 109 manoeuvre as you wish. If the stick is pulled harshly and suddenly, the plane will start swaying around and enter a flat spin. The 109 has very favourable characteristics in terms of getting out of a flat spin, and often corrects itself. If not, cut throttle, opposite rudder, stick forward and neutral ailerons.

Your worst enemies in the Bf-109 G-6 are the Spitfires and the P-47D/N/M Thunderbolts. The Spitfire can out-turn you at almost all altitudes below 4,000 meters. You have to be really careful when engaging a P-47 with an altitude advantage against you. The best thing you can do in that case is to turn away and keep climbing. If the Thunderbolt dives on you, turn into the head-on, fire a few rounds then use your superior roll rate to do a split-S. If a Spitfire engages you DO NOT try to turn with it! If you try, you will have fallen into their trap, your best defence is similar to the tactics employed against the Thunderbolt, split-S and use your roll