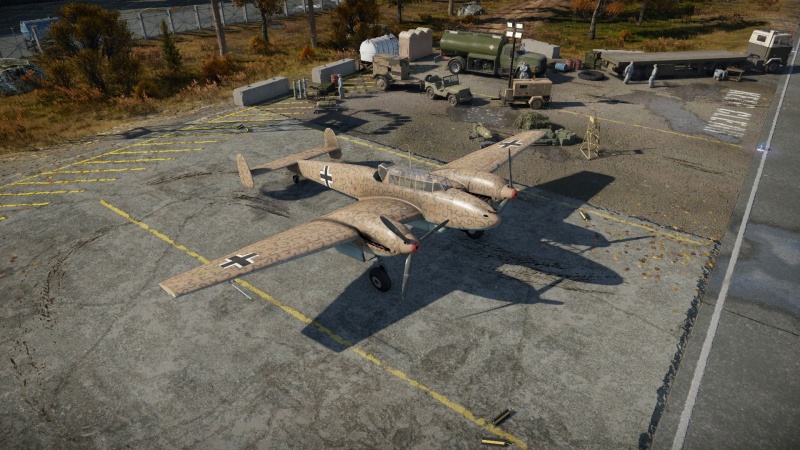 The Bf 110 C-6 is a premium gift rank II German strike aircraft with a battle rating of 3.0 (AB/RB/SB). It was introduced in the Operation H.E.A.T event during Update 1.89 "Imperial Navy". It is a rare vehicle and can be obtained through the Gaijin Marketplace.

The Bf 110 C-6 is best suited at ground attack and bomber interception roles. The 30 mm chin-mounted cannon can load both HVAP and HE rounds giving it flexibility in both Air RB and Ground RB. The Bf 110 C-6 can intercept bombers, destroy tanks and pillboxes with its 30 mm cannon but struggles in dogfights with fighters unless it had the altitude/energy advantage. The lack of 20 mm cannons leaves the C-6 nothing to fall back on except four machine guns. The C-6 is a great ground attacker in ground battles as the 30 mm cannon can penetrate most tanks at its rank.

The Bf 110 C-6 is a twin-engine heavy attack aircraft developed according to a special programme whose objective was to outfit the Bf 110 fighters with a heavy cannon armament. This modification came into existence in the spring of 1939. The aircraft was designed to be equipped with a 30 mm MK 101 cannon, while its standard-issue 20 mm cannons were dismantled for the purposes of reducing the weight and increasing fuselage space. A series of issues concerning the manufacturing of the MK 101 cannons led to the postponement of the project, but in the summer of 1940, the German government placed an order to assemble a test batch consisting of 12 C-6 aircraft. All the fighters in this batch were deployed in the Battle of France as anti-tank aircraft, as well as in the Battle of Britain to combat enemy ships and destroy enemy radars.