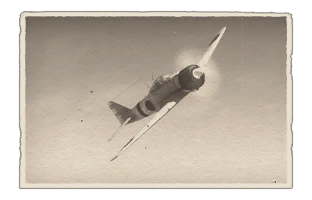 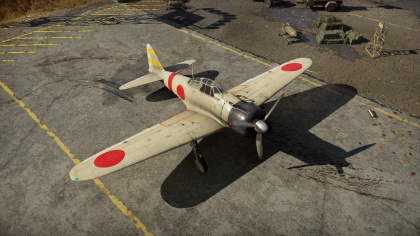 One thing many players note when fighting the Zero is its immense manoeuvrability and turn rate. It is incredibly nimble and has an amazing climb rate, which allows you to run literal rings around many opponents. Even fighters renowned for manoeuvrability, like the mighty Spitfire, will think twice before engaging in a turn fight with the Zero. A deadly addition of two 20 mm cannons and two 7.7 mm machine guns mean that you can compete with other fighters.

Force an enemy pilot into a dogfight at 370 - 400 km/h and below 6,000 meters. At this speed and altitude, no enemy fighter can out-manoeuvre or out-climb you. Jump on cruising enemy aircraft from above, fasten onto the tail of the bandit, use your superior manoeuvrability to match his evasive moves, and put enough rounds into him to bring him down. Use your machine guns first to "bore-sight" the enemy - once you get hits on him, finish him off with your cannons. Below 480 km/h, you can fling the Zero all over the sky to get on an enemy's tail or to shake off all but the most determined attacker. Climb away from most enemy aircraft, hanging on your prop in a near-vertical climb. Manoeuvres like the Immelmann are easy, and heavier fighters can't stay with you. The Zero rolls faster to the left than to the right. Roll left to tighten your turn and get onto the enemy's six. Don't dive away from attackers - your plane doesn't have the power or weight to out-run most fighters. To exploit your plane's best performance, force the enemy lower and slow down the pace of the engagement.

The A6M2 can be outfitted with the following ordnance:

The A6M2 Reisen is a very manoeuvrable plane, so note that when battling it, do not engage in low manoeuvres. Try to force it into high-speed manoeuvres, as it's prone to ripping/compressing at high speeds. Apply boom and zoom tactics on this plane as it will be easily cornered.

This single-seater carrier-based fighter was designed to replace the aging A5M. To reduce its weight, duralumin was widely used, and its propeller was made of a lightweight aluminum alloy. The A6M2 did not have high survivability due to its lack of armor and self-sealing fuel tanks, but in the first half of World War II, it had a considerable advantage in maneuverability and speed when compared to the Allies (which had nothing to oppose the Zero until the arrival of aircraft such as the F4U and F6F).

The first prototype of this series, the A6M1, first flew on April 1, 1939. During the test, a more powerful engine was proposed, and the Mitsubishi Zuisei 13 (780 hp) was replaced with the Nakajima Sakae 12 (940 hp). After a successful test flight, the new engine was adopted for serial production and the plane was designated the A6M2 Model 11. Its main drawback was that it could not be used on aircraft carriers due to its large wingspan, which was not designed for carrier-based operations. To circumvent this limitation, the A6M2 model 21 was designed with folding 500 mm wing panels.

The Zero had no equal in the sky until the end of 1942, and even when it was finally made obsolete, its production continued until the end of the war, making it the most popular fighter in Japan. Like many other Japanese aircraft, the Zero was used in the last months of the war to attack bombers.

Skin and Camouflages for the A6M2 in Warthunder Live.