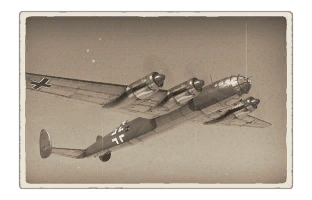 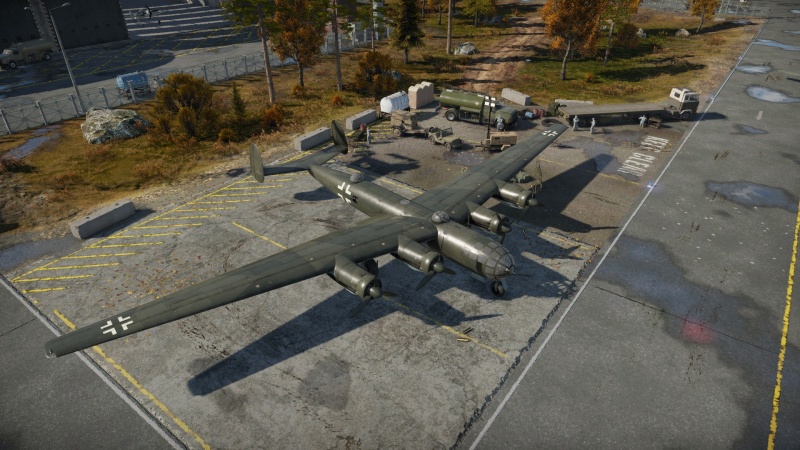 The first thing the player will notice is the plane's similarity to the famed B-29, as it shares a similarly designed fuselage and glazed nose, but a different twin tail instead of the large single tail on the B-29. Despite being a heavy bomber, the Me 264 is quite responsive and manoeuvrable. However, you are still a heavy bomber and you shouldn't try to turn with anyone. It is also quite speedy for its rank and classification, able to out-speed some of the planes at its BR when at altitude. In addition to its powerful engines, the Me 264 is equipped with rocket boosters that provide additional thrust for a short time. The keybind to activate the feature can be set in Controls > Aircraft > Mechanization > Ignite boosters.

Despite not being well armoured, the Me 264 Amerikabomber can take quite a beating and has a knack for surviving fires. Due to its four engines, it can lose one or two and still make it back to base for repairs. However, it is one of the largest planes in the game and thus is impossible to miss, so while you can take a lot of damage, you will be receiving a lot as well.

Although it doesn't have a lot of armour, it has the guns to make up for it. With 3 x MG 151/20's that have access to the dreaded Minengeschoß high-explosive incendiary round complemented by another 3 x MG 131 heavy machine guns, as a few well-placed shots will make short work of any attacker that recklessly tails you.

The stock payload is quite poor, so pick up the ETC 500/II modification first, followed by the 20 mm belts to add more Minengeschoß rounds, then the ETC 1000/I and ETC 1800. The rest of the modules are up to you, but survivability modules are recommended to withstand the beating you will be getting.

With a massive 4,000 kg payload, the Me 264 has the second-best payload of any non-premium German bomber and one of the best payloads at its battle rating. Ideally, you should use the 2 x 1,800 kg bombs + 3 x 250 kg bombs for destroying bases, as in Arcade Battles this payload can destroy a base in one pass (or get close depending on if you up-tier it) and in Realistic Battles, the 4 x 1,000 kg bombs, as each can just barely destroy a base. It is also good for ground pounding.

For the mixed bomb loads, the rule of thumb is that the heaviest bombs drop first and the lighter 250 kg bombs drop last.

Due to the Me 264's painfully slow turning circle, fly for a bit before turning around in case you miss a base. Turning around prematurely can result in the base being missed once again. Once you have expended all your bombs, reduce throttle to 0-20% and gradually descend towards your airfield. Unlike other German bombers of this rank, its wings are surprisingly tolerant of higher speeds but it is still important to monitor speeds to avoid overload.

Notable enemies include any heavily armed interceptor that has at least semi-decent performance, but notably the P-61, P-38J, Mosquito and the P-47Ds, as all of these planes can climb to your altitude and destroy you with their heavy armament.

The Mosquito is a sort of push-pull. While you can down it easily due to its wooden construction, it can do the same to you with its quad Hispano Mk.II's. Aim for a centre mass near the cockpit, as this is the most vulnerable area or aim for the wings where the fuel tanks are stored and can cause fires.

High-Altitude Strategic Bomber - The role the 264 was designed for, and the role it excels the most at. Firstly climb to altitude, anywhere from 6-7 km and then maintain that altitude through a level flight and gain some speed, as would-be attackers will struggle to catch you by keeping a constant speed of 400-435 km/h or 250-270 mph. Make your way towards the bases and drop your bombs.

Gunship - While being significantly more dangerous to the player, the "Gunship" playstyle is infinitely more fun. It is only recommended to use this playstyle when the plane is spaded. Stay relatively low to the ground and attack ground troops, and if any player comes to attack you, focus your guns on them and let them tail you. The main bonus for flying in this way is that your extremely vulnerable belly is covered, preventing anybody from attacking you from there. The only reason this playstyle is viable is that the lower rank players you will encounter are more likely to make mistakes such as tailing you, allowing you to shoot them down for points.

Bomber Hunter - Climb to meet enemy bombers at high-altitude. While the enemy bombers will acknowledge the Me 264, they will rarely react against the Me 264 aside from keeping some air space. Deny their evasive manoeuvres and close-in to the enemy bombers. Once in range, use the 20 mm HEI-T belts and attack the enemy. Attempt to approach the target to make use of as many turrets as possible at a time for a quick end to the engagement. If the bomber's defensive is formidable, try to enter and exit the engagement as fast as possible to avoid significant damage to the Me 264.

Never tail a Me 264. Tailing a 264 is basically suicide unless all of their gunners are knocked out. You can treat the 264 almost like a B-29 or B-17 as the planes are very similar in both design and defensive capabilities. It is best to head-on the bomber if you can as you can easily knock out the pilots due to its glazed nose while also taking minimal damage. However, the bomber lacks a ventral turret on its belly, making it easy to deal damage from below, but be wary of the downwards facing rear 20 mm cannon near the tail. When at a higher altitude, it is best to make a dive from an oblique angle and focus fire on the wings and nose.