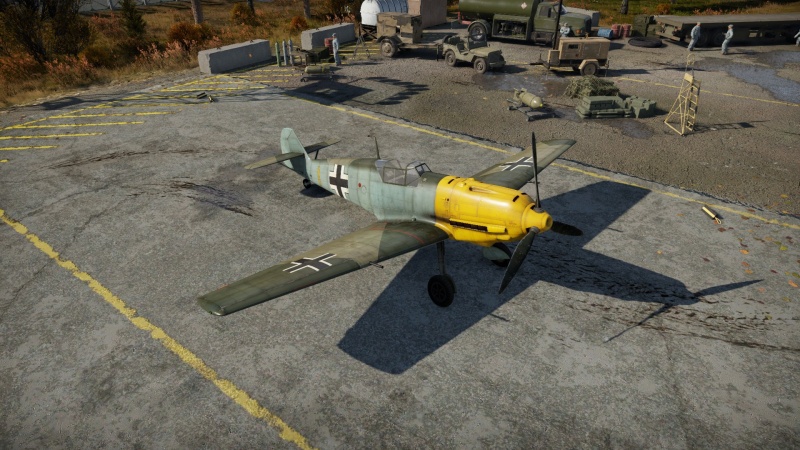 After having experienced the Bf 109 E-1, players will rejoice upon unlocking the E-3. While essentially the same plane, the E-3 overcomes the inadequate firepower (compared to other aircraft of similar BR) of the E-1. With two wing-mounted 20 mm MG FF cannons, the plane packs a deadly punch. Players that did well in the E-1 and learned their Bf 109 trade will be able to make great use of their new Emil. Fighting in the E-3 is essentially the same in the E-1 with the difference that a pilot can now actually reliably dispatch enemies in a short burst.

Remaining a great energy fighter against its historical opposition, the E-3 is somewhat troubled by the fact that it often faces mid-to-late-war planes such as the P-47D. To engage these, make sure to have a clear energy advantage: if attacked, fly defensively and attempt to bleed the enemy's speed while pulling them down. The Bf 109 E-3 is often regarded as a poor turner, a reputation coming out of the fact that its main rival, the Spitfire, simply did it better. However, with combat flaps, the E-3 is a respectable turner able to out-manoeuvre most planes that outperform it in firepower or other factors.

The 20 mm MG FF cannons can not fire Minengeschoss shells. These shells have thin cases, allowing more incendiary material to be used. however, these very same characteristics prevent these shells from being fired from older MG FF versions like the E-3 sports. This means that the E-3's cannons compare poorly with the later MG FF/Ms.

Just as the with the E-1, new players should adopt a hit-and-run tactic with the Bf 109s (also known as Boom-and-Run). While often called a Boom & Zoom aircraft, the Bf 109s are not dedicated Boom & Zoomers, and many other aircraft such as the Fw 190 do it much better. While it is true that a pure Boom and Zooming approach can be used for the Bf 109s, limiting oneself to this enormously undermines the plane's efficiency. That said, the Bf 109s do build up speed quickly in a dive, and they have a respectable zoom climb that ends in a strongly sustained climb at ~270 km/h (optimal climbing speed 260, and dash 280 km/h). Doing so will often give the player the maximum speed or altitude advantage they can have over their chosen target. A straight-up bounce, with a short extend from the target and a slowly increasing climb leading into an Immelmann, tends to work best for rookie pilots. Remember to check your six and surroundings during the climb and just before diving back onto the target. Don't forget to try and gain altitude but only up to 3,000 m is recommended but 4,000 m is the limit as anything higher will cause you controls to stiffen and "buckle out" meaning turn rate will get considerably slow and bombers at that altitude will be able to easily outrun you.

When firing at enemies, be aware that the 20 mm cannons only hold a 60-round drum magazine each. They empty quick, and many a new pilot has seen themselves on pitifully low ammunition after only one attack run. Once the cannons are empty, the E-3 will be hard-pressed to destroy any aircraft. Do not waste the cannon ammunition on ground targets and when firing at planes, fire in short, controlled, and well-aimed bursts. Luckily, the E-3 holds 1,000 rounds in each of its two MG 17s. Use these if inclined to spray and pray or are about to engage ground targets.

In Simulator, the Bf 109 E-3 is quite a friendly fighter that can perform many tasks. It offers great flight performance with its smooth handling, adequate speed, and impressive climb rate and turn rate. The nose gently slopes down from the windscreen, offering great over-the-nose vision. Despite having a razorback, the Emils actually have great visibility towards the tail, increasing the pilot's situational awareness. There are also a few bomb options to choose from which are beneficial for ground-pounding or base-bombing, although these are not its primary objectives. However, the E models have their cannons mounted on the wings which is not very friendly to aim, and each cannon only has a poor 60-round drum as mentioned above.

You can bring the least fuel amount, since the 60-round drums run out fast, making you constantly return to base to rearm so there is no point bringing more fuel. A close gun convergence set at around 250-400 m is recommended, given the low velocity of the cannons. You can also set keys for vertical head movement, as lifting up your head a little helps improving the over-the-nose visibility.

Dogfighting in SB involves everyday RB tactics. Utilise common manoeuvres such as Immelmann, Split-S, scissor, barrel roll, etc. You may want to practice smoothing the aircraft, as the wing guns are quite awkward to aim. To make every shell count, get close and "let the enemy fill up your windscreen". A good distance to open fire is when their wingtips fully fill up the reticule circle. Note: the Bf 109 handles very sluggishly in the roll axis at low speed, so take this into account if dogfighting at low speed/altitude. You can even pull the elevator fully for maximum agility, but only if you pull gently and gradually will the 109 manoeuvre as you wish. If maximum elevator input is harsh and sudden, the plane will start swaying around and enter a flat spin. The aircraft can quite easily recover from a flat spin by fully deflecting elevators downward and rudder to the opposite side of which the plane is spinning, and wait until it starts a dive and gather some speed to pull up. 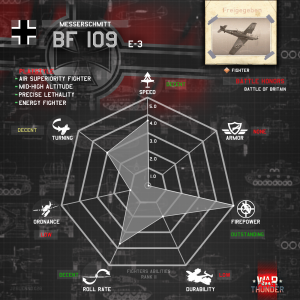