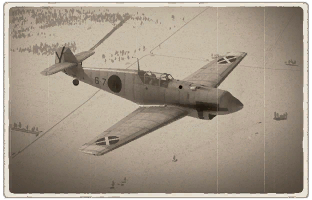 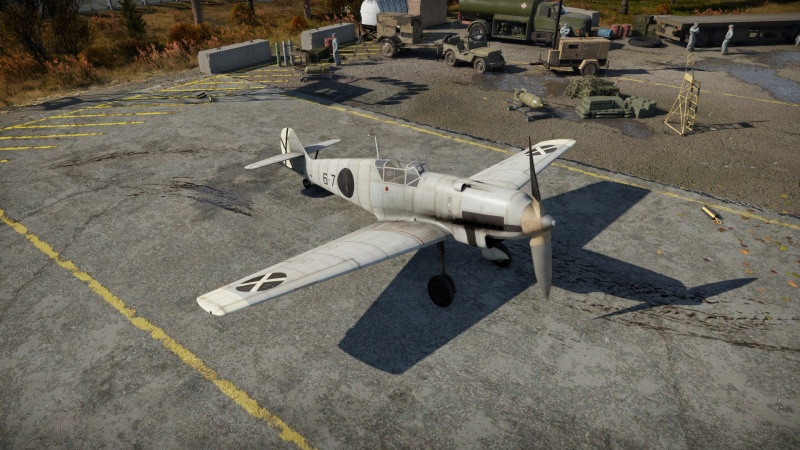 Flegel's Bf 109 A is a premium rank I German fighter with a battle rating of 1.3 (AB/RB/SB). It was introduced in Update 1.69 "Regia Aeronautica". The plane is painted after the camouflage scheme of Luftwaffe pilot Norbert Flegel in the Condor Legion of the Spanish Civil War. While available in-game for purchase with GE

Though capable in engagements against aircraft of similar BR, Flegel's Bf 109 A finds itself lacking in power, handling, and armament. As with later 109s, energy preservation is a must, and this aircraft should be used as a Boom and Zoom fighter against larger targets. This early Bf 109 is a definite collector's vehicle. With a two bladed wooden prop and a distinctive camouflage, this plane's visual looks give it most of its appeal to its owners. With an underwhelming armament of 2 x 7.92 mm MG 17 guns, it will find itself struggling to bring down heavy aircraft.

The two machine guns are arranged with both mounted in the upper fuselage, just in front of the cockpit. Each are armed with the same amount of ammunition, which means that both guns will fire together until empty.

As with the other Bf 109s, Flegel's aircraft should be used as a high-energy fighter. Long turning engagements will almost always result in a loss. Side climb for the first bit of the match until the plane attains at least 2,000 m of altitude and build airspeed before engaging targets.

Keep the plane's speed high and altitude higher. Energy is the aircraft's best friend, as the less than heavy armament will often require the plane to make more than one pass, especially against bombers, to destroy the enemy aircraft.

In Simulator, the Bf 109 A is quite a friendly fighter that fights well. It offers great flight performance with its smooth handling, adequate speed against biplanes, and impressive climb rate and turn rate. Its nose-mounted MGs have plenty of ammo and do not require any convergence setting, making it very easy to aim. The nose gently slopes down from the windscreen, offering great over-the-nose vision. Despite having a razorback, the A model actually has great visibility towards the tail, increasing the pilot's situational awareness. Finally, the engine is not as powerful as the later models, making takeoff easier. However the A model does suffer from poor firepower given by the mere 2 x 7.92 mm MGs. Shooting windows in SB are way smaller than in RB, which reduces its effectiveness even more.

Bring at least 30 minutes of fuel for prolonged patrolling and fighting. The convergence does not really matter, it might be anywhere between 250-600 m. A player can also set keys for vertical head movement, as lifting up the pilot's head a little helps improving the over-the-nose visibility.

Dogfighting in SB involves everyday RB tactics. Utilise common manuevers such as Immelmann, Split-S, scissor, barrel roll, etc. Note: the Bf 109 handles very sluggishly in the roll axis at low speed, so take this into account if dogfighting at low speed/altitude. A pilot can even pull the elevator fully for maximum agility, but only if they pull gently and gradually will the 109 to manoeuvre as one wish. If maximum elevator input is harsh and sudden, the plane will start swaying around and enter a flat spin. The aircraft can quite easily recover from a flat spin by fully deflecting elevators downward and rudder to the opposite side of which the plane is spinning, and wait until it starts a dive and gather some speed to pull up.

Landing may need practice for some. It is easy at first: decelerate and descent towards the runway, deploy combat, takeoff, landing flaps and gears in order, fly at ~190 km/h before touchdown. If the plane bounces up with landing flaps, use takeoff/combat flaps instead to reduce lift. Note that a landing pilot must align the plane with the airstrip correctly prior to touchdown and do not yaw/break one side too much when breaking, as the main landing gears are so close together that they cannot support such sideways force, causing the plane to wobble dangerously or even tilt towards one side, striking a wingtip into the ground.