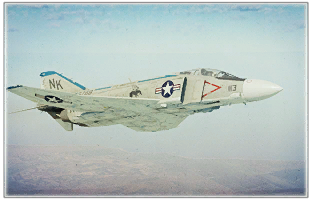 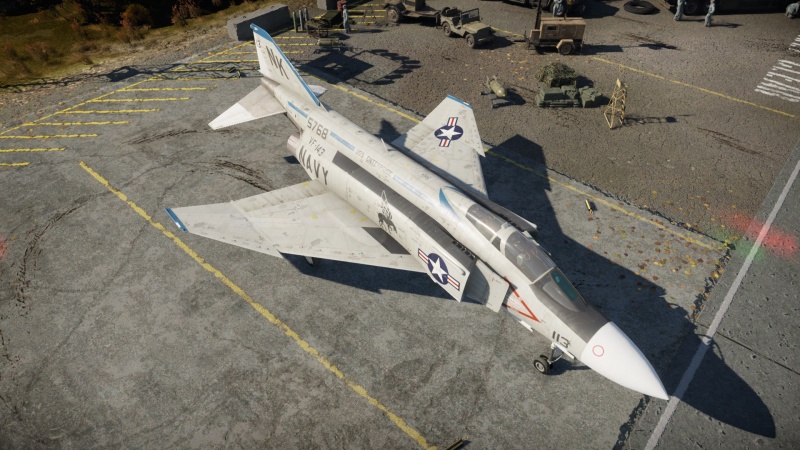 The F-4J is one of the most famous variants of the Phantom used by the US Navy. The external appearance closely resembles the F-4C, only missing the unusable IRST underneath the nose. It is a different aircraft from the F-4E, its US Air Force counterpart: lacking the "Agile Eagle" wing slats and devastating Vulcan Gatling cannon, the F-4J is even less suitable for dogfights. It also does not have the F-4E's lethal ground attack arsenal of air-to-ground missiles and glide bombs. The F-4J makes up for these deficiencies by having a very powerful pulse-Doppler radar, long-range AIM-7F missiles, and a unique VTAS helmet-mounted sight for cueing its AIM-9G Sidewinder missiles. This is a Phantom for pilots who can turn technological superiority into air superiority, and it is good preparation for the succeeding F-14A Tomcat.

The F-4J's flight performance is underwhelming for its battle rating. It has about the same climb rate, top speed, and acceleration as the F-4E, which are good, but the lack of Agile Eagle slats prevents it from turning well even in the short term, and it will lose dogfights to almost every contemporary aircraft. The British FGR.2/FG.1 Phantoms are similar to the F-4J in that they trade wing slats and an internal gun for a pulse-Doppler radar, but their turbofan engines give them much better acceleration in most flight profiles. Thus the F-4J is best played to the typical Phantom strengths of high speed and high altitude, avoiding dogfights whenever possible.

The F-4J has no armour protection whatsoever, which is standard for the battle rating. The airframe itself can take some punishment and the two engines configuration offers some redundancy in case of heavy damage, but the Phantom's large profile makes it easy to be hit by incoming gunfire.

The F-4J Phantom II is armed with:

Like all naval Phantom models, the F-4J lacks an internal gun and is forced to rely on optional gunpods. It does have countermeasures, but they are mounted in compartments on top of the engine nacelles instead of the wing pylon dispensers seen on the F-4E. This system has a capacity of only 60 countermeasures instead of 90, which further emphasizes the need of the F-4J to stay out of trouble.

The F-4J Phantom II can be outfitted with the following ordnance presets:

The F-4J's arsenal does not look as impressive as its air force counterparts. While it does have the large bomb and rocket capacity that the fighter-bomber Phantoms are known for, the F-4J cannot use any guided air-to-ground munitions, not even the basic MCLOS AGM-12C Bullpup available to the F-4C. Thus, it is not very suitable for CAS in Ground RB at a battle rating where it faces long-range radar SAMs and the closest things it has to a standoff capability are firing swarms of Zuni rockets with ballistic computer assistance.

As discussed before, the F-4J does not have an internal gun. Unfortunately, it has the worst gun options of any Phantom: while the F-4C and British Phantoms have Vulcans in their gunpods, the F-4J has a unique double-barrel 20 mm Mk 11 revolver cannon using 20 x 110 mm USN rounds instead. Although it has an impressive rate of fire at 4,000 rounds per minute for a non-rotary weapon (actually faster than the Soviet GSh-23L), this is still inferior to the Vulcan's 6,000 rounds per minute. The gunpod also only weighs slightly less than the podded Vulcan and the performance penalties are still significant.

The AAM arsenal is better and where the F-4J's technology really shines. The stock AIM-9D Sidewinder missiles are decent options. They have a slightly lower overload and acceleration than the Air Force's AIM-9J Sidewinder and have a harder time in dogfights, but the longer burning rocket motor helps it hit targets at extended ranges. The top AIM-9G Sidewinder is largely identical but has an enormous seeker cone that allows the pilot to supply a generous amount of lead. The Sidewinders are assisted by the VTAS helmet-mounted sight, which allows the player to point the missile seeker in the direction of their mouse. The AIM-9G's wide seeker cone makes it easy to acquire targets this way without needing to manoeuvre the lumbering F-4J into a good position.

The real capstone of the F-4J's armament are its radar-guided Sparrow missiles, which greatly enjoy the look-down/shoot-down capabilities offered by its pulse-Doppler radar. The AIM-7E-2 dogfight Sparrows are nice options for medium range engagements because they have a good overload of 25 G, accelerate quickly, and start tracking almost immediately after launch. The new AIM-7F Sparrows are the F-4J's most dangerous weapon. They are heavier Sparrows with an improved rocket motor that burns for a long duration, offering twice the launch range of the AIM-7E-2. The new seeker enjoys a 40 km lock range as well. The AIM-7Fs are excellent for BVR combat and can potentially skewer enemies from across the map if they do not take serious defensive measures. Even at medium ranges, the rocket motor lets the AIM-7F continuously pull quite hard and hit manoeuvring targets. One downside of the AIM-7F is that the long burn duration makes it easy for enemies to spot it, either through the in-game missile warning icon or from seeing the exhaust trail. That said, most targets will notice the RWR warning from the lock first.

Up to four Sparrows can be carried on the fuselage pylons, but what is unique among Phantoms is that the F-4J can carry Sparrows on the inboard wing pylons too (at the cost of the Sidewinders mounted on those pylons), for a grand total of 6.

The F-4J has the best BVR capabilities of any Rank VII Phantom because of its AN/APG-59 pulse-Doppler radar and long-range AIM-7F Sparrow missiles. It pays for this by having the worst performance and dogfight capabilities of any Rank VII Phantom, not even having the reprieve of podded Vulcans and turbofan engines available to the British Phantoms. As such, it's best for the F-4J to identify and destroy targets before they get close enough to enter a dogfight.

One approach is to climb to high altitudes, pick up speed, and look for enemies attempting to do the same thing. The F-4J can often win BVR jousts against contemporary aircraft like the MiG-23MLD because of the range and capacity of the AIM-7F. When high-altitude enemies are dispatched or forced to lower altitudes, the F-4J can use its LD/SD capabilities to snipe targets below. VTAS can also be used to slave the radar to acquire targets more quickly than through the multi-function menu or keyboard binds. However the F-4J can be matched or outclassed in BVR by Rank VIII fighters like the F-4EJ Kai, MiG-29 (with R-27ER specifically), F-16 ADF or MLU, and F-14A. The LD/SD capability is also not perfect and some low-altitude opponents cannot be acquired due to excessive ground clutter or bad luck, so be prepared to have a backup plan.

Another approach is to play the F-4J more like the F-4E and cruise at lower altitudes, maintaining speed and slinging barrages of missiles at foes. Although the pulse-Doppler radar does not help much here, the AIM-7Fs or AIM-7E-2s are still deadly. The AIM-9Gs can be put to good use because their extended range is nice for sneak attacks.

Dogfights should be avoided, but if forced into manoeuvring combat, the HMS can be quite helpful. It can lock Sidewinders onto targets that are not near the F-4J's nose, which compensates somewhat for the aircraft's poor AoA and nose authority. This can surprise enemy fighters who are pulling or rolling hard. However, the AIM-9D/G are still only 18 G missiles and lack the manoeuvrability of something like the 30 G R-60 or 35 G Magic 1, so just because VTAS can lock wild off-bore shots does not mean that the Sidewinder can actually hit them once launched. VTAS will also take some practice to use effectively because it is easy to lock unintended targets like teammates or the sun when looking around with the missile seeker active.

It is often better to leave the gunpod behind because the F-4J needs all the speed and climb performance it can get and the gun does not offer much utility to outweigh its penalties. It is a mistake for the F-4J to get involved in close-range manoeuvring combat where the gun would be useful in the first place and the airframe's poor agility does not lend itself for pulling lead on targets. It is more practical to use the Sparrows in head-ons and use the AIM-9Gs with VTAS assistance in close quarters.

The F-4J Phantom is an upgrade of the previous F-4B variant, designed with the intent to improve the Phantom's air-to-air combat capabilities, based on lessons learned in combat during the Vietnam War. These upgrades included a more advanced radar (the AN/APG-59 pulse-Doppler radar), an improved fire control system, upgraded engines, increased options for secondary ordnance, while the infrared sensor under the nose was omitted. Over 500 F-4Js were built from 1966, and saw action at the end of the Vietnam War during Operation Linebacker in 1972. Lt. Randy "Duke" Cunningham and Radar-Intercept Officer Lt. Junior-Grade Willy Driscoll became aces while flying an F-4J, after shooting downing three MiG-17s on May 10, 1972.