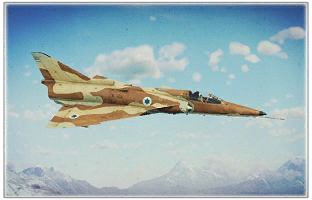 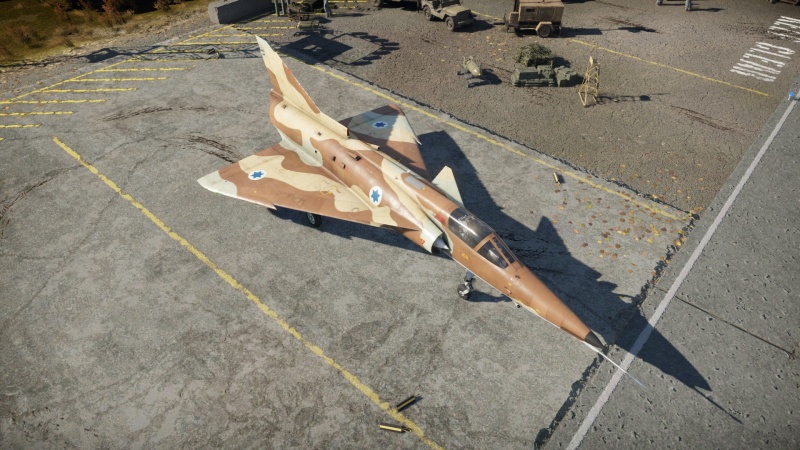 The IAI Kfir is a Israeli development of the Nesher, itself a variant of the French Mirage 5. The delta-winged Mirages are known for their low wing loading and sleek aerodynamics, but their engines tend to be underwhelming. The Kfir rectifies this with an American J79 engine as seen on the F-4 Phantom and F-104 Starfighter, which offers vastly more thrust, and fixed canard foreplanes mounted on the air intakes to compensate for the weight changes. The end result is an aircraft with incredible acceleration and high agility, a dangerous opponent in dogfights.

The Kfir's weapons leave something to be desired, reflecting its real-life usage as a basic fighter-bomber. It can carry an impressive payload of bombs and rockets but lacks radar-guided missiles for BVR combat. Its best dogfight missile is the AIM-9G Sidewinder, which is less manoeuvrable than the contemporary R-60 and Matra Magic for example. It also does not have guided air-to-ground weapons used by the Israeli F-4E. Thus, the Kfir requires a skilled pilot to take advantage of its excellent performance to win engagements.

The Kfir C.7 has an impressive acceleration, even higher than the MiG-23MLD's. The plane can also turn quite well, but it is not recommended to turn while in combat as the delta wing configuration will bleed a lot of speed and a slow jet is an easy target. However, you can take the risk to bleed speed in some situations since you regain that speed rather quickly.

The Kfir lacks any armour surrounding the pilots, making HE hits (missiles and cannons) able to penetrate and hit the pilot with ease.

Survivability of the Kfir is far greater than any of its contemporaries even though it lacks armour. The Kfir can sustain black fuselage damage, and ripped wings can have more than enough control authority to return back home and repair.

The Kfir C.7 is armed with:

The Kfir C.7 can be outfitted with the following ordnance presets:

The Kfir C.7 is one of the fastest accelerating and best climbing planes in the game, its performance at >1,234 km/h and high altitude is particularly exceptional, on top of being highly manoeuvrable, though the plane will compress when going above Mach 1. This does help the Kfir maintain energy, but once it falls out of that compressed state it will pull, and pull hard. With the speed and acceleration advantage the Kfir offers, it suffers from its own success as the wings will rip at 1,460 km/h which can easily be exceeded with the Kfir if speed isn't being kept in check.

The Kfir suffers from the same issue as other delta wing designs such as the J35 (Family) and MiG-21 (Family), and Mirage (Family) (which it's derived from), in that it bleeds quite a bit of speed while performing manoeuvres, and therefore sustained dogfights are not recommended in the Kfir. It will perform exceptionally well for the first few turns, so attempt to shoot down the target within that window. If unable to dispatch the enemy and the fight is being prolonged, then it's recommended to use the Kfir's exceptional acceleration and top speed to egress from the situation, and perhaps re-enter when the situation is more favourable to the Kfir.

One way of playing the Kfir C.7 is to accelerate past Mach after takeoff, and then proceed to zoom up to high altitude at roughly 8-10 km where missiles are capable of flying much further, where the Kfir can truly stretch its exceptional speed and performance. Its primary weapon, the AIM-9G Sidewinder, will have an exceptional range at these altitudes and it is not uncommon to achieve kills at ranges over 6-7 km. Be mindful that the radar will slave the seeker head of the AIM-9G Sidewinder, and can be used to help achieve locks even if the plane is not directly off the nose of the aircraft.

The Kfir is a phenomenal support fighter.

Due to its lack of radar and low countermeasure count at EC7 you do not want to spear head any fight. Your best way to play the plane is to stay 1-2 grid squares away from the main battle and wait for people call out enemies or for you to spot dog fights.

The Kfir's top speed will grant you the ability to close distances on targets and rescue team mates with ease. While its high alpha capabilities and strong airframe will allow you to slot into enemies tail's if needed.

The Kfir will begin to wing rip at 750 knots IAS. This is displayed on the left of your HUD allowing you to easily manage your speed without excessive head movement or taking your eyes off your target.

The AIM-9G locking is at the bottom of your HUD, this can be difficult to learn, but once you do, it is not a big issue.

In the 1960s, French and Israeli engineers worked together to develop the Dassault Mirage 5, successor to the Mirage III, tailored specifically to the requirements of the Israeli Air Force (IAF). Israel funded a large part of the project by purchasing a total of 50 aircraft in advance of their production. The deal eventually fell through when France enacted an arms embargo on Israel following its preemptive strike at the start of the 1967 Six-Day War - an action that the French had explicitly warned Israel not to take. Though Israel was eventually reimbursed for its payments, the Mirage 5 was never supplied.

To circumvent the embargo, Israel collaborated with the Dassault Aviation company to smuggle blueprints and materials out of France to construct their own copy of the Mirage 5 - the IAI Nesher. One of the most successful air superiority fighters of all time, the Nesher scored a staggering 111:3 kill ratio during the Yom Kippur War of 1973. This not only proved the merits of the Mirage 5's design, but also proved that Israel was now capable of manufacturing warplanes locally. This fact was of utmost importance to the Israelis: up until that point they had been completely dependent on the French to supply their aircraft, and were now left orphaned due to the embargo.

Thanks to a gradual warming of relations with the United States, the IAF could begin arming itself with A-4H and F-4E Phantom II jets, which served mostly as ground attackers; but neither could replace the Nesher as an air superiority fighter. With the looming threat of more advanced Soviet fighters entering service in the Arab air forces, Israel was keenly aware that the Nesher could not remain the top dog for long. Israel's response to this threat was to begin development of an advanced fighter jet based on the Mirage 5 design - one that could be manufactured from scratch in Israel.

A major factor in the design of the new plane was its engine. Israel had already acquired a license to produce the powerful General Electric J79 turbojet - the engine used in the F-4E. Thus, it was decided that the new Mirage 5 variant would be built entirely around this engine. This required several major changes to the airframe, primarily a redesign of the fuselage and enlargement of the air intakes (even adding a small cooling intake in the tail). As per their usual doctrine, the Israelis also installed a completely new advanced avionics package into the cockpit, altering it significantly. Another, more noticeable feature was the addition of two small canards on either side of the intakes.

The resulting aircraft, the IAI Kfir ("Lion Cub"), entered service in 1975. However, its primacy in the IAF was supplanted almost immediately by the arrival of the first F-15s in late 1976, and later by the F-16s. The Kfir was therefore relegated to a fighter-bomber role during the 1982 Lebanon War.

The Kfir C.7, being the third and most advanced variant of the Kfir in IAF service, was designed to fit the aircraft's new role "underneath" the F-15 and F-16. It was built more robustly, and carried a stronger version of the J79 engine that could help it take off with a heavier payload. It had additional hardpoints for carrying extra munitions, and much larger canards than the original design. All Kfir C.7s were in fact upgraded Kfir C.2s, rather than brand new planes.

Despite being originally designed as an air superiority jet, the Kfir only scored a single aerial kill throughout its service in the IAF. Its last action in the IAF occurred during the 1993 Operation Accountability, after which it was gradually removed from service. An export version of the plane, however, was sold to Colombia, Ecuador and Sri Lanka, and still serves in their air forces in 2021, with constant upgrades. The plane took part in combat once again during the (1983-2009) Sri Lankan Civil War from 1996 after introducing the Kfir to it's Air Force.

Immediately after the Six-Day-War, France imposed an arms export embargo on Israel, acutely highlighting the nation's dependence on foreign suppliers of military equipment. Despite the embargo, Israel managed to obtain documentation for the Mirage 5J version, which was developed specifically for the Israeli Air Force before the ban. These aircraft were produced commercially under the name IAI Nesher. But due to the end of supplies from France, Israel turned to the U.S. for assistance, procuring a number of new F-4 Phantom II and A-4 Skyhawk aircraft for its air force. However, when the air force compared the Nesher with the new F-4 Phantom, it realized that the Mirage was falling behind in several aspects. Therefore, plans to outfit Neshers with licence-built Phantom II engines - the General Electric J79 - were drawn up and soon afterward realized with the Kfir (Hebrew for "Lion Cub").

Entering serial production in 1975 and subsequently being commissioned into service with the 101st, 113th and 109th squadrons of the Israeli Air Force, the Kfir first saw combat action in November 1977. While the aircraft performed well and was also well-liked by its pilots, the modification did increase the weight of the aircraft, negatively impacting some of its flight characteristics. Israeli engineers solved the issue by outfitting the Kfir with fixed canards on the forward section of the fuselage.

The Kfir C.7 is a later modification of the aircraft, resulting from continuous efforts of Israeli engineers to further develop the Kfir. The new version featured numerous improvements, including a more powerful afterburner, increased payload and weapon selection as well as new avionics and cockpit arrangement. The Kfir C.7 entered service in 1983 and would remain in active service until the early 1990s before being officially decommissioned by the Israeli Air Force. Subsequently, some units were sold on the export market to Columbia and Sri Lanka where they saw active combat during the Sri Lankan Civil War.