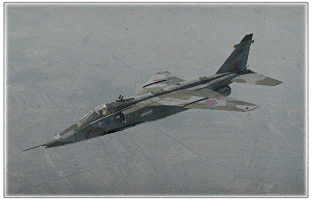 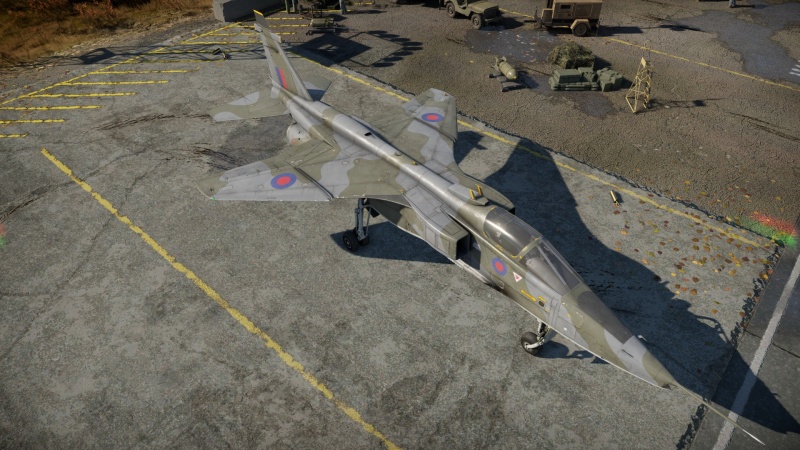 The Jaguar GR.1 is a rank VI British strike aircraft with a battle rating of 9.7 (AB/RB/SB). It was introduced in Update "Raining Fire".

The SEPECAT Jaguar is a strike aircraft co-designed by British and French engineers in the late 1960s/early 1970s, and remains in service today with the Indian Air Force. It is fit with afterburning engines and totes an incredibly heavy air-to-ground payload, with full ballistics computer capability to match, though its flight performance does not lend well to air-to-air combat.

The Jaguar GR.1 has no armour plating or armoured glass. The entire wingspan of the Jaguar GR.1 is composed of fuel tanks, along with most of the upper fuselage, with flight controls being exposed in the "spine" of the aircraft, making it very vulnerable to damage received anywhere along the mid-section or wings of the aircraft.

The two jet's engines take up a small amount of room in the very rear of the fuselage and the Jaguar's elevators are separated from each other, allowing the aircraft to potentially survive a glancing blow to its tail section. The Jaguar's nosecone is also devoid of any avionics, and the pilot is seated relatively far back, causing strikes there to deal little damage.

The Jaguar GR.1 is fit with an AN/APR-25 radar warning receiver inside the vertical stabiliser, providing the pilot with advanced warning when being tracked by a radar system, such as an advanced anti-air emplacement or fighter aircraft.

The Jaguar GR.1 is armed with:

The Jaguar's ADEN Mk.4s are excellent against air targets, capable of dealing critical damage even with glancing blows and otherwise outright destroying aircraft with a single hit, although their ballistics are only average compared to the Jaguar's opponents and the cannons are not particularly lethal against ground targets with any amount of armour.

As the ADEN Mk.4 is typically only used in air-to-air engagements, it may be advisible to steer away from the Ground targets belt, and instead use one of the other three to increase the number of high-explosive shells in the belt.

The Jaguar GR.1 can be outfitted with the following ordnance:

As a strike aircraft, the Jaguar GR.1 is well-suited to engaging ground targets with its ability to carry up to eight 1,000 lb bombs and access to a complete ballistics computer allowing it to shine in this role, particularly in ground battles. The aircraft's moderately high speed and good agility allow it to easily manoeuvre near terrain while providing close air support, although the aircraft bleeds considerable energy in turns making it highly unsuitable for air-to-air combat.

The Jaguar GR.1 includes a pair of internal ADEN Mk.4 30 mm cannons for self-defense against aircraft, and can additionally be fitted with a pair of AIM-9G Sidewinder missiles, at the expense of two bombs, allowing the Jaguar to pose a threat to enemy fighters in its airspace, and making it particularly lethal against distracted aircraft, although the Jaguar's poor energy retention and top speed only barely cresting mach 1.0 make it vulnerable to the many dedicated fighters it can face in battle. Where possible, the Jaguar should be employed in combat with supporting allied aircraft, particularly in air battles.

The aircraft features a drag chute, air brakes, and an arresting hook, as well as large landing flaps, making landings with the Jaguar simple and quick. Given the Jaguar's high speed (when not manoeuvring) contrasted with its mediocre dogfight capability and the ADEN's relatively poor performance in ground strike, the Jaguar is best when it relies on its secondary weapons, returning to the airfield once they are expended rather than remaining in combat when it is down to only its 30 mm cannons.

MiG-21 (Family) - As a western aircraft, the Jaguar GR.1 often faces operators of the MiG-21's many variants. The MiG-21F-13 and J-7II are dangerous opponents, with their 30 mm cannons easily destroying the Jaguar in a single hit, although their missiles are not typically a threat; they are the equivalent of AIM-9Bs, and can lose track if the Jaguar is further away or turning. Ideally, these planes will engage the Jaguar when it is distracted or at lower speeds. The MiG-21SMT and MF variants of the jet are much more serious threats, featuring higher performance and the deadly R-60 missiles, with the Jaguar GR.1's lack of countermeasures leaving it seriously vulnerable to these aircraft.

F-4 Phantom II (Family) - The Jaguar GR.1 typically only encounters the F-4C Phantom II variant in realistic battles which, although suffering from the same dogfighting deficiency as the Jaguar, carries a much more lethal missile payload as well as an air-to-air radar. The F-4C's AIM-7D Sparrows are very potent against the Jaguar GR.1 as, although it has a radar warning receiver to alert the pilot of the threat, the Jaguar's lack of chaff gives it little response to an incoming missile, and the F-4C's GAU-4 20 mm cannon and AIM-9E Sidewinders are a notable threat to the Jaguar at closer ranges.

F-5C - The premium F-5C Skoshi Tiger is perhaps the biggest threat the Jaguar GR.1 will face on the battlefield. With a noticably superior engine, considerably better dogfight characteristics, and a full countermeasures package, the F-5C is capable of out-manoeuvring the Jaguar at every turn, and its flares make the Jaguar's AIM-9G Sidewinders almost entirely useless against a Skoshi Tiger pilot aware of their launch. To make matters worse, the F-5C's incredibly durable airframe means that the Jaguar is not guaranteed a victory even should it successfully hit the aircraft. 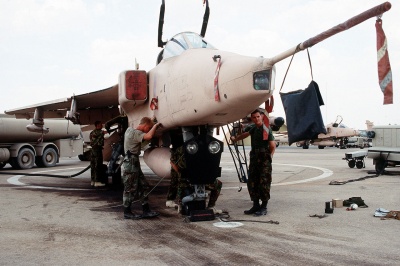 The SEPECAT Jaguar was a joint program between the British and French to develop a cheap subsonic trainer and light attack aircraft. The British and French bought a total of 403 aircraft with Britain receiving 203 of the aircraft. Other exports include to the Indian Air force (160 total aircraft ordered ), The Royal Air force of Oman (26 total aircraft ordered), The Ecuadorian Air force (12 total aircraft ordered) and the air force of Nigeria (18 total aircraft ordered). The Jaguar was used in several military conflicts in countries such as: Mauritania, Chad, Iraq, Bosnia, Pakistan and The Chenepa war but most notably it saw service in the 1990 Gulf War during Operation Desert Storm, where it was used to destroy Iraqi artillery and missile positions. During the Bosnian bombing campaign of 1995 Jaguars of the 41 squadron carried out the first raids in Europe since the second world war. During the Bosnian airstrikes jaguars were fitted with laser designators and would laze Bosnian-Serb forces for RAF Harriers to strike. These re-fitted more modern Jaguars were re-designated as SEPECAT Jaguar GR.1 B.

In the early 1960's, both Great Britain and France were looking into procuring a new jet trainer for their respective air forces. Despite differences in specifications and requirements, the two nations were united in their pursuit for such a new aircraft, thus leading to an agreement being signed in 1965 which would kick off development of what would eventually become the Jaguar.

The Jaguar was being developed under a specially formed consortium of British and French aviation companies, namely Breguet and BAC, called SEPECAT (you can look up what the acronym stands for on your own - we promise you won't be disappointed though). Continuing with the theme of joint projects, Rolls-Royce and Turbomeca also joined forces to develop a new turbofan engine - the Adour - for the new aircraft.

The first of eight prototypes of the Jaguar successfully conducted its maiden flight in September of 1968. Following the conclusion of further testing, the Jaguar went into production in two major variants - the Jaguar A being the modification used by the French Air Force and the Jaguar S (Jaguar GR.1) being the variant employed by the RAF. Both variants of the machine entered production in the early 1970's, with the first production models being delivered in 1973/'74.

The Jaguar primarily served with France and Great Britain, most notably distinguishing itself in action during the Gulf War of the 1990's. However, Ecuador, Nigeria and Oman also operated modifications of the Jaguar, while India still operates the Jaguar to this day. In total over 540 SEPECAT Jaguars were built.