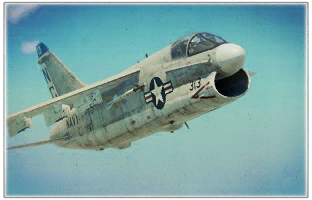 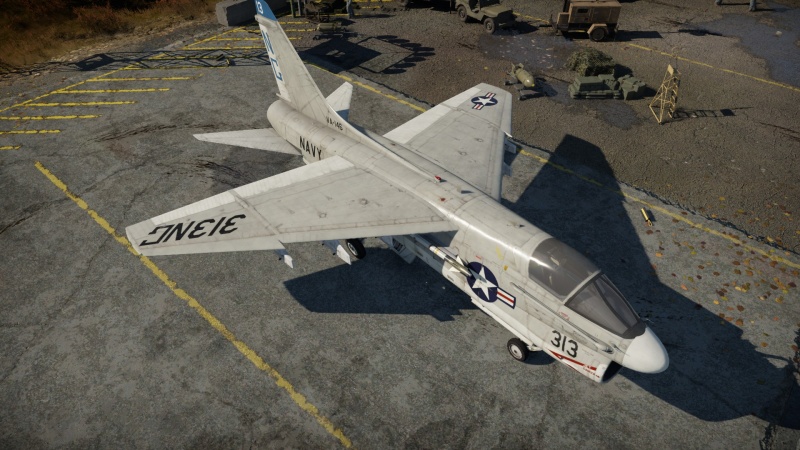 The A-7E Corsair II is a rank VII American strike aircraft with a battle rating of 10.7 (AB/RB) and 10.0 (SB). It was introduced in Update "Ground Breaking". The A-7E Corsair II is among the most capable ground attack aircraft in the game, sporting a variety of air-to-ground payloads including large calibre rotary cannon pods, unguided bombs and rockets, and medium range guided bombs. Additionally, CCIP and CCRP can be used for accurate usage of unguided weaponry, while an optional FLIR pod grants night vision and thermal sights to easily spot targets. This supreme air-to-ground capability comes with a hefty price; the A-7E is strictly limited to that ground attack role, as it has very slow speed and poor manoeuvrability which leaves it basically helpless in air-to-air combat.

The A-7E can be outfitted with the following ordnance presets:

Ground RB is where the A-7E truly shines. Its poor flight performance and manoeuvrability is less of an issue due to a lessened fighter presence. In Ground RB, the A-7E's most potent weapon is the AGM-62A Walleye I ER guided bombs. These bombs are fire-and-forget and can still reliably hit a target point from more than five kilometers away. However, it has trouble tracking moving targets, so don’t expect to reliably hit moving targets.

Additionally, a FLIR pod can optionally be carried in place of one Walleye guided bomb. This pod grants night vision and thermal imaging capabilities, allowing for significantly easier location of enemy vehicles. It is highly recommended to sacrifice a Walleye for the FLIR pod, as the Walleye's targeting sight uses very dark colors which at long distances make enemy tanks hard to distinguish from other common objects such as rocks. Even so, when using the FLIR pod, it can be easy to mistake dead tanks for alive tanks as they both give off generally similar thermal images. The best way to recognize an alive tank is the lack of particle effect (dead tanks are burning).

When you first spawn in with the Walleyes, you must first gain some altitude. As the A-7E is very slow, it is essential that if you you enter directly above the battlefield, it is at higher altitudes (at the very, very least 5 kilometers) to ensure safety from enemy SAMs. Be sure to take note of who your opponent is; if you are facing China, their Tor-M1s have a long range, so to stay safe try to climb to at least 6.5 kilometers.

Once you are at this altitude, enter a shallow dive to point your sights down and locate targets using either the Walleye's own targeting sight or the FLIR pod. Ideally, you will be high enough that SAMs cannot reach, so you can focus mainly on locating targets. A good place to look is the enemy spawn, where SAM vehicles generally tend to reside. As they are poorly armored and usually stationary, the Walleyes inability to reliably track moving targets is less of an issue. Once you find an enemy, simply lock on to them with the bomb and drop the bomb. After this, you don't need to worry about the dropped bomb as it is fire-and-forget (no outside input is needed once it's dropped).

With many strike aircraft, this is where you would pitch back up and regain your lost altitude quickly to get out of SAMs range. However, the A-7E is slow and accelerates poorly, so doing this repeatedly will make you quickly lose altitude, putting you into SAM range. Therefore, a good way to use the Walleyes is to drop most or all of them in one run, exploiting it’s fire-and-forget capability. Once at high altitude, pitch down and deploy your airbrake to give you more dive time to search for targets. Use your FLIR pod to quickly locate an enemy, and when one is found, drop a Walleye on them, and quickly rinse and repeat five more times. Once your bombs are expended, continue the dive and level out at very low altitude to avoid any SAMs. After this, you can reclimb to drop any remaining bombs, use your gun and AIM-9s for air defense, or to go back to base and rearm.

In Air RB, the A-7E is unfortunately extremely outclassed. Its potent ground attack capabilities offer minimal advantages in Air RB, and you are left only with its poor flight performance and bad manoeuvrability. Your best bet will be to attack ground targets in Air RB using your cannon. Don't try bombing bases as you are simply too slow; either other planes will get to the bases first, or the enemy will get to you first.

If you do want to attempt air combat in air RB, the A-7E does also have the ability to carry long range AIM-9G missiles, which can be used in conjunction with the potent cannon against distracted enemy fighters. Additionally, either the 20 mm M61 or 30 mm GAU-13/A rotary cannons can be equipped for devastating frontal firepower, though this significantly decreases overall flight performance and manoeuvrability. One can make use of the A-7's reputation of being poor at air combat to bait people into stealth belt head-ons (especially if gun pods are equipped), though this strategy is defeated if the enemy chooses to simply go up to simultaneously avoid your guns and energy trap you. The large quantity of countermeasures may improve survivability somewhat, but the poor manoeuvrability means if there is an enemy fighter on your tail trying to kill you with guns, you probably won't be able to shake them off and survive. Overall, for air combat in Air RB, the A-7E will always be severely limited by its poor flight performance and manoeuvrability, and this sees that you simply won't be doing much other than taking all head-ons or getting lucky kills.

Main article: History of the A-7 Corsair II

The last iteration of the Corsair II series adopted into the US armed services was the A-7E. This aircraft operationally ran from 1968 until it was retired from service in 1991. Other countries, Thailand, Portugal, and Greece continued to utilize the A-7E, with Greece being the last country to fly this aircraft, finally retiring it from service in 2014.

The A-7E is effectively a modified version of the A-7D upgraded for Naval operations. The main modifications to the aircraft allowed for its use in carrier operations, such as adding an arrestor hook, heavy-duty landing gear, and foldable wings allowing for more aircraft storage on or below the deck of aircraft carriers. This aircraft also received the newer AN/APN-190 Doppler ground speed and drift radar and the AN/APQ-128 terrain-following radar, which allowed for ground-hugging or terrain-hugging flight, making it more difficult for enemy radar units to detect the slower flying aircraft. As for the weapon loadout, this aircraft continued using the 20 mm M61-A1 rotary cannon and had two fuselage hard points for AIM-9D Sidewinders and up to six underwing hardpoints, which allowed for mounting of various rockets, missiles, or bombs.